The COVID-19 pandemic continues to impact the mobile app ecosystem, according to an annual retrospective released today by app intelligence firm Sensor Tower. In the early days of the pandemic, a number of apps saw rapidly increased usage — like that focused on online shopping, entertainment, business and education, for example. Though much of the world has since opened back up, things aren’t quite back to normal on the app stores. Some app categories are still seeing download volume well above pre-pandemic levels, while others haven’t yet fully recovered, the new report found.

Travel apps, naturally, were dealt a major blow by the pandemic, as countries closed their borders to visitors and tourists and in-person events were canceled. In addition, the rise of remote work led to less need for ridesharing apps and others associated with a daily commute. Combined, the travel and navigation app categories were the hardest hit by the pandemic, with installs dropping around 40% in April 2020 compared with 2019 totals. 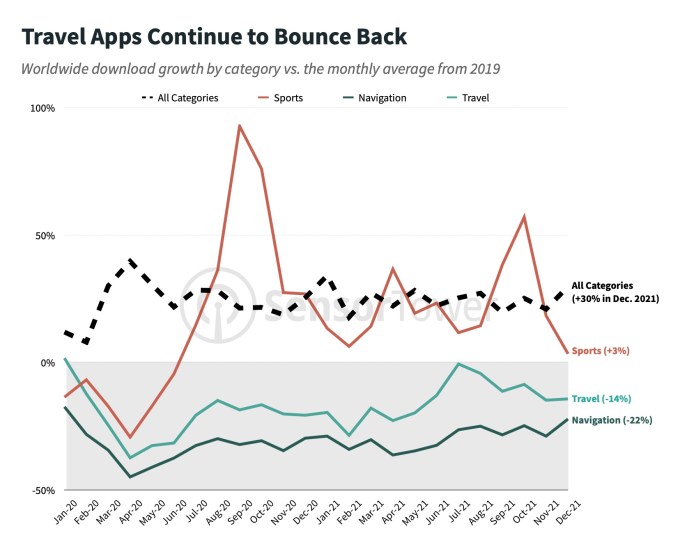 It’s clear the travel category, as a whole, still lives and dies by COVID’s ebbs and surges. As things began looking up in the summer months, for example, travel apps started to see a return to growth. And by the peak of summer travel in July 2021, travel apps had nearly reached their 2019 average, Sensor Tower said. But as the Omicron variant emerged, travel apps saw those gains start to subside. As of December 2021, travel apps were again down by 14% compared with 2019 levels, while navigation apps were down by 22%.

Other app categories were less impacted by the day-to-day battles with COVID surges, and may instead represent trends that have shifted for the long term. Business apps are a key example. Installs in this category remain high as many companies embraced full-time remote work — or have at least have delayed their return-to-office plans amid the Omicron surge. Overall in 2021, business app download growth was still more than double pre-pandemic levels (+102%). 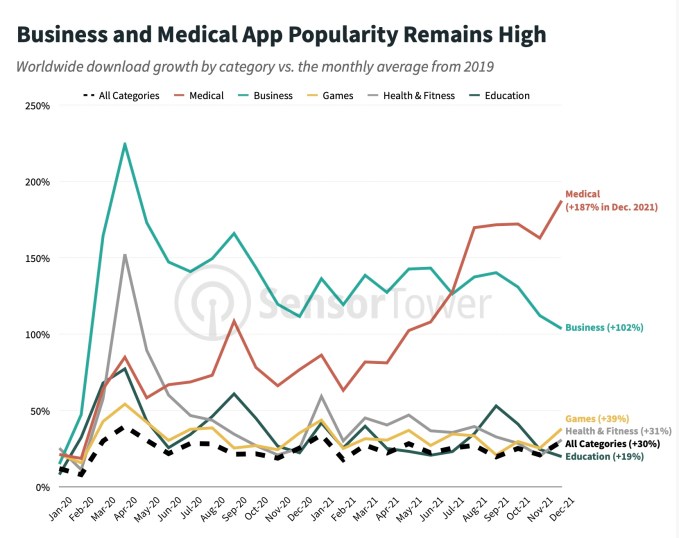 Medical apps, obviously, also saw increased use during the pandemic. (And if they’re a proxy for how well the fight against COVID is going, then things are not looking good!) The category has climbed significantly from 2019 levels, with download growth up by 187% in December 2021, compared with the monthly average in 2019.

Other app categories continue to benefit from the pandemic-driven growth, but to a lesser degree. The Games, Health & Fitness and Education app categories, are still up by 39%, 31% and 19%, respectively, over their 2019 levels. Sports apps quickly bounced back when leagues reopened in the second half of 2020, and were up a more modest 3% in 2021 over their 2019 levels.

The normalization of app downloads over the course of the pandemic has varied from country to country, the report also noted. North America saw the quickest return to 2019 totals compared with other regions. Meanwhile, the pandemic’s impacts lasted longer in Asian markets where games are still nearly 40% higher than pre-pandemic levels as of Q4 2021 and travel app installs are still down by 25%.

In addition, some top U.S. travel apps are above pre-pandemic levels, including those for airlines, vacation rentals and travel agencies even as navigation and rideshare apps remained depressed. In European markets, growth is starting to return but the top apps in each travel subcategory were still lower than their pre-pandemic totals, as were navigation and ride-sharing apps. (See below.) 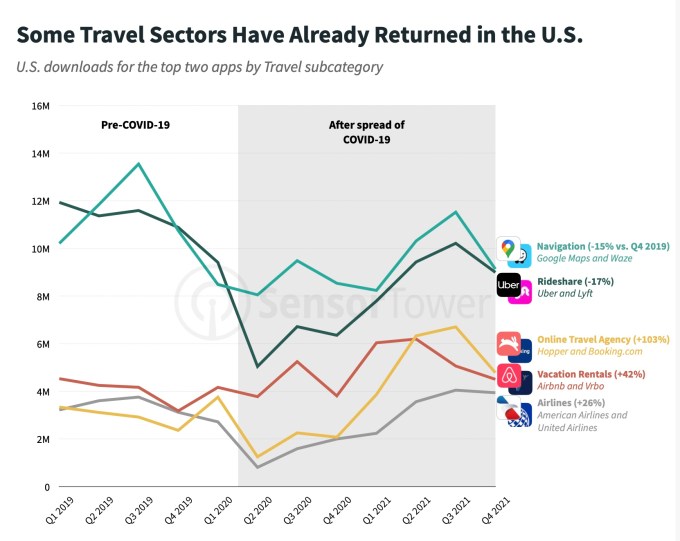 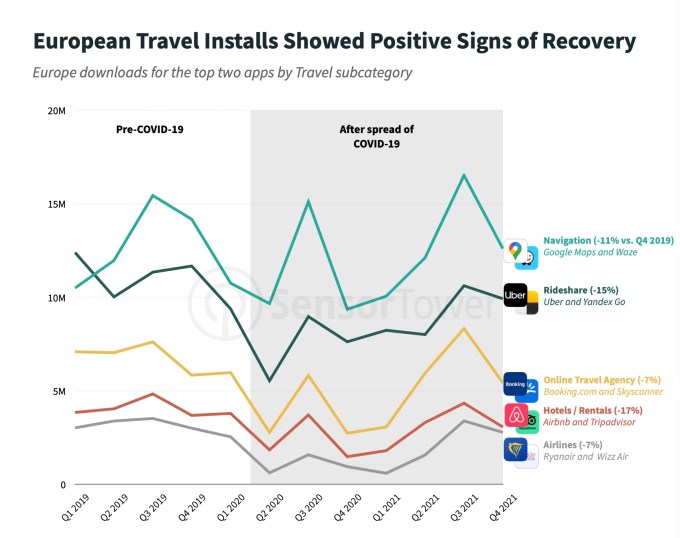 Sensor Tower notes that its figures don’t include Apple and Google’s own pre-installed apps or third-party Android app stores outside of Google Play.

The firm’s full report delves into other notable 2021 trends, including cryptocurrency’s move to mobile over the past year, driving 35% year-over-year growth for the finance category by Q4 2021. In gaming, Garena Fire Free finally came out on top in terms of downloads, beating out 2020’s top game Among Us, and 2019’s winner, PUBG Mobile.

Of course, install growth is only one way of examining the pandemic’s impacts on the app economy. The increased usage of apps overall has also helped drive consumer spending on apps to new levels. In the third quarter of 2021, apps stores saw record revenues of $28 billion in consumer spending and were on track for $133 billion for the full year.