Consumers worldwide have downloaded Meta’s Oculus app, the mobile companion for Oculus VR devices including the Quest 2, roughly 2 million times globally since Christmas Day, according to new data from third-party app intelligence firms Apptopia and Sensor Tower. Already, there had been some indication that the Quest 2 was a popular holiday gift after the Oculus app shot to the top of the Apple App Store for the first time ever on Christmas Day and became the most popular free app on Google Play in the U.S., as well.

During the week of Christmas in the U.S. (December 23-29), adoption of the Oculus app jumped up by 517% week-over-week to reach 1.5 million installs, Sensor Tower’s data indicates.

In the week that followed, the firm saw those installs drop 77% to 345,000 from December 30 through January 5, but this figure is still higher than the week before Christmas 2021 by 42%. And it’s likely that these more recent downloads still include those who recently received a new Oculus device for the holidays, but hadn’t gotten around to setting it up yet.

While the U.S. accounted for the majority of the post-Christmas installs, app intelligence firms estimate that, in total, the app has seen around 2 million global installs from Christmas Day through the present across the App Store and Google Play combined.

Sensor Tower’s estimate is a bit more conservative on this front, as the firm said the app saw around 1.8 million installs globally from December 31, 2021 through January 5, 2022. Meanwhile, Apptopia reports the Oculus app was downloaded 2.189 million times worldwide from Christmas through the present day. Of those 2 million-plus installs, around 79% (or 1.727 million) were attributed to U.S. consumers, it noted. 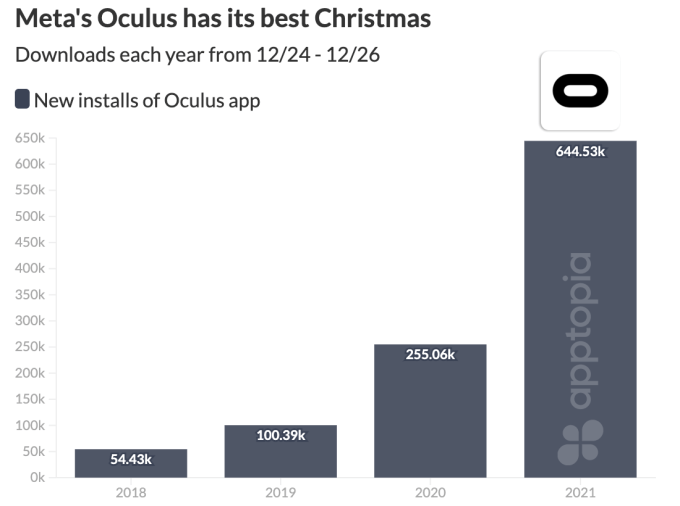 To put these numbers in a broader perspective, the app’s 2021 holiday install figures are closer to the total number of yearly downloads the app had seen in its earlier days.

Sensor Tower’s data is still a bit more conservative here, finding the app had been downloaded a little more than 8 million times worldwide in 2021 across the App Store and Google Play, not 10.6 million.

But regardless of which numbers are closer to accuracy, both firms agree that in just a handful of days since Christmas, the Oculus app has gained somewhere in the ballpark of 2 million more downloads.

Meta did not yet reply to a request for comment on the third-party estimates, but the most recent Quest 2 adoption figures are from Qualcomm, whose chipset powers the new VR devices. The company said in November 2021 that Meta had shipped 10 million Quest 2 units to date.

The Oculus app works with the company’s legacy products (Rift and Rift S), but these new downloads aren’t likely for discontinued products, but rather the Quest 2. Meta first began shipping the Quest 2 in October 2020, which means it has over a full year under its belt as the company’s flagship device — one meant to make VR adoption more affordable at its $299 entry-level price point. And after Facebook announced its big rebrand to Meta last year and detailed its plans for the “metaverse,” more consumers may have found themselves interested in exploring VR for the first time, contributing to the recent install growth.

Although app downloads aren’t generally a proxy for real-world adoption, in Oculus’ case they can help paint a picture as to how many consumers may have recently bought — or were gifted — a new Oculus VR device. The app allows consumers to download new VR apps and games and find friends to connect with in VR, so it’s something most Quest 2 owners will choose to install.

As of January 5, the Oculus app has dropped in the U.S. App Store rankings, which take into account both installs and velocity, among other factors. It’s now No. 111 Overall but a respectable No. 10 in the Entertainment category where it’s listed.

In addition, Apptopia reports the app is seeing decent engagement from its new users. The firm estimates the Oculus app has 2.41 million daily active users — above previous levels. This figure indicates that users didn’t just set up the app once then abandon it, but are still actively exploring the VR world.