General Motors just pulled the sheet off the Chevrolet Silverado EV. It has a range of 400 miles, up to 664 horsepower and a starting price of $39,900 for a basic work truck edition. The fully loaded, four-wheel steering RST First Edition costs $105,000. Both will hit production lines in 2023. Can’t wait? Get in line for the slightly more expensive GMC Hummer EV; it’s nearly the same vehicle.

Today, General Motors CEO Mary Barra unveiled the vehicle at a CES 2022 virtual keynote address. Along with announcing Chevy’s answer to the Ford F-150 Lightning, the company also announced several other mass-market electric vehicles and plans to sell personal autonomous vehicles by the middle of the decade. 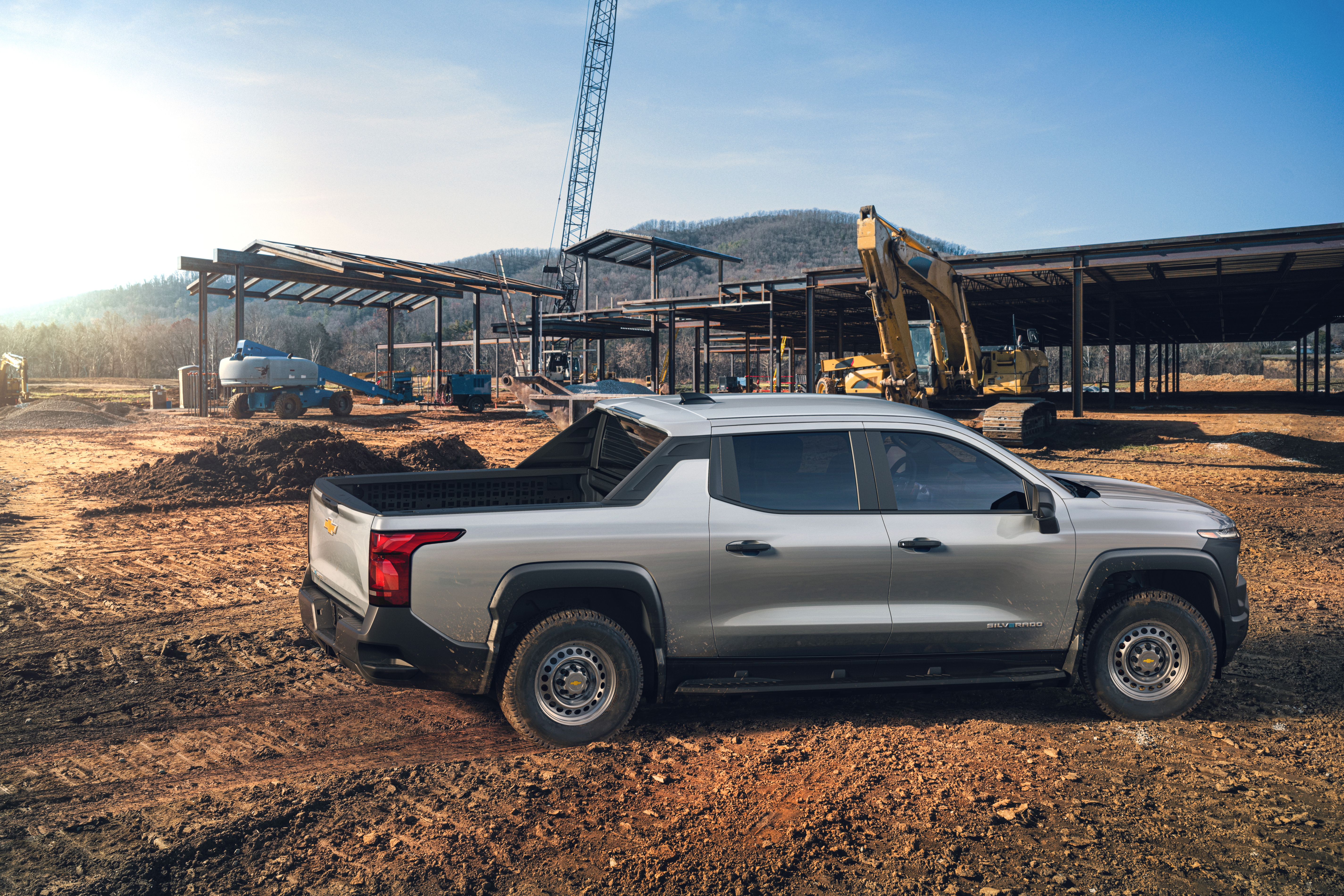 The Silverado RST First Edition features a bevy of technology enhancements. It shares the same four-wheel steering and adaptable air-ride as the Hummer EV. A massive 17-inch LCD screen sits in the center, while the driver gets an 11-inch screen and a huge HUD. This edition also has Chevy’s Advanced Trailering System.

GM released less information about the $39,900 Work Truck edition. It will sport less power, with 510 HP and 615 lb-ft of torque instead of the 664 HP and 780 lb-ft of torque found in the RST model. In addition, it features a towing capacity of 8,000 pounds, down from 10,000 pounds. The interior is likely to be radically different, as well, and will feature a dashboard without the huge LCDs found in the $105,000 RST model.

Both the WT and RST edition feature public DC fast charging capabilities (350 kW), gaining 100 miles of range in 10 minutes. Like the Ford Lightning, the Silverado EV can act as a 110v generator, but the Chevy has a maximum output of 10.2 kW, up from Ford’s 9.6 kW.

There’s history between Chevy and Ford. The two automakers have long chased each other’s developments, and Ford beat Chevy by months when it announced the Ford F-150 Lightning in May 2021. Since then, Ford was overwhelmed with reservations and announced earlier this week it was doubling production to hit 150,000 vehicles a year by mid-2023.

General Motors said today it intends to start producing the $39,900 Chevy Silverado Work Truck in spring 2023. In addition, the RST First Edition is slated for production starting in fall 2023. Eventually, Chevy expects to bring more trim levels to marketing, including an off-road themed Trail Boss edition, which was previewed today.

The Ford F-150 Lightning and Chevrolet Silverado EV are fundamentally different vehicles for the first time. The two automakers took different approaches. The Ford F-150 Lightning is built on a traditional body-on-frame platform. This is the same arrangement that’s used in today’s Ford F-150, Chevy Silverado and the rest of the pickup market. General Motors instead opted for a unibody affair that merges the body and frame into one piece. This is the same construction used on the Tesla Cybertruck too. This arrangement often results in a more rigid structure, but often at the expense of towing and cargo capacities.

The electric truck market is quickly expanding, and the Silverado is scheduled to hit the market later than some competitors. Production is underway for the Silverado’s cousin, the Hummer EV, and some customers are taking delivery of their pickups. The same is happening at Rivian, with the startup spinning up its first pickup, the R1T. Some customers received their pre-ordered truck in December 2021.

The Tesla Cybertruck is a large unknown looming on the horizon. Elon Musk announced the wild pickup in November 2019, and has yet to reveal many other details. The estimated production timeline was removed from Tesla’s website. The market largely agrees the Cybertruck is still in the works, but the timing is unknown.

General Motors’ EV approach is opening up. The company started with the Chevy Volt back during the dark days of the 2008 auto bailout. Next, it produced its first mass-market EV in the Chevy Bolt in 2017. Then, on March 4, 2020, in the weeks before COVID, General Motors’ CEO Mary Barra announced Ultium, its next-generation EV platform. Since then, despite a chip shortage and global pandemic, the company announced the Hummer EV, GMC Sierra Denali, the Cadillac Lyriq, Chevrolet Silverado, Chevrolet Blazer EV and the Chevrolet Equinox.