There’s always fun tech for pet owners at CES, and 2022 is no different. But a handful of gadgets this year are taking care to treat dogs and cats not just as beloved furry friends but as intelligent animals with their own processes, emotions and even a desire to express themselves.

At the most basic level — which is to say, pretty advanced compared with a few years ago — we have Catlog, a smart cat collar and weight-sensing platform that helps owners keep track of their feline’s daily movements.

The collar senses movement and vibrations, which it correlates with “cat-like behavior” like sleeping, sitting there, washing its paws, eating and drinking — even moving around, which some cats have been known to do. All these actions (including hairballs) gets sent to you through an IoT hub nearly live. And you can look back over your cat’s day to see when and how often they’ve played, slept and so on.

This basic aspect of illuminating a pet’s daily life when you’re not around is a good first step to understanding that they are more than a lap accessory — they exist and do things even when you’re not looking.

Invoxia takes things a little further with its smart collar that tracks your dog’s location but also its heart and respiratory condition. Now, I can’t vouch for the efficacy of this, but given the advances we’ve made in smart watches and other devices that can detect adverse events or conditions in humans, it doesn’t seem implausible at all that something similar could be whipped up for dogs.

Animals have heart and lung issues just like any other animal with those organs, and sadly some breeds are predisposed to them as well. Sure, you can take them to the vet twice a year so she can listen to the dog’s breathing, but why not also have a collar that alerts you if something seems off? Just like with ourselves, an ounce of prevention is worth a pound of cure. 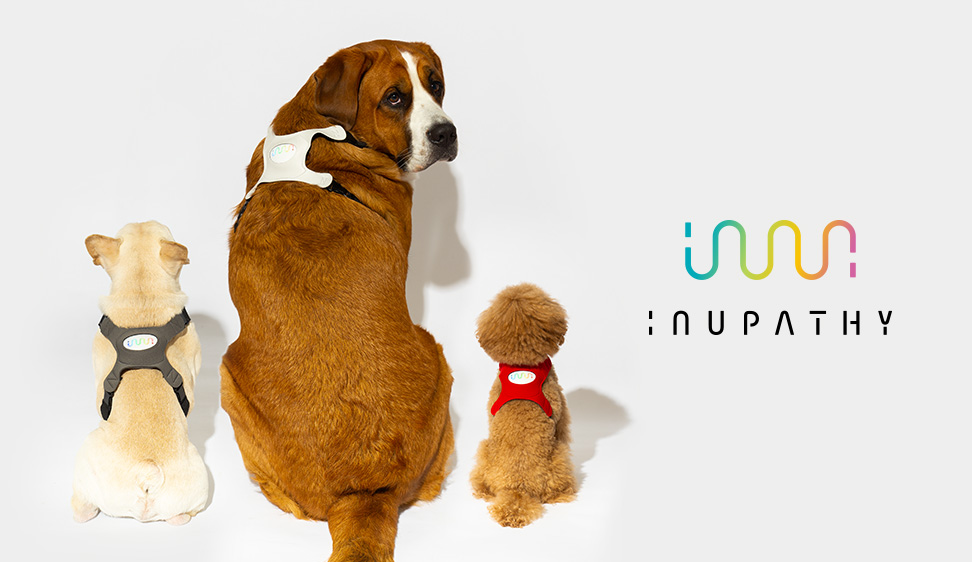 Beyond just detecting physiological signs we find Inupathy, a dog-worn backpack that the company claims can detect a variety of psychological conditions as well. Now, let us not give too much credit here, as human-focused devices along these lines have had very mixed results as well. But Langualess, which makes the backpack, explains their work as follows:

An animal’s heart normally beats at a gentle rhythm, but accelerates when the animal starts feeling nervous. This change in the rhythm is triggered by the sympathetic nervous activity. Through our independent research, we have found that it is possible to estimate the dogs’ mental state in more detail by analysing the heart rate variability in depth.

Heart rate analysis is of course a field with a long and rich history, and one with as many hits as misses. But it is not unreasonable to think that you can tell whether a dog is relaxed, temporarily excited, or entering a prolonged angry or anxious state. The company’s main tech advance has been to create a local sensor and circuit that reliably detects and characterizes the animal’s heart rate.

There are of course more external tells, like tail position, stance and vocalizations, but not every dog is so emotive and anyway, why not add a little more data to the mix?

A propos additional data, Taiwan’s largest applied research institution ITRI showed off its neat iPetWeaR concept, which goes deep on data-driven early warning signals for doggie heart attack prevention. The low-power physiological detection radar technology is harmless – it does not require skin contact with the pet – and can be attached to a pet’s collar or stuffed into a doggie bed for flexible sensing.

The basic US$80 product package includes a sensor device, a collar selected from various options, and a mobile app – and works for both cats and dogs. The company put together an adorable demo video, which of course an excellent reason for us to include it in our roundup:

The physiological data collected by the iPetWear is scooped up and beamed to the pet owner’s phone by Bluetooth. In the case of irregular heartbeat or breathing, a notification is sent so the owner can intervene – and the product promises early detection of a pet’s underlying health condition.

Wagz has been around for a hot minute, and its Freedom Collar introduced virtual geofences so you can ensure your four-legged friends stays put. With GPS tracking, fitness mapping and ‘humane’ corrections (as opposed to a shock collar), the collar has become a popular solution for training pups. New for CES 2022, though, is the addition of Wagz Tagz. The idea is letting the dog roam free around the house, but creating small zones where the pup isn’t allowed. When the collar gets too close to a Wagz Tag, it triggers the geofencing. A great – and super clever – way of keeping Fido off the furniture.

The Wagz Tagz let you create customizable Keep Out Zones from 3 ft to 15 ft to keep your pet safe and away from areas you want to protect. 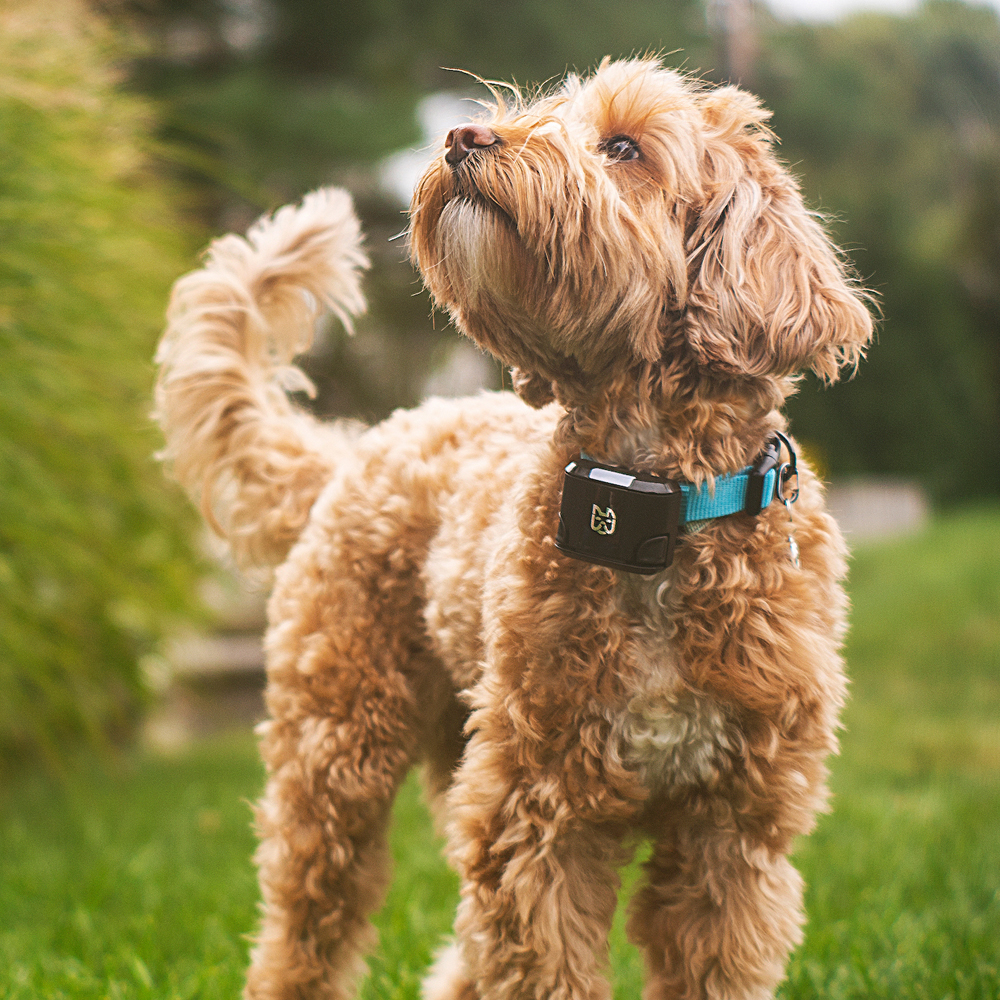 While we’re at it, why not let the dog straight-up talk to you? That’s the idea with FluentPet, which makes a set of buttons for teaching your dog to express itself using human vocabulary. Kind of. 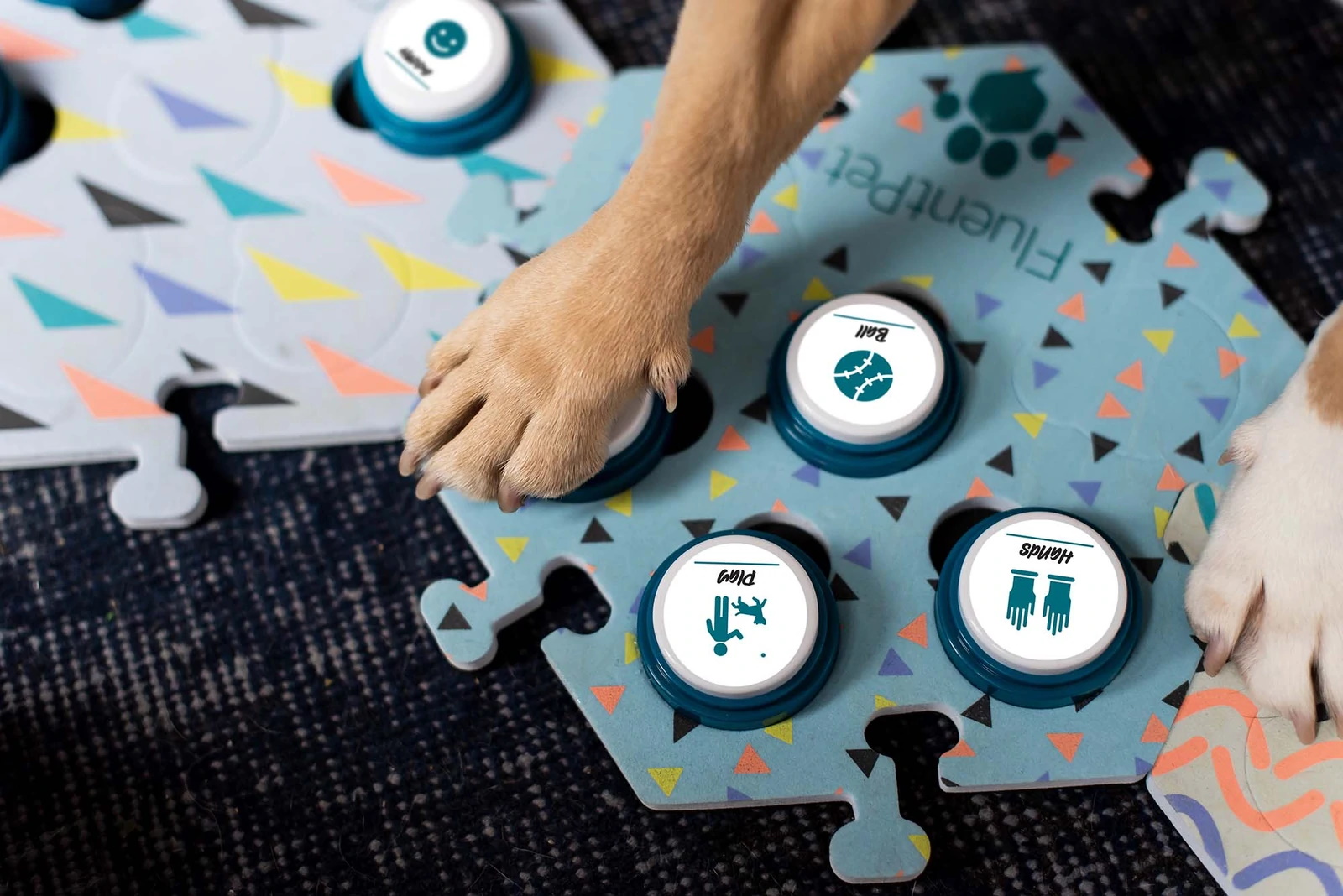 Clearly inspired by the social media stardom of button-expressing canines Stella and Bunny, whose seemingly coherent utterances suggest a richer than expected intellectual landscape, the FluentPet buttons are an easy way to see if your dog is similarly gifted. (Let’s be honest — all dogs are good, but not all of them can reliably form sentences.)

The various kits contain self-contained and labeled buttons that, when pressed, produce a word like “outside,” “food” or of course “love you.” These stick into larger, easily identifiable foam mats (hopefully they don’t taste good) to aid learning by sight.

Does the dog really know what it means when it says “love you”? Perhaps, perhaps not — the love is not in doubt, but it may understand that when it presses that one, it gets pets. Likewise, the food button tends to speed up dinner. And pressing “outside” works faster than staring wistfully at the door. You may not be carrying on full conversations with the dog, but it could be a fun way to change up the way your best friend expresses themselves — because they certainly do that, and sometimes in regrettable ways.