Spotify’s anticipated year-end retrospective, Spotify Wrapped, is rolling out today to consumers, artists and podcast creators. The experience offers Spotify users a look back at their year on Spotify, highlighting listening trends across both music and podcasts. Artists and creators, meanwhile, can check in on all the ways their fans listened. This year, Wrapped has undergone a few changes. This includes the addition of new features like Wrapped Blend, which lets you compare your Wrapped with a friend’s, plus support for TikTok sharing, a new in-app Wrapped game, video messages from artists to fans, and more.

Spotify will also bring its live audio chatroom app, Spotify Greenroom, into the Wrapped experience this year with live shows from select artists.

Typically, Spotify Wrapped offers a look back at your top songs, artists, podcasts and other listening trends from over the past year. But this time around, Spotify will present some of Wrapped’s data as cinematic snapshots — that is, you’ll be presented with “2021: The Movie,” which pairs your recognizable songs against key moments and scenes from a movie, such as the opening credits, a fight scene, an intense montage, a face-off with a rival dance crew and others. 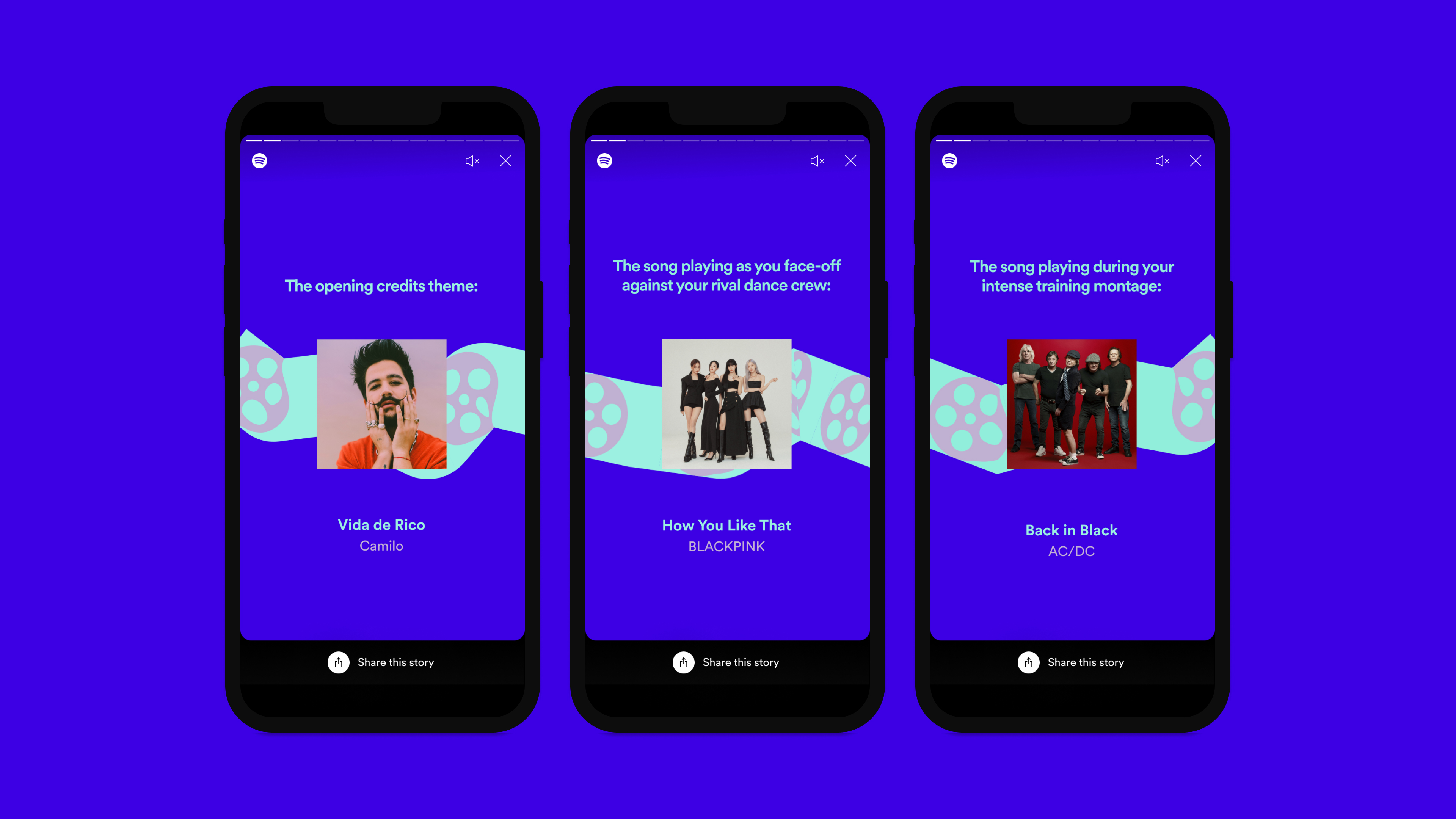 The company is also this year giving a nod to TikTok, which has been influencing Spotify’s top charts as the video app’s favorite memes get set to popular tunes, which in turn drive plays on music services. Wrapped includes references to various TikTok memes, like “Bones Day” or “Good Soup,” which have crossed the line from being a TikTok trend to being more a part of pop culture. And, for the first time, Spotify users can share their Wrapped cards to TikTok, in addition to Facebook, Instagram, Twitter and Snapchat. 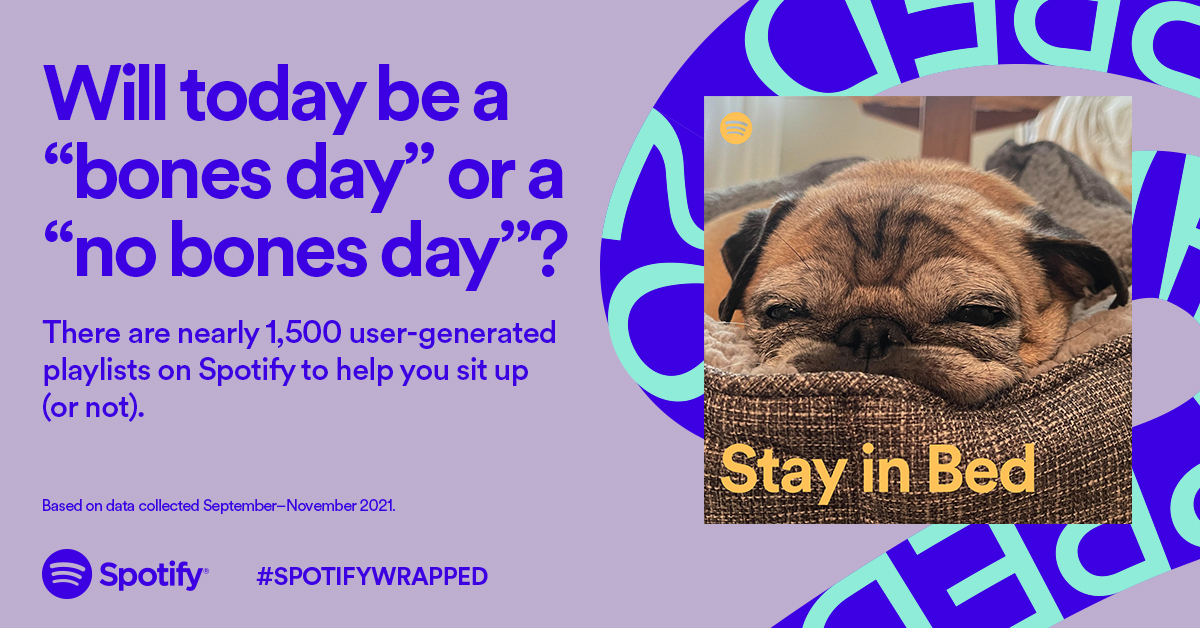 Another new feature is Wrapped Blend, which builds on Spotify’s existing playlist matching feature Blend, to allow users to compare their Wrapped with a friend’s to see how their taste matches up. They can then stream their Wrapped Blend or share the results on social media.

There’s also a new story called the Audio Aura, which provides a genreless perspective on your year. Your top two “moods,” based on your listening behavior, will be represented visually. 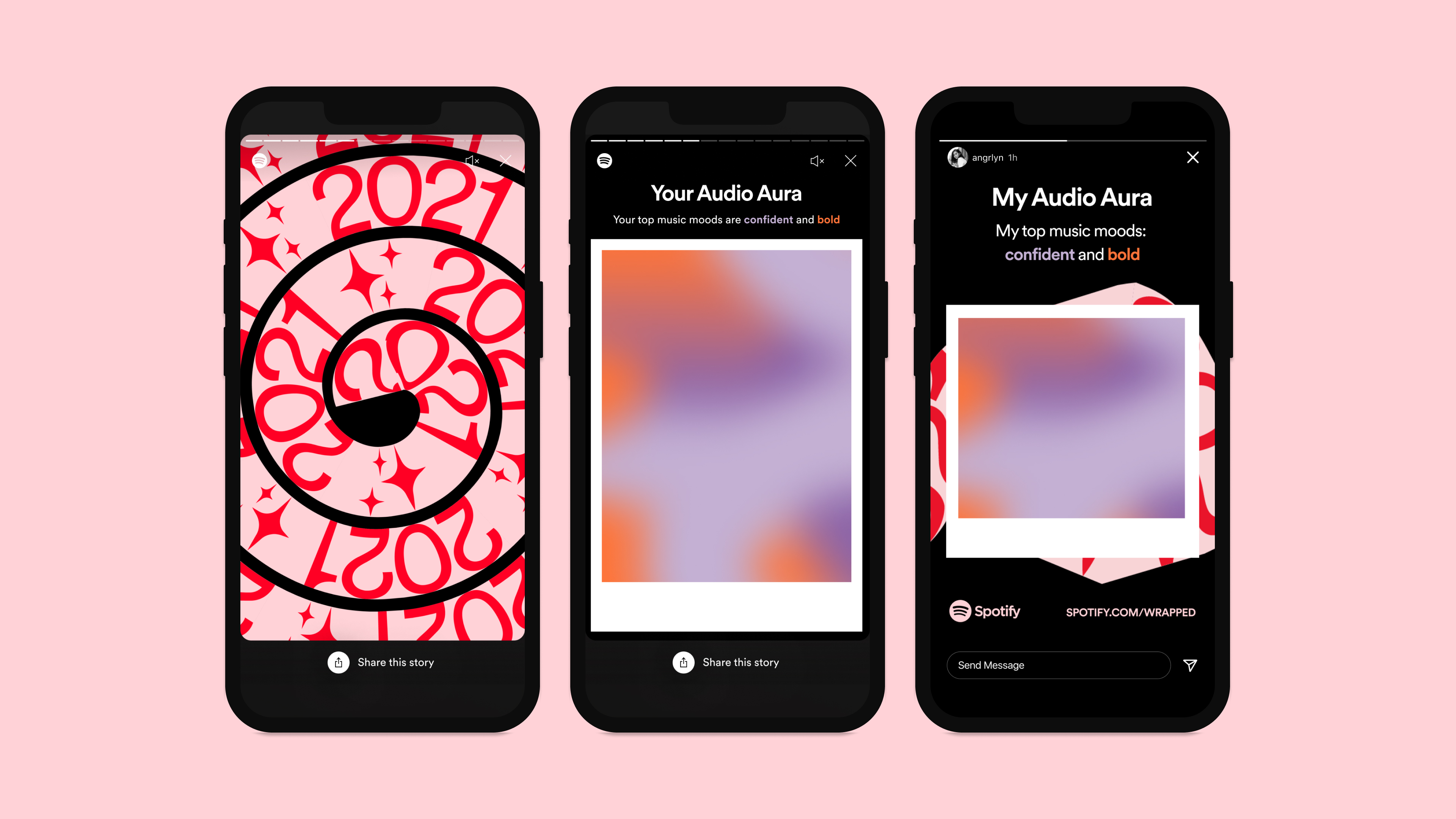 An in-app game, based on the popular game Two Truths and a Lie, is another new addition. Users can play and then share with friends several statements about their listening during the past year, and you’ll have to guess which ones are true. This interactive format could produce more social sharing and engagement, as it invites friends to play along too. 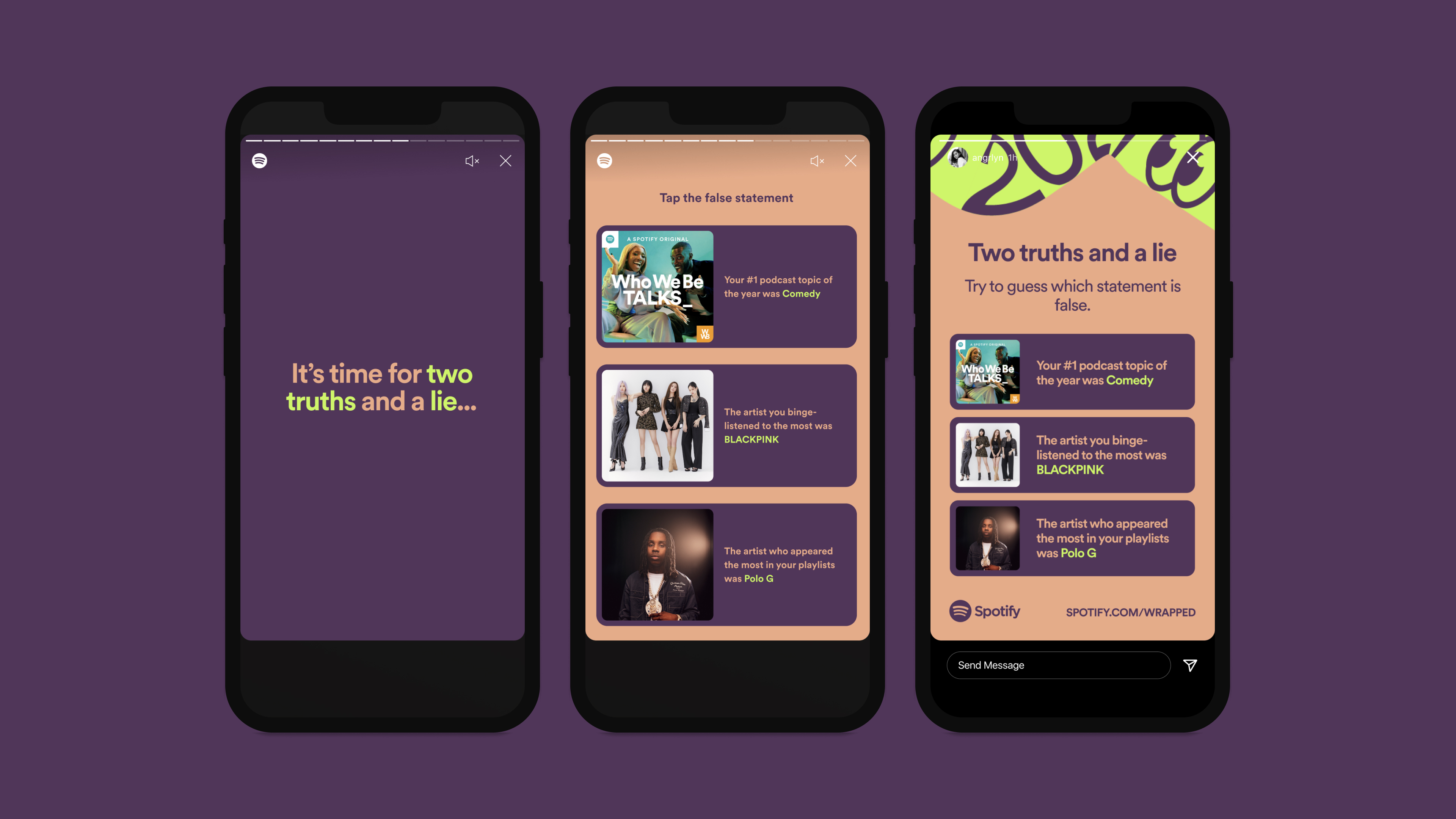 Another feature takes a cue from celeb social apps like Cameo to present users with videos from their favorite artists and creators. Spotify worked with over 170 artists and creators who filmed short videos thanking fans for including them in their year’s listening and having them on their Wrapped. If any of the participating artists or podcast hosts appear on your Wrapped, you’ll get to see the videos.

A smaller handful of podcasters and artists will be inviting some of their most passionate fans to join them for exclusive Q&A sessions in Spotify’s Greenroom live audio app, where they will talk about their own Wrapped results among other things. Participants include Ivy Le, JESSIA, Johnny Orlando, bbno$, DPR LIVE, Aurora + Sub Urban, Benito Skinner and Mary Beth Barone, and Spotify’s Xavier “X” Jernigan. These Greenroom rooms, which will be an hour long, will be password-protected and a link will be emailed only to top fans. However, two of Spotify’s own shows, “Most Necessary Live” on December 7 at 9 p.m. EST and “LOREM Life” on December 8 at 9 p.m. EST, will host public Wrapped-themed episodes. 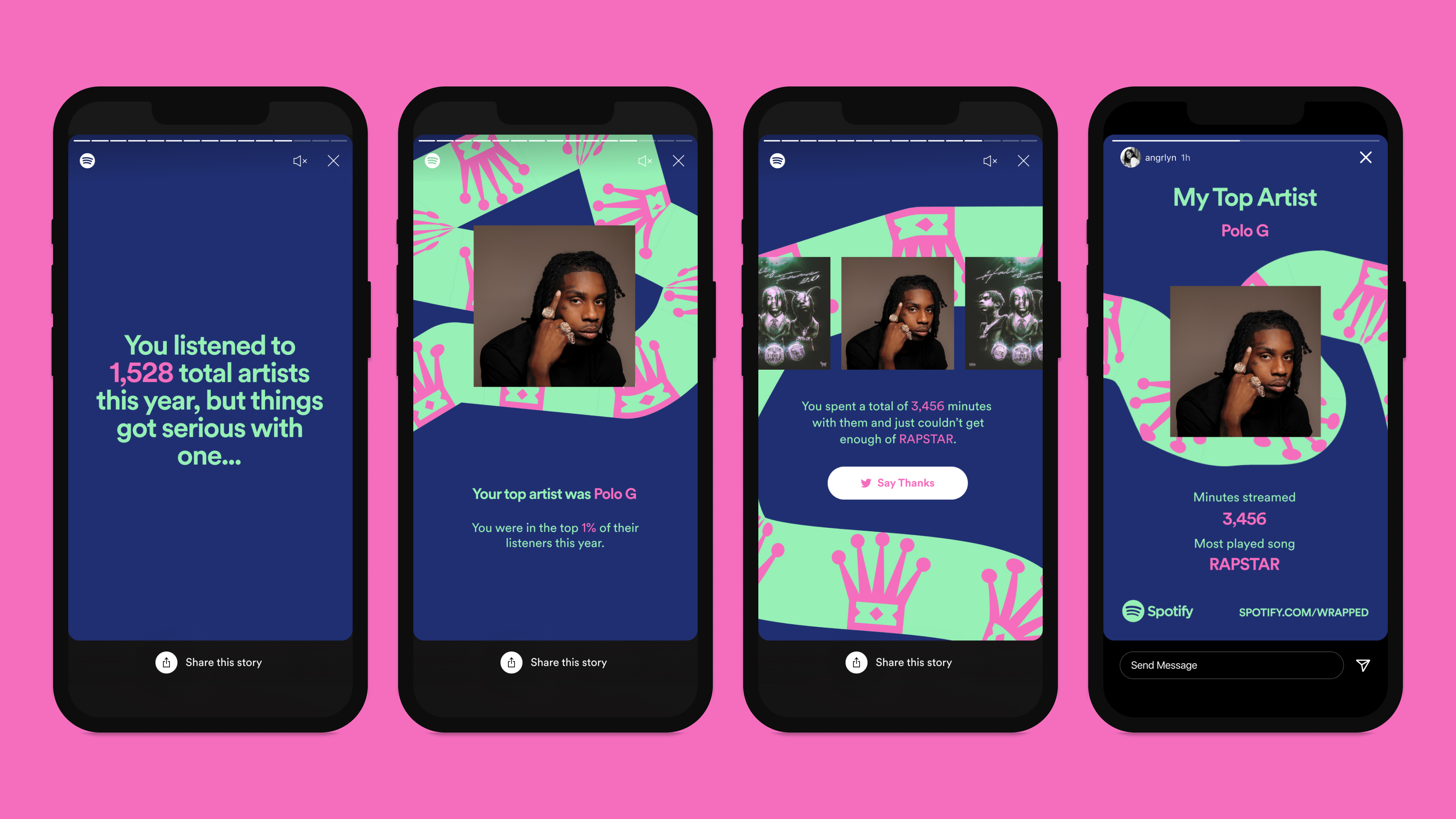 The official in-app Spotify Wrapped Hub will roll out starting today, featuring its typical lineup of year-end playlists and other features. This hub includes personalized playlists like Your Top Songs of 2021 and Your Artists Revealed. It will also include the data-driven playlists featuring music from the top artists globally and in users’ local markets, and the best new podcasts of 2021. 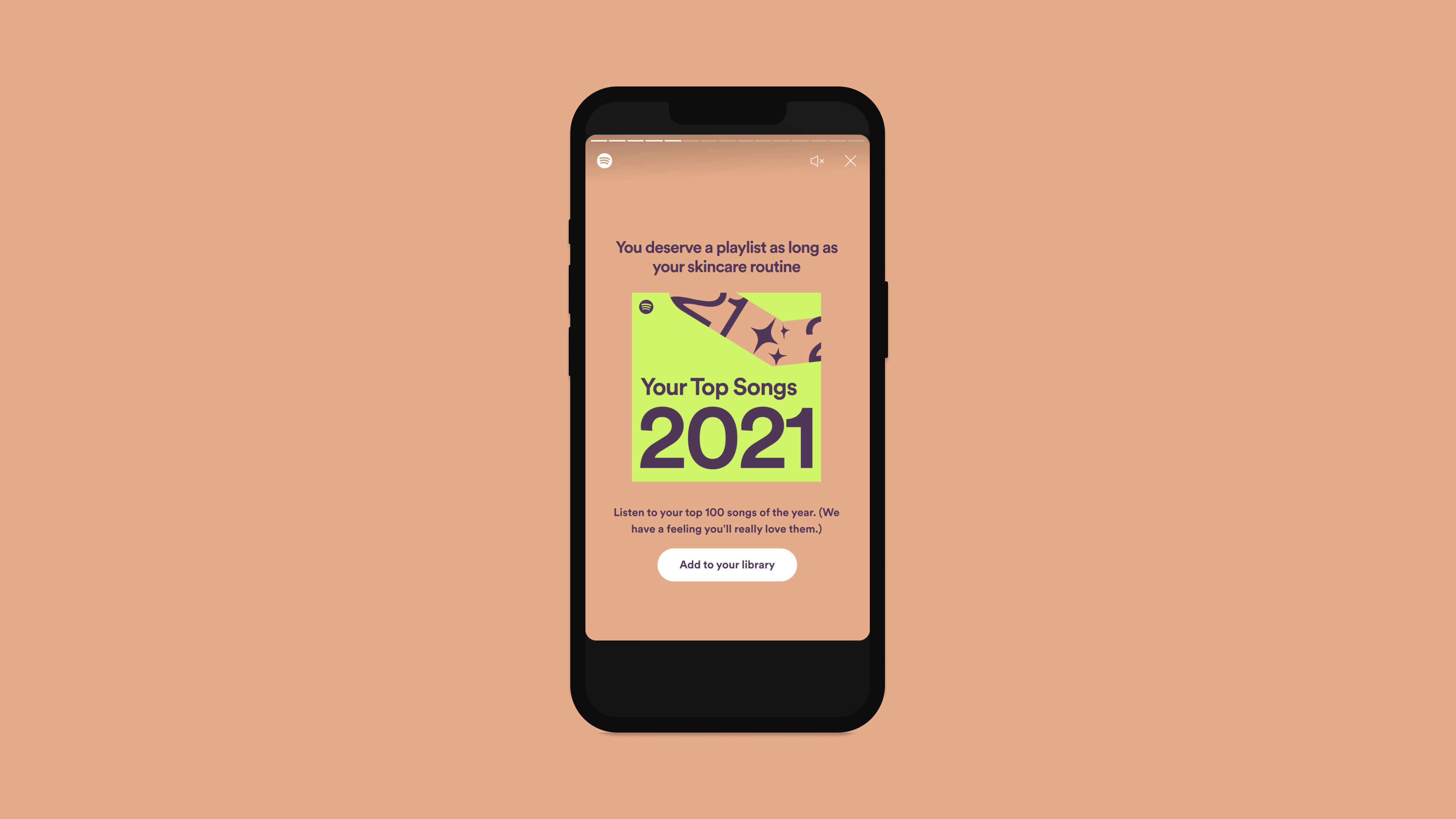 Creators and artists will also today gain access to their own microsites, where they can look back at their fans’ journeys and view other relevant data.

Through Spotify’s recent Shopify integration, fans who are included in an artists’ top fans list will be emailed a link to shop their merch over the next few weeks. 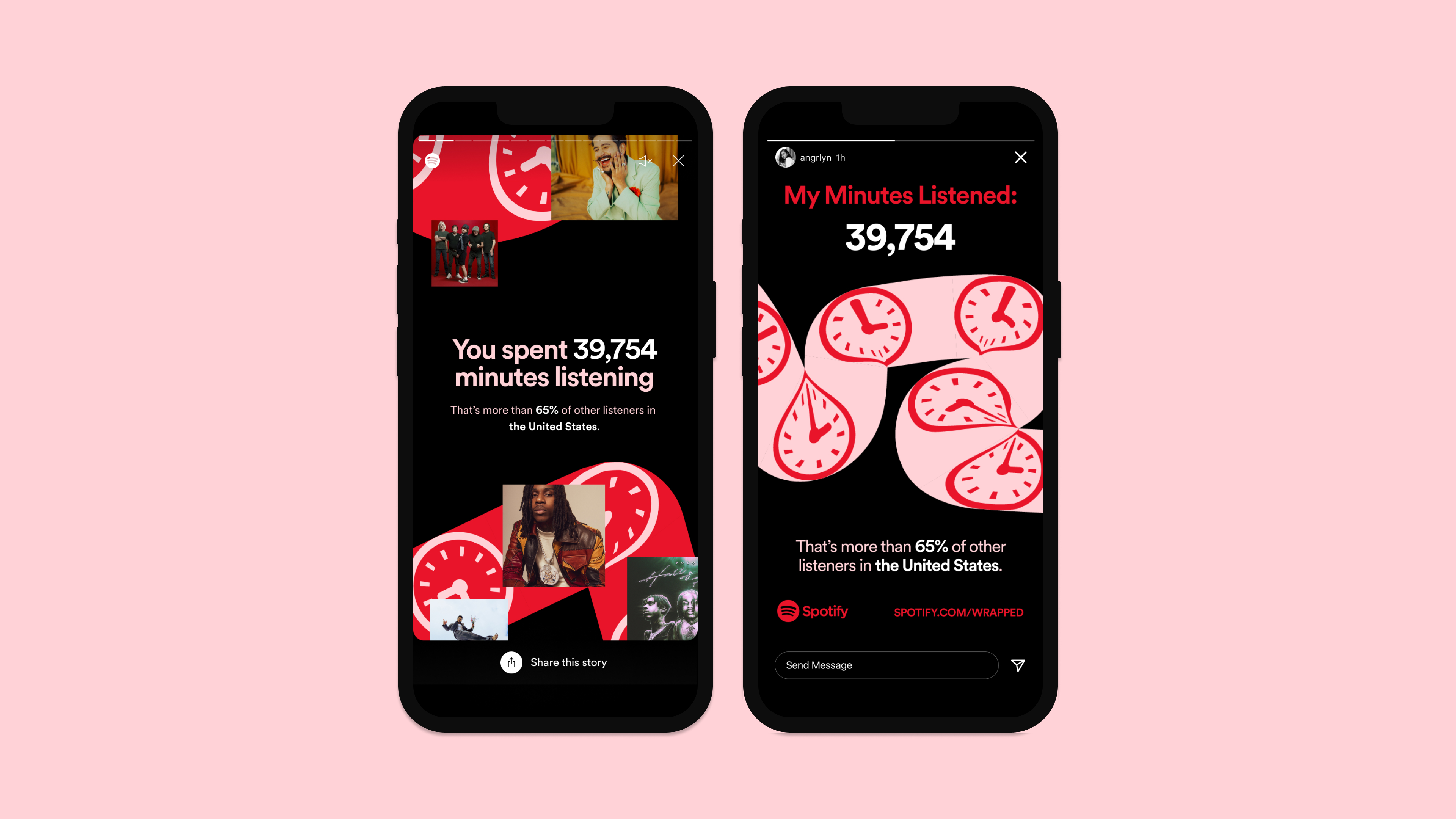 In addition to the launch of Wrapped, Spotify also revealed the top music and podcasts across its service in 2021. With more than 9.1 billion streams, Puerto Rican rapper Bad Bunny was the most streamed global artist of 2021, followed by Taylor Swift, BTS, Drake and Justin Bieber.

The most streamed song of 2021 was Olivia Rodrigo’s “drivers license” with more than 1.1 billion streams, followed by Lil Nas X’s “MONTERO (Call Me By Your Name),” “STAY (with Justin Bieber)” by The Kid LAROI, Olivia Rodrigo’s “good 4 u,” then Dua Lipa’s “Levitating (feat. DaBaby).”

The most popular podcasts were The Joe Rogan Experience, Call Her Daddy, Crime Junkie, TED Talks Daily and The Daily.