Hydrogen is at the center of many industrial processes and potentially part of major future energy ecosystems, but the process of isolating and storing it is wasteful and expensive. DiviGas, armed with a $3.6 million seed round, hopes to clean up the hydrogen production industry with a new tech that leapfrogs existing methods, potentially supercharging this piece of the new green economy.

While hydrogen itself is generally considered a clean and extremely useful basic element, its production is married to numerous dirty industrial processes. Oil refineries and plastic production, for instance, may give off various hydrocarbons and other mixed gases and chemicals, and to separate them requires further processing and emissions.

One cleaner and simpler option than chemical reactions uses membranes or filters, which essentially separate the H2 and CO2 gases from each other and from other substances in the input stream. But these filters cannot operate at high temperatures, output some gases at low pressures that must be re-pressurized at cost and rapidly degrade in the presence of common acidic gases.

Essentially the hydrogen diversion industry — and it’s big, by the way, billions big — is split between an expensive, emissions-heavy option and a cheap, limited option. After meeting in Singapore at one of SOSV’s HAX incubators, the founders of DiviGas plan to provide a third option that has none of the aforementioned weaknesses.

The company claims to have engineered a new “hollow fiber polymeric membrane” at the angstrom scale, which is to say one-tenth of a nanometer. It’s not like they designed a filter the size of an atom, but rather that the functional features of the material are at this scale, producing the kind of highly specialized effect desired — in this case, causing hydrogen and carbon dioxide gas to separate at slightly different pressures, allowing them to be diverted and isolated. 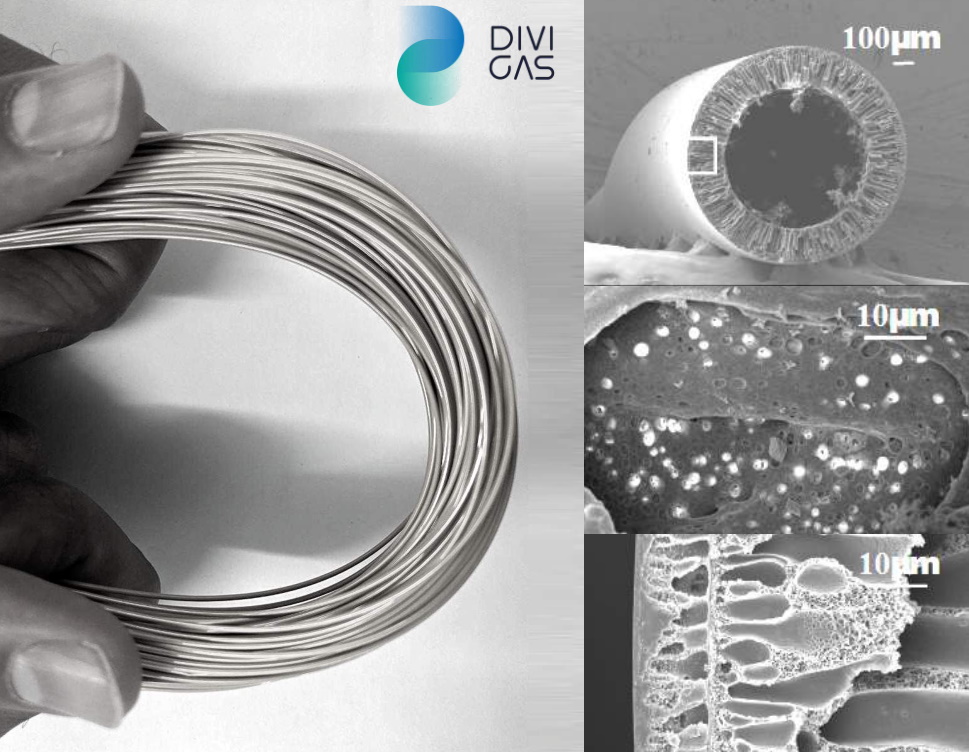 Huge numbers of fibers are bundled together into tubes through which the input gas is forced, with no chemical reactants required. Unlike other membranes, this new one can operate at high temperatures — up to 150 degrees C — and is resistant to common acidic compounds in the gas mix formed from sulfur and chlorine, which means it can handle more caustic and untreated input flows without degrading. And it does so while performing as well or better than the old membranes on basic scales of selectivity (affecting output purity) and permeance (which affects maximum operable pressure).

Because the method is the same in principle as existing membrane techniques, DiviGas’s tech can be substituted in with minimal fuss and modification. And although manufacturing the new fibers is not a trivial task, they aren’t particularly exotic and use many existing processes. As co-founder, CTO and creator of the new material Ali Naderi explained, it’s the result of various cutting-edge innovations but ultimately still easy to manufacture.

“To make it economically viable, we developed a dual-layer hollow fiber membrane to use the functional materials (i.e. expensive materials) as low as possible on the selective layer (i.e. outer layer) and a cheap/commercially available polymer in the mechanical support layer (i.e. inner layer),” he wrote in an email to TechCrunch. “This type of membrane can be fabricated commercially by using a customized spinning line that has the same price as a standard spinning line has.” 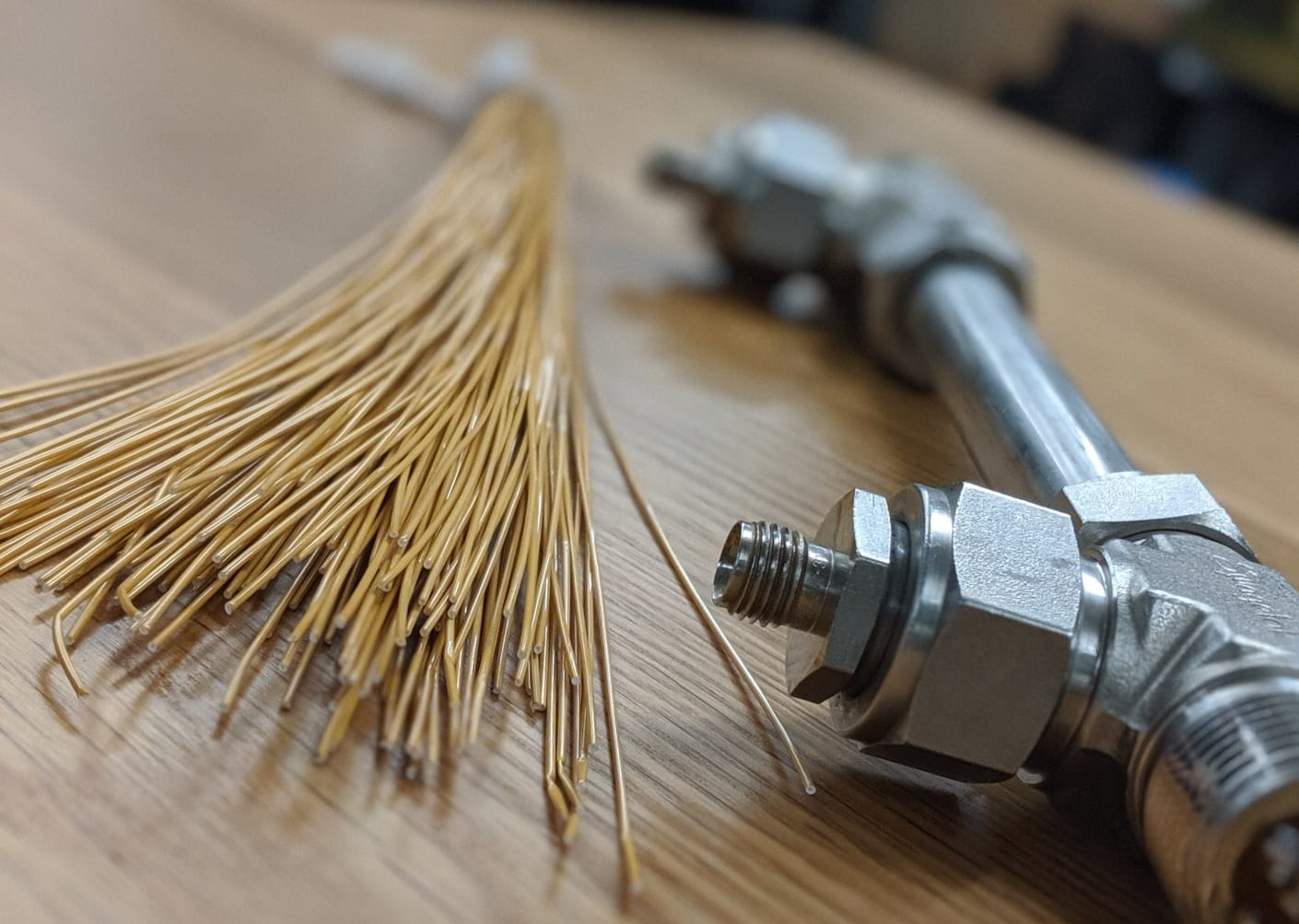 The prospect of simpler, cleaner hydrogen and CO2 production has been met with extreme enthusiasm by people in the industry, according to co-founder and CEO Andre Lorenceau.

“We’ve got clients banging down our door, asking us when we can give tens of millions of these things to them,” he said. “This round is us playing catch-up.”

The money is going toward building a pilot-scale plant in Melbourne that should be operational in March; currently it takes months to build a single unit (a usable bundle of fibers) for demonstrations, and a given client might want hundreds or thousands on a regular basis. Once the company is able to build them at a rate of around one a week, they can do larger demonstrations and small installations that will secure serious orders — and those proceeds will go toward building out out the full-scale manufacturing process.

“It’s two or three times more expensive right now, but they don’t care,” Lorenceau said (though the price will come down with volume, he added). “They say, ‘It’s a tech I know, a manufacturing process I know — if you can give it to us at that price it’s Gucci.’ And it’s a lot of clients, and we haven’t even been doing sales.”

The competitive landscape, he added, is conducive to quick action on their part, being full of slow movers and stalled startups.

“There are these giant lumbering corporations, they have a department for this and they do improve, but it’s old guard. Same reason why it isn’t the old PhDs of computer science who build the next generation of software tech — they’re not trying to build next-gen weird shit all the time,” he said. “The startups are also research PhD people who aren’t used to the high-speed VC thing. They have excellent research performance, but in terms of manufacturing, it costs a zillion bucks to make a square inch of the damn stuff. They say, ‘we’ll figure out the manufacturability…’ and they never do. So we can leapfrog them and the big corporations.”

The $3.6 million round was co-led by Energy Revolution Ventures and Mann + Hummel, a German industrial filter company clearly looking to get ahead of the game. Also participating in the round were Entrepreneur First, Albert Wenger (USV), SOSV/HAX, Amasia VC, Volta Energy Technologies and Climate Capital, along with several individual investors.