With restaurants having difficulty hiring workers, as is the environment today, one company is developing a hiring platform and restaurant worker network that aims to make that easier.

Seasoned announced Tuesday it received $18.7 million in a Series A round of funding to continue developing its mobile app employee networking and recruitment tools that are being used by more than 250,000 restaurant workers.

Some 800,000 jobs at eating and drinking places were still open as of October, according to the Bureau of Labor Statistics. Seasoned CEO Ware Sykes told TechCrunch that restaurant hiring was a pre-pandemic problem that was exacerbated over the past 18 months.

Sykes saw the limited ability for restaurants to advertise their job openings and created Seasoned to change that. There are two sides to the app: a free community for industry employees to review openings, schedule interviews and connect with peers, while a subscription-based hiring tool for restaurant managers works to lower onboarding costs and accelerate the timing between application and hire to within three hours.

“The purpose is to bring the service industry together — the worker and the restaurant — so that both can have success,” he added. “We have a social community where workers can find a job in 24 hours. Most other products are not built for the restaurant, but we have a mobile solution for both sides.” 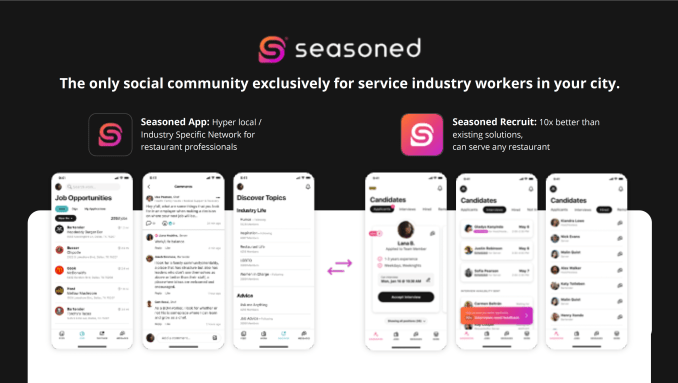 Remote-first Seasoned is the latest company receiving investment for hourly worker tools. For example, Fountain announced an $85 million Series C round last week for its applicant tracking system, while Workstream recently raised $48 million in Series B funding for its text-based recruitment approach. In addition, Bite Ninja secured some pre-seed and seed funding to continue developing its software that enables workers to pick up drive-thru shifts from home.

The two-sided app differentiates Seasoned from the others, Sykes said. He believes that unique business model was the driver for the company’s successful launch in Dallas in 2020, where in the first year it attracted over 300 brands operating 100,000 locations.

The latest funding round was led by Horizons Ventures and includes TPG Growth and existing investors. It follows a $12 million seed round raised in June to bring the company’s total funding to over $30 million since the company was founded a year ago.

Sykes intends to deploy the new capital into expanding into new markets. In addition to Dallas, it has already added Houston, Austin, Orlando and Miami and is expected to go national in the next year. He also intends to hire across the board in areas like product, technology, go-to-market and data science.

“This has become a movement,” he added. “A year ago, restaurants were listing wages and now they are offering sign-on bonuses and lifting wages across the board. The more data we get, the more we can see what kinds of benefits are attractive for employees.”