You may have visited some quick-service restaurants or other retailers in the past few months and noticed signs posted with shortened hours or not being open on a certain day.

Dubbed “The Great Resignation,” the mass exodus of hourly workers over the past 18 months has now resulted in a competition for talent. So much so that companies like Costco are raising their minimum wage to $17 per hour, while Starbucks said it is going up to $23 per hour.

“The world of hourly workers has never seen a more challenging environment like the one we are in now,” Fountain CEO Sean Behr told TechCrunch. “There was some hope amongst our prospective and current customers that once COVID-19 was over, whenever that was, that hiring would just become easy again. That is completely wrong.”

What’s made it so difficult? Well, aside from the pay, Behr explained a few trends that are happening. The first is that gone are the days of someone applying to a job in person: today, 80% of people apply via a mobile device, making it easier to apply for multiple jobs at the same time. Second, there are many more options for hourly workers than fast-food and retail: people can drive for ride-sharing or food delivery or work at the new Amazon warehouse a few miles away.

All of this together has created a competitive environment for hourly workers, many of whom have recognized that “earning $8 an hour to make burritos is not attractive anymore, nor is earning $13 an hour to risk their health,” he added.

Behr admits there is “no one silver solution,” which has resulted in this challenging situation that includes a majority of companies getting fewer candidates applying for jobs this year versus last year.

That’s where Fountain comes in. The remote-first company provides an applicant tracking system aimed at the 82 million people considered hourly workers in the U.S. 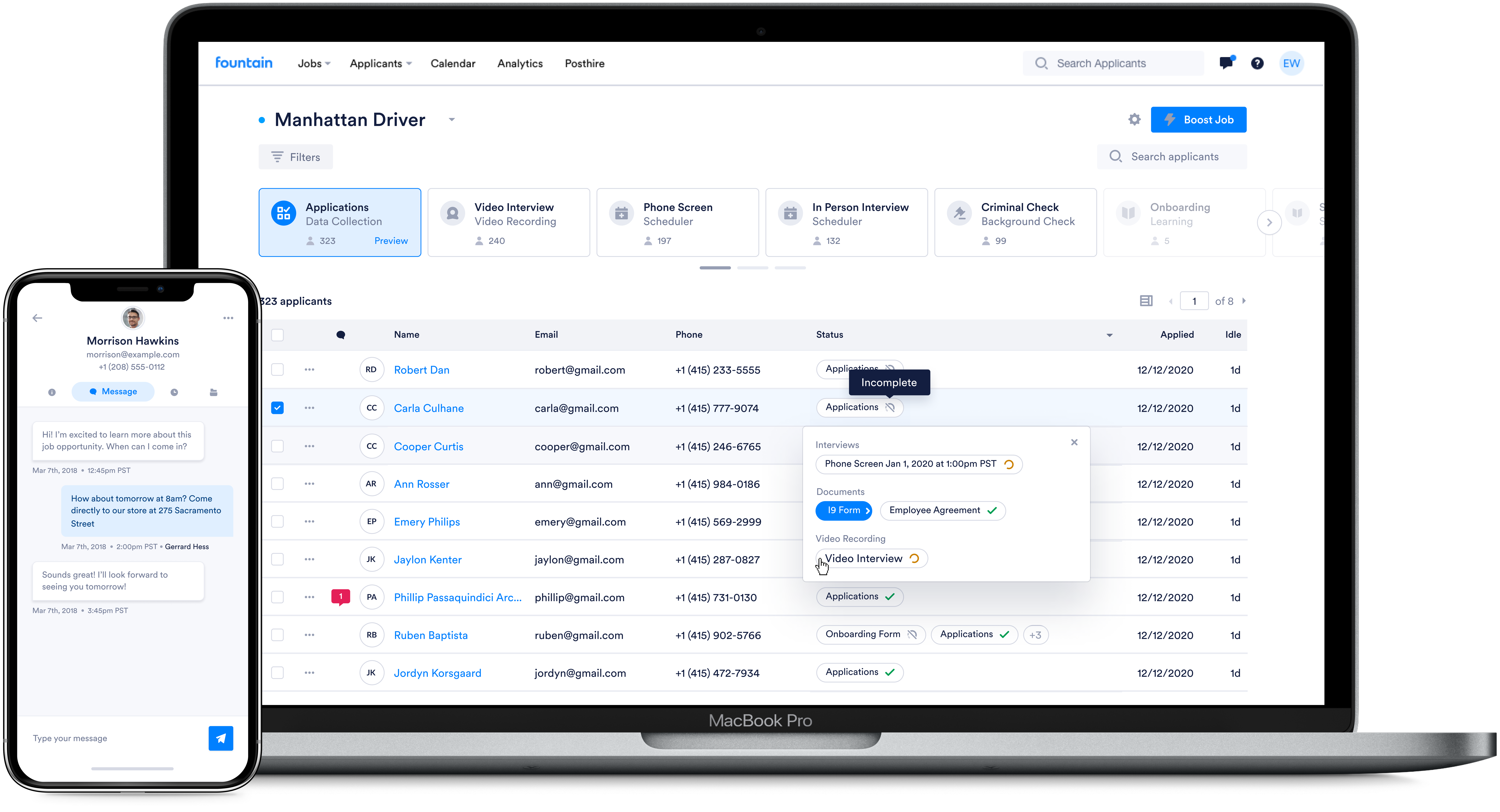 This kind of high-volume hiring is defined as needing to fill over 1,000 positions, or receiving that many applications per position, in a short period of time. Fountain’s technology also whittles down the median days to hire to 8.70 from the industry average of 36 days, Behr said.

Working with over 250 customers like Chipotle Mexican Grill and Liveops, Fountain has processed more than 16 million applicants in the past 12 months and helped customers hire more than 2 million so far in 2021.

That translated into revenue growth of 220% year over year in 2021 — and attention from some new investors, including SoftBank’s Vision Fund 2, which led Fountain’s new $85 million Series C round. For this round, the company received seven competitive offers from investors, but felt bringing SoftBank on was the “right partner for us as we look to expand globally,” Behr said.

Andrew Zloto, director at SoftBank Investment Advisers, said via email that what SoftBank liked about Fountain was catering to the needs of the modern workforce by helping employers find the right candidates quicker, and at the same time, helping employees find the job they want equally as quickly.

“Sourcing and hiring hourly workers have been transformed by the rise of the gig economy, which has shortened the process of hiring and onboarding from weeks to a few days,” Zloto added. “Fountain has built an essential toolkit for companies to keep up with and compete in this new hiring environment by simplifying, optimizing and automating the candidate journey to decrease time-to-hire. We believe the company’s partnerships with large employers like Chipotle and Liveops is a stamp of credibility of their innovative platform and ability to execute.”

Participation in the investment also came from new investors B Capital Group and Mirae Investment, and existing investors DCM, Origin Ventures, Commerce Ventures, Semper Virens and Uncork Capital. The latest funding round gives Fountain total investments to date of $119 million, including a $23 million Series B raised in 2019.

Behr intends to deploy the new funds into hiring — the company currently has seven salespeople globally and would like to also grow in engineering and marketing. Fountain also has plans for a big investment in the international market. It is already doing business in 77 countries, and Behr would like to do a push into Asia, Europe and the U.K.

Fountain is the latest company receiving investment for hourly worker tools. For example, Workstream recently raised $48 million in Series B funding for its text-based recruitment approach. In addition, Bite Ninja secured some pre-seed funding to continue developing its software that enables workers to pick up drive-thru shifts from home.

Behr says many of Fountain’s competitors are more focused on vertical niches like restaurants or truck drivers, and that its differentiation is that it takes a more holistic approach by matching the job characteristics to those looking for work.

“Rather than a complex one-sized-fits-all approach that airs on the side of the knowledge worker, we have pushed the industry to see that it doesn’t work for hourly workers,” he added. “We help you find who you are looking for — that person who is fine working in a cold warehouse or on that early morning shift.”