With its new M1 Pro and M1 Max chips, Apple declares all-out war on PCs, with a huge boost in performance, while sending battery consumption to the basement. The M1 Max is clearly gunning for the graphics professionals out there, but may also turn out to bring some more gaming capabilities to the Mac.

The M1 Max builds on the M1 Pro architecture, but adds a lot more oomph to the mix. The architecture features much higher bandwidth — up to 400 GB/sec of memory bandwidth, which works out to about six times faster than the already blazingly fast M1 chip — and twice as fast as the just-announced M1 Pro chip.

The new chip features 57 billion transistors and supports 64 GB of unified memory — that’s the shared memory between the GPU and CPU. It shares the same 10-core CPU architecture of the M1 Pro and bumps the GPU to 32 cores with a new media engine for hardware-accelerated video processing for H.264 and HEVC. It also features two parallel video encoding engines, which will delight video editors and others doing heavy graphics lifting.

The most impressive claim is that the M1 Max claims to keep the same power consumption curve per watt — in other words, more heavy graphics lifting without burning through your battery in minutes. 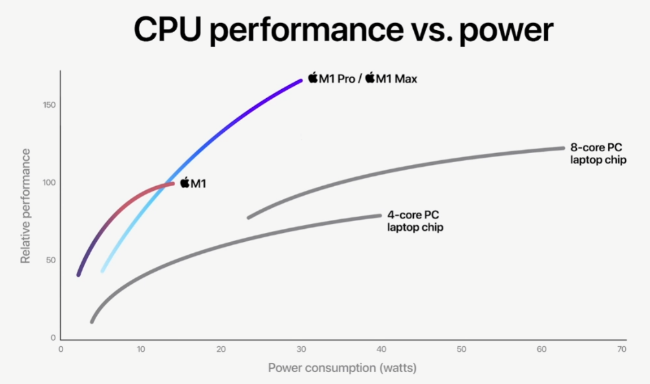 “Now let’s compare the M1 Max to the chip running in the fastest PC laptop we could find,” Apple joked in its event, comparing it to some of its rivals, flexing its power-supping superpowers.