Pinterest has announced co-founder Evan Sharp is exiting his full-time role with the company, where he’s served as chief design & creative officer, in order to join Jony Ive at his new creative collective, LoveFrom. After his last day today, October 14, 2021, Sharp will move into an advisory role with Pinterest which will focus on company strategy, product, design, brand and culture. He will also continue to serve on Pinterest’s board of directors.

Pinterest was founded in March 2010 by co-founders Sharp, Ben Silbermann and Paul Sciarra, and Pinterest today credits Sharp with leading the company during its evolution from a visual discovery engine to a global inspiration platform. While at Pinterest, Sharp oversaw product strategy and user experience, including architecting its Shopping and Creator platforms. 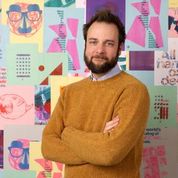 “Reflecting back over the last decade, I feel filled with gratitude and pride at what our team and our community have achieved. Together we’ve built Pinterest: a technology company and platform that is a positive ‘home of inspiration’ for hundreds of millions of people around the world,” said Sharp, in a statement. “After long reflection on how I can best grow my ability to serve, I’ve decided to shift my focus and join Jony Ive and the remarkable creative collective he’s assembled at LoveFrom. I look forward to continuing to partner with Ben and the team at Pinterest on the company’s ambitious evolution into the global platform where creators and merchants inspire people to create a life they love,” he added.

“Evan’s unique talent, vision and passion have been instrumental in building Pinterest into a home of inspiration for hundreds of millions of people around the world,” said Pinterest co-founder and CEO Ben Silbermann, also in a statement. “I’m thankful for his partnership, leadership and friendship over the past 10 years and grateful that he will continue to support Pinterest as a Board member and in his new role as an advisor.”

Pinterest tells us Sharp’s role was a unique co-founding role, so it will not be replaced. He also did not have a current team officially reporting to him, so there are no changes in the reporting structure. Instead, the design team will continue to operate under Head of Product Naveen Gavini, and with leadership from Head of Design Lindsay Mindler.

There’s no word yet on what Sharp’s role will be at LoveFrom, but several ex-Apple employees have already joined Ive at the firm, including Wan Si, Eugene Whang, Chris Wilson and Patch Kessler. (Jeff Tiller, however, left this summer.)

In a memo sent to employees, Silbermann said the following:

I write to share some bittersweet news: Evan will be stepping away from his day-to-day work at Pinterest. He will be starting an exciting new adventure outside the company (which I’ll let him tell you about!). Here at Pinterest, he will be transitioning into an advisory role and continue serving as a board member. So the good news is that he’s not going far away.

Still, this is the end of a chapter. In processing it, I’ve spent a lot of time thinking about the beginning. Evan and I met in 2009 in New York City. We hit it off immediately. We talked about our (nerdy) interests, our families, and our hopes for the future. He was clearly a builder at heart, which was fitting because he was in architecture school. I remember thinking: Wow, I want to work with this guy.

Eventually, we began talking about building a tool to help you collect the things you love on the internet. That idea turned into a product, which we later named Pinterest. And so began the start of an amazing, decade-long journey together, and with all of you.

Evan’s been so essential to Pinterest’s growth. Sometimes the tasks were small—he once hurt his wrist putting together IKEA desks at our first office. Often, his contributions were transformational. Countless times, he’s taken a whiteboard of ideas, and translated them into a meaningful experience in the product and company.

But what I’ve always loved is not just what he’s built, but how he’s built—with empathy, care and concern for others. He’s never been afraid to speak up for those values in a meeting. No matter how big Pinterest got, that never changed.

For me personally, it’s hard to capture what Evan’s partnership has meant to me. When I reflect on our years building together, I don’t think about a business plan or an OKR. Instead, I think about all those long days, late nights and many phone calls—nurturing a shared dream together; celebrating incredible highs and encouraging each other through tough lows; being at each other’s weddings and meeting each other’s kids for the first time. He’s not only been a great co-founder, but a great friend.

While Evan won’t be a daily presence at Pinterest anymore, more than anything, I’m grateful—for the person he is, for the work he’s done, and for the counsel he’ll continue providing in his new role.

We’re hosting Q&A tomorrow and I hope to see you all there so we can say with one collective voice: Thanks, Evan!

Sharp, in a note to staff, said the decision was a tough one.

When I think back over the past 11 years, I feel filled with gratitude and pride for what our team—and our community—have built together.

When we started Pinterest, we never dreamed that hundreds of millions of people around the world would be using it every month to get inspiration for all facets of their lives. At least I didn’t!

As proud as I am of what we’ve built, how we build it—the values that each of us has woven into the way we do business—makes me even prouder.

We are not perfect, but we care. We work hard to Put Pinners First.

As you might imagine, this is a tough decision for me. What job will ever be able to compete with leading Pinterest? None.

But when I think about how to create a life that I love, one thing is clear to me: I really, really want to grow as a designer and product builder. That’s why I’ve made the decision to work with the designer Jony Ive at LoveFrom. This chance for me to learn alongside the very best at their craft is a tremendous opportunity.

And yet: I’m very excited about our vision and strategy here at Pinterest over the next few years. It’s going to be the most ambitious, challenging and rewarding few years in our history.

So while I will no longer be working on Pinterest every day, in my current role, I’m really looking forward to continuing to contribute to our company strategy, our product, our brand and our culture—and, I hope, to bring back new learnings as well.

I want to thank each person reading this for choosing to make our mission and our company the place you invest your time, energy and creativity.

The best part of this past decade for me has been getting to work alongside so many extraordinary people: extraordinary in their talent, their hard work and their intellect, and also in their character, their values and their heart.

Ben: You especially. Your integrity, your resilience, your unbelievable work ethic, and your childlike love of apps and the internet has made you the very best partner—and friend—I could ever have asked for.

You know the best thing about founding a company? You get to build your dream place to work.

Thank you all for helping make my dream come true.