Coinbase is readying the launch of an NFT marketplace that will compete with existing major players in the space, like OpenSea, debuting a user waitlist for the desktop product that it hopes to launch by the end of the year.

Coinbase has limited details to share on its upcoming platform, but notes in a blog post that they hope to more deeply integrate social features into the platform. “Coinbase NFT will make minting, purchasing, showcasing, and discovering NFTs easier than ever. We’re making NFTs more accessible by building intuitive interfaces that put the complexity behind the scenes. We’re adding social features that open new avenues for conversation & discovery.”

Even as Bitcoin inches closer to the all-time high it was flirting with when the Coinbase direct listing occurred, Coinbase’s stock has still failed to keep pace with the rebounding growth of some of the most popular coins in the space, now down some 27% since its direct listing in April. The exchange simultaneously has regulators breathing down their neck, with the SEC recently threatening to sue the company over their Lend yields product, the launch of which they later canceled. Coinbase is also dealing with a crowded competitive landscape stateside for buying and selling crypto as exchanges like Robinhood build out deeper support for crypto. 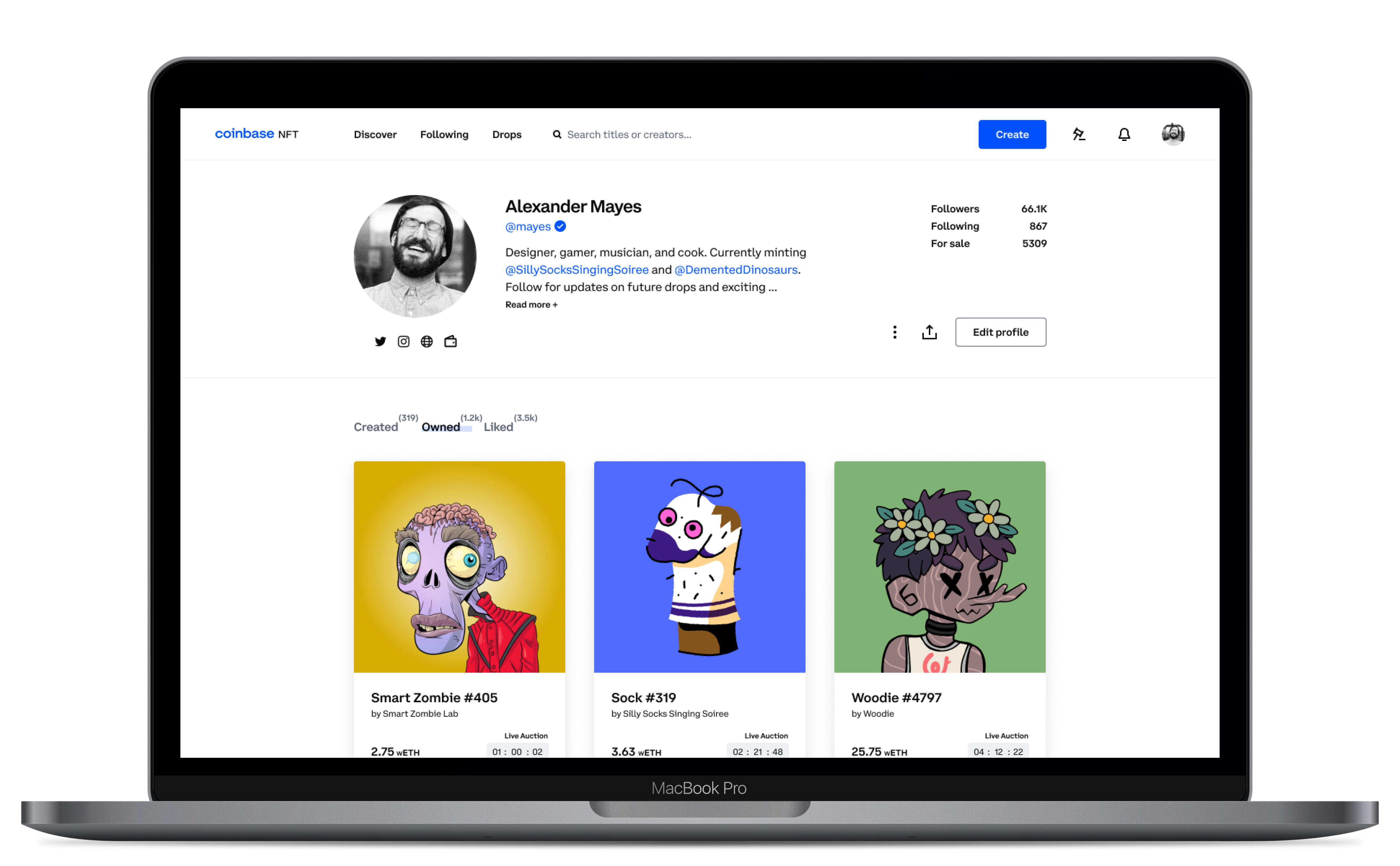 Image Credits: CoinbaseCoinbase NFT could open up a major revenue source to the now-public company, assuming that NFTs continue to court investor interest from those looking for high-priced digital collectibles and art. After spiking earlier this year and again in August, the NFT market is showing more resiliency than many expected but is still seeing even much broader swings than already volatile cryptocurrency prices. OpenSea saw a record $3.4 billion in transaction volume in August.

The company is launching with support for the Ethereum blockchain, which isn’t a very surprising place to start an NFT rollout, but Coinbase notably won’t be integrating with any Layer-2 scaling networks at launch, meaning Coinbase NFT users will still potentially be paying hefty gas fees and dealing with many of the scalability issues of mainnet Ethereum at launch. Coinbase says in a blog post that it will eventually offer “multi-chain” support on Coinbase NFT, but is launching with support for ERC-721 and ERC-1155 Ethereum standards. Competitor OpenSea recently launched support for significantly lower-priced transactions leveraging the Polygon network.

OpenSea is the dominant power in the space, but is far from the only player that Coinbase will have to compete with. Rivals like Binance and FTX have also announced recent entries into the NFT marketplace ecosystem. While many crypto investors see NFTs as just scratching the surface of their potential, Coinbase is launching much later than some of its soon-to-be competitors. Nevertheless, given Coinbase’s name recognition in the consumer crypto world, this is likely going to be a big launch.