Let’s not discuss the Mustang Mach-E’s name. Not the Mach-E portion, the other part — the lineage of the pony car slapped onto an electric SUV. Those arguments are over. People have picked sides. The question of whether the Mach-E is a Mustang is irrelevant. A far more pressing query is upon us: Is the Mach-E GT worthy of the GT badge?

Without reservation, both the Mach-E GT (Starting at $59,900) and Mach-E GT Performance Edition (starting at $64,900) are worthy of Ford’s Grand Touring badging. This is accomplished thanks to significant power boosts on both trim levels versus the regular Mach-E, a new track mode and, in the case of the Performance Edition, an upgraded suspension system. 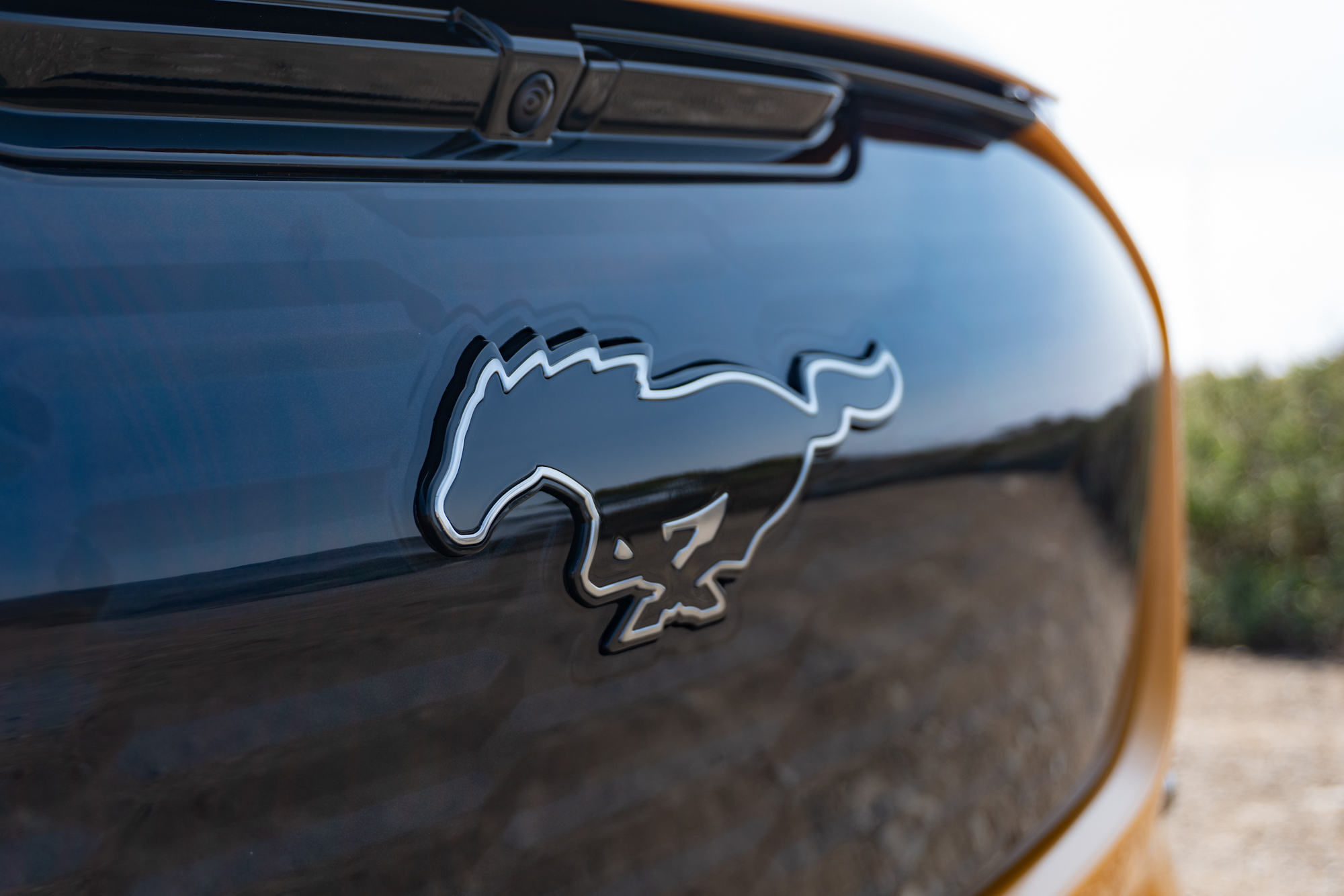 The base-level Mach-E is already quick thanks to its EV powertrain. For the GT and GT Performance Edition, the acceleration and throttle response have been increased to deliver impressive bursts of speed. The GT ships with 480 horsepower and 600 pound-feet of torque and hits 60 miles-per-hour from a dead stop in 3.8 seconds. To increase speed, Ford upgraded the front motor and, while the battery pack is the same, at 88 kWh, the wiring and tuning of the pack have been enhanced.

For those with larger budgets and a desire to hit 60 even quicker, the GT Performance Edition sports 480 horsepower and 634 pound-feet of torque for a zero to 60 run of 3.5 seconds. Like the GT, it’s also received a battery wiring and tuning upgrade and an enhanced front motor.

Both vehicles ship with all-wheel drive (AWD) standard, which helps deliver all the EV torque to the road, but that power isn’t as well maintained as it should be. During multiple launches, the front wheels of both vehicles slipped either right at launch or before hitting 30 miles per hour. I also experienced momentary torque steer on the GT Performance Edition when I stomped on the accelerator from a dead stop.

Those tiny peel-outs are expected on the GT. It’s rolling with the same multilink suspension found in the regular Mach-E. The GT Performance Edition, though, is the first Ford EV to be outfitted with a MagneRide suspension system. While it’s great at reducing body roll in the corners, it seems to need a bit more tweaking to keep the back end from diving during takeoffs to reduce wheel slippage in the front. Driving both vehicles on the same day, I was able to see the benefits of MagneRide both on the freeway and during spirited backroad driving. While the GT offered up suitable handling around corners, it displayed far more body roll than the more expensive GT Performance Edition. This was especially noticeable in hairpin turns, where the Performance Edition held its own while I found the GT diving to the outside.

Speaking of cornering, while both vehicles are AWD, they both displayed slight understeer, which isn’t much of a surprise. On the second day of driving though, Ford placed me on an autocross track with the GT Performance Edition, and with traction control turned off, the vehicle felt more neutral around corners and did lend itself to some slight oversteer when pushed.

While driving the GT, I had my first encounter with Ford’s hands-free driver-assistance system, BlueCruise. Like Super Cruise from GM, the Level 2 system allows the driver to remove their hands from the wheel under certain circumstances. Like Super Cruise, the system is geofenced to pre-mapped divided highways and uses a driver monitoring system to make sure the person behind the wheel is paying attention to the road. Ford says that BlueCruise is available on both vehicles as part of the optional $1,900 Ford Co-Pilot360 Active 2.0 Package.

During my tests, I found the system to be slightly less robust than GM’s offering, with a bit more ping-ponging of the vehicle in the lane after tight corners. In one instance, I took over the steering duties when I felt the vehicle hadn’t turned sharp enough and felt that it would glide into the next lane. On a majority of corners and when traveling in a straight line, it handled changing traffic conditions and cut-ins proficiently. If I spent too much time looking at the infotainment screen rather than the road ahead I was appropriately scolded by the system.

I do wish the audible warnings were a bit louder and that Ford added a light bar or warning lights to the vehicle’s steering wheel in addition to the dash cluster to warn when I need to pay attention or when BlueCruise’s hands-free feature was about to disengage. BMW, GM and Mercedes use on-wheel indicators; it’s a shame that Ford has decided not to follow their leads.

While the interior is the same at the regular Mach-E, the materials have received an upgrade with new seats. In the GT, sport-style seats add a bit more side bolstering to keep drivers in their seats while cornering. The new seats are comfortable without being overbearingly sporting.

The seats in the GT Performance Edition are another issue. The Performance seats have an additional element at the shoulder line that was uncomfortable no matter how I situated my 6-foot, 3-inch frame. Shorter drivers might be fine with it, but I couldn’t get comfortable and was happy when I switched over the GT.

Like the regular Mach-E, the two GTs are home to Ford’s 15.5-inch portrait display with Sync 4A. The infotainment system displayed only a slight bit of latency and its large surface area reminds you that this is the future of vehicles. Most features were only a few taps away and the large volume knob near the bottom of the display is still one of my favorite features on the vehicle.

Climate controls are handled by the infotainment system, which I’m not a fan of, but adjusting the temperature was relatively painless since the controls are always available at the bottom of the screen.

The rear seats in both vehicles are still comfortable, even for taller adults, and, along with a cavernous frunk, the Mach-E’s 29.7 cubic feet of cargo space behind the rear seats is enough to haul four to five pieces of medium-sized luggage.

All that fun of the GT does come at a price beyond the rather steep cost differential over the $42,895 base model Mach-E.

For all the extra power, you lose range. The extended range Mach-E (starting at $50,775) has 306 miles of range. The Mach-E GT tops out at 270 miles, while the GT Performance Edition needs to be hooked up to the power grid after 260 miles.

Fortunately, both support charging at up to 150 kW at DC fast-charging stations; better yet, they feature plug and charge, which means if you have an account set up with a charging station like Electrify America, you just plug in the vehicle and it starts transferring that sweet electricity to the vehicle’s battery without using an app or credit card. It just recognizes the vehicle.

The Mach-E GT Performance Edition makes a compelling case for dropping an extra $5,000 for slightly more power but better suspension. The reality is, most of these will never see a track or use Ford’s Mach-E track mode Unbridled Extend feature. It’s more likely that these will be daily drivers that see more traffic than track time. If that’s the case, the $1,900 driver-assistance package with hands-free BlueCruise is likely money better spent.

Either choice someone makes, they’ll be get a driving experience from an EV that we might not agree is a Mustang, but we can definitely concede is deserving of the GT badge.