Facebook is expanding its investment in audio initiatives with the launch of a new “Audio” destination in its mobile app in the U.S., where users will be able to discover in one place all the audio formats Facebook now hosts, including podcasts, Live Audio Rooms and short-form audio. The company says it’s also making its Clubhouse rival, Live Audio Rooms, more broadly available to global users, and is beginning to roll out a new product called Soundbites, a sort of TikTok for audio offering short audio clips.

An early version of the new Audio destination has been in the process of rolling out to all Facebook users (18 and up) in the U.S. across both iOS and Android, but is being officially announced now. It can be accessed through the top navigation within Watch, Facebook’s video hub — a design choice that feels a little incongruous, given that audio content is meant to be listened to, not “watched.”

The company says the new destination will help creators to have their shows found, while Facebook users will be able to find audio content from favorite creators, discover new ones and access content they had saved for later. At launch, the Audio section will feature the content from the creators you’re already following, and will include a set of personalized recommendations as well as suggestions of other audio that’s popular across Facebook.

The destination will become more personalized to your own tastes and interests over time, as you engage with the audio content and follow more creators, Facebook notes.

Timed with this launch, Facebook offered an update on the work it’s been doing to expand access to more of its audio products.

This spring, Facebook had introduced a suite of new audio features, including its Clubhouse competitor called Live Audio Rooms, as well as the short-form audio product called Soundbites, plus support for podcasts. With Spotify, it also partnered on a new miniplayer that streams from the music service to users on Facebook.

Live Audio Rooms officially launched in June to U.S. public figures in good standing with Facebook and to select Facebook Groups. Since then, Facebook said the feature has been found to work as a lightweight means of connection and conversation across communities, where it’s been adopted by creators including Lil Huddy, Noah and Miley Cyrus, quarterback Russell Wilson, singer Becky G, comedian Sherry Cola, Mereba Music and others. 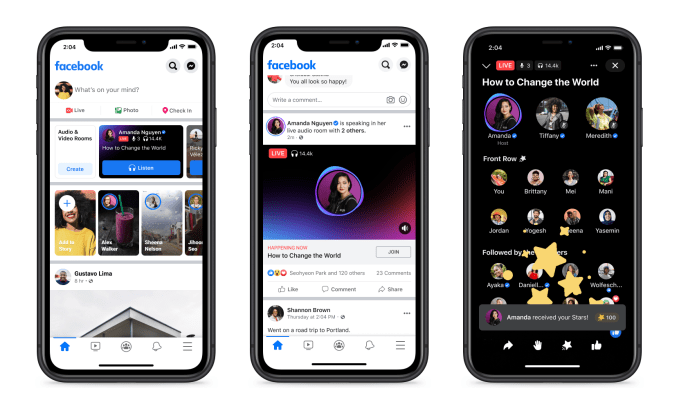 Now, Facebook says Live Audio Rooms are rolling out to more public figures and creators outside the U.S. as well as non-U.S.-based Facebook Groups. In addition to iOS, the feature has launched on Android, and the ability to listen to Live Audio has arrived on desktop, which makes it more accessible as it expands to other markets.

Meanwhile, the short-form Soundbites product has been in testing since June with a group of emerging creators and others, including comedian and best-selling author Josh Sundquist; actress, disability advocate and lifestyle influencer Lolo Spencer; and digital creator Molly Burke. This test recently expanded to include more creators, and now, Facebook says Soundbites will roll out to more people in the U.S. in the coming weeks.

The company also noted it’s been working on support for podcasts following its audio announcements earlier this year. This summer, it made podcasts available to U.S. users. More recently, it’s rolled out the ability to share short podcast clips in News Feed and added support captions on Android (with iOS still to come). Podcasters were additionally given the ability to add their RSS feeds to their Facebook Page on desktop and mobile. However, podcast listening remains still U.S.-only for the time being.

Facebook says as it’s been expanding its audio experiences, it’s been working on tools that would help to identify and act upon content that violates its Community Standards. This includes tools to automatically identify harmful content on Facebook. Plus, Facebook says it’s adapting both its technology and processes to detect and moderate violating audio content, as it learns more.

This new follows a tough week for Facebook, which not only included one of its longest outages to date, but also saw a whistleblower testifying before the U.S. Senate about the harms enabled by Facebook’s platform, including its engagement-based algorithms, inability to fight misinformation and corporate decision making that put profits above people. Facebook’s staff are now divided over the whistleblower’s testimony, The New York Times reported. With Facebook now venturing deeper into audio and live audio — a difficult area to address from a moderation standpoint — Facebook could become a platform for more misinformation to spread if it’s not able to develop the necessary technology that would make audio a safe environment.