Earlier this year, Spotify introduced its new audio advertising marketplace, the Spotify Audience Network, which allows advertisers to reach audiences across Spotify’s ad-supported music and original and exclusive podcast programs, as well as third-party podcasts from Megaphone publishers, all in one place. Today, the company is launching access to the Spotify Audience Network to creators who use its Anchor podcast publishing tool in the U.S.

Support for Anchor had been previously announced when Spotify first unveiled its plans for the Spotify Audience Network back in February during its “Stream On” live event. The company described the new platform as a potential game changer for the world of podcast monetization, as it would give advertisers tools to reach the Spotify audience of hundreds of millions.

The news had shortly followed an investigative report by The Verge, which found that Anchor was struggling to find sponsors for smaller podcasters, as it had promised to do. Instead, Spotify itself was found to be the main sponsor for Anchor advertising to date. The debut of the Spotify Audience Network, however, put that report into perspective. It seemed that Spotify may have chosen to prioritize the building out of this larger ad marketplace, rather than working on sponsor outreach for smaller shows.

The Spotify Audience Network has already launched in the U.S., U.K., Canada and Australia, where it now powers advertising across Spotify’s shows and other third-party podcasts, like those from The Wall Street Journal and ViacomCBS. Though the company today declined to say how many total podcasts are participating in the marketplace, it said the total has risen by more than 50% since launch, and about 4x more advertisers are now running ads on the network. Many are first-time podcast advertisers, like Saks Fifth Avenue. 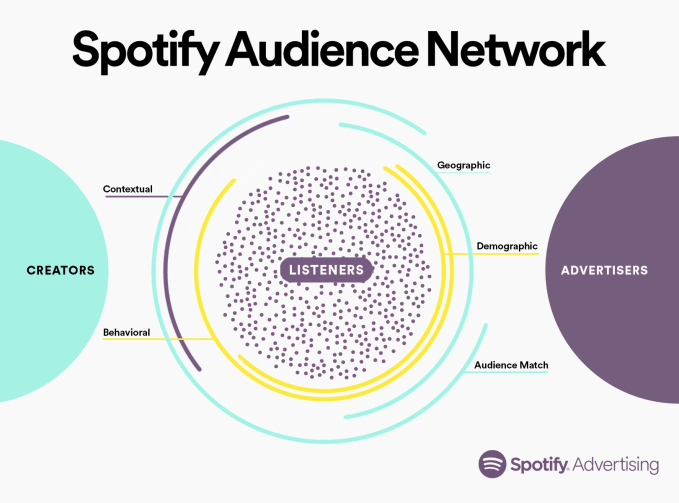 With the additional support for Anchor, Spotify notes advertisers will be able to reach a large swath of Spotify’s podcast catalog as Anchor powers 70% of the podcasts on Spotify. It will also enable advertisers to reach popular shows like “Alyssa Milano: Sorry Not Sorry,” “How Long Gone” and “Office Hours live with Tim Heidecker,” the company noted.

Instead of taking a percentage revenue share from advertiser payments, Anchor creators who are part of the Spotify Audience Network will receive a flat rate RPM (revenue per thousand listeners), the company told TechCrunch. But this detail isn’t mentioned on the website which presents the ad options to Anchor creators. Spotify says the rate will be visible to participating creators in the money tab of their Anchor dashboard, and at this time the rate is a $13 RPM.

Spotify said the expansion is only one way it’s working to make it easier for advertisers to reach the podcast listener base on its platform.

The company is also soon launching support for podcast ad buying in Spotify Ad Studio, its self-serve channel now live in 26 global markets. Before, advertisers would have needed a direct relationship with the Spotify team and a sizable budget to advertise on its podcast network. But the Ad Studio’s launch of podcast ad buying will enable smaller advertisers, like universities, independent artists, app developers and others, to now buy ads on podcasts, Spotify says. This launch will take place in the U.S. before rolling out to more markets.

An early beta tester of this functionality included Two Men and a Truck, which used the Spotify Ad Studio to test advertising in podcasts for the first time. The business says it will now make podcast advertising a part of its marketing plan going forward, as a result.

Related to today’s news, Spotify announced it was joining the Global Alliance of Responsible Media (GARM), as the first audio platform member. Here, it will help to set the brand safety standards for the audio industry.

It also announced it would give advertisers tools to exclude sensitive topics from their ad buys, to give them more control over where their messages are heard. And it will offer new controls that will allow advertisers to target ads by context. Spotify offered an example of this by explaining how an animal shelter could target ads at a podcast about pets.

Podcasts historically have struggled to monetize effectively, outside of larger networks that could deliver sizable audiences across their various programs. That’s why Spotify has been snatching up various networks over the years, like Megaphone, Gimlet, Parcast and The Ringer, for example. But for smaller publishers, it’s been difficult to compete and capture much, if any, of the potential advertising revenue.

With the expansion of the Spotify Audience Network to Anchor, creators would at least have a better chance at being exposed to more advertisers and campaigns. But as the payouts are still based on their audience size, it won’t likely dramatically change their fortunes overnight. However, Anchor does offer podcasters a few other ways to monetize, including its newer podcast subscriptions and Ambassador ads (which lets creators with over 50 listeners promote Anchor), in addition to the premium sponsorships available to shows with larger audiences.