Byteboard, a service designed to replace the pre-onsite technical interview part of a company’s hiring process with a web-based alternative, will be spinning out of Google, TechCrunch learned and Google confirmed. The product was originally incubated as part of the company’s internal R&D lab known as Area 120, where it’s been led by CEO Sargun Kaur. With this move, Byteboard will be the first Area 120 project to exit Google and become its own standalone company. But Google notes this will be an exception, not the rule.

Google told us that the spinout will have no impact on any existing Area 120 teams or the group’s future strategy. Instead, its R&D division will continue to focus on funding projects that are most likely to advance Google’s own opportunities, the company said.

In addition to the spinout, Byteboard has taken on new investment from Cowboy Ventures and others, in the $10 million-$15 million range. But we understand this is not a “buyout,” as Google will retain equity in the new company, which will continue to be led by co-founders Kaur and Nikke Hardson-Hurley.

“We’re thrilled to see the strides Byteboard has made over the past three years incubating within Google’s Area 120,” a Google spokesperson told TechCrunch. “Byteboard’s solution is equipping high-growth businesses with the tools they need to assess and hire top technical talent, with greater efficiency and fairness. We look forward to continuing our work with Sargun, Nikke and the rest of the Byteboard team,” they said.

Launched in 2019, Byteboard’s idea was to create a tool that would make the technical interview experience less tedious and more effective. The team noted at the time that the current process for interviewing software engineers didn’t really work for measuring how well someone would do in a day-to-day engineering job. Instead, interviews often benefitted those who had the time and resources to prepare, as they would test more for memorization rather than the practical application of people’s skills. 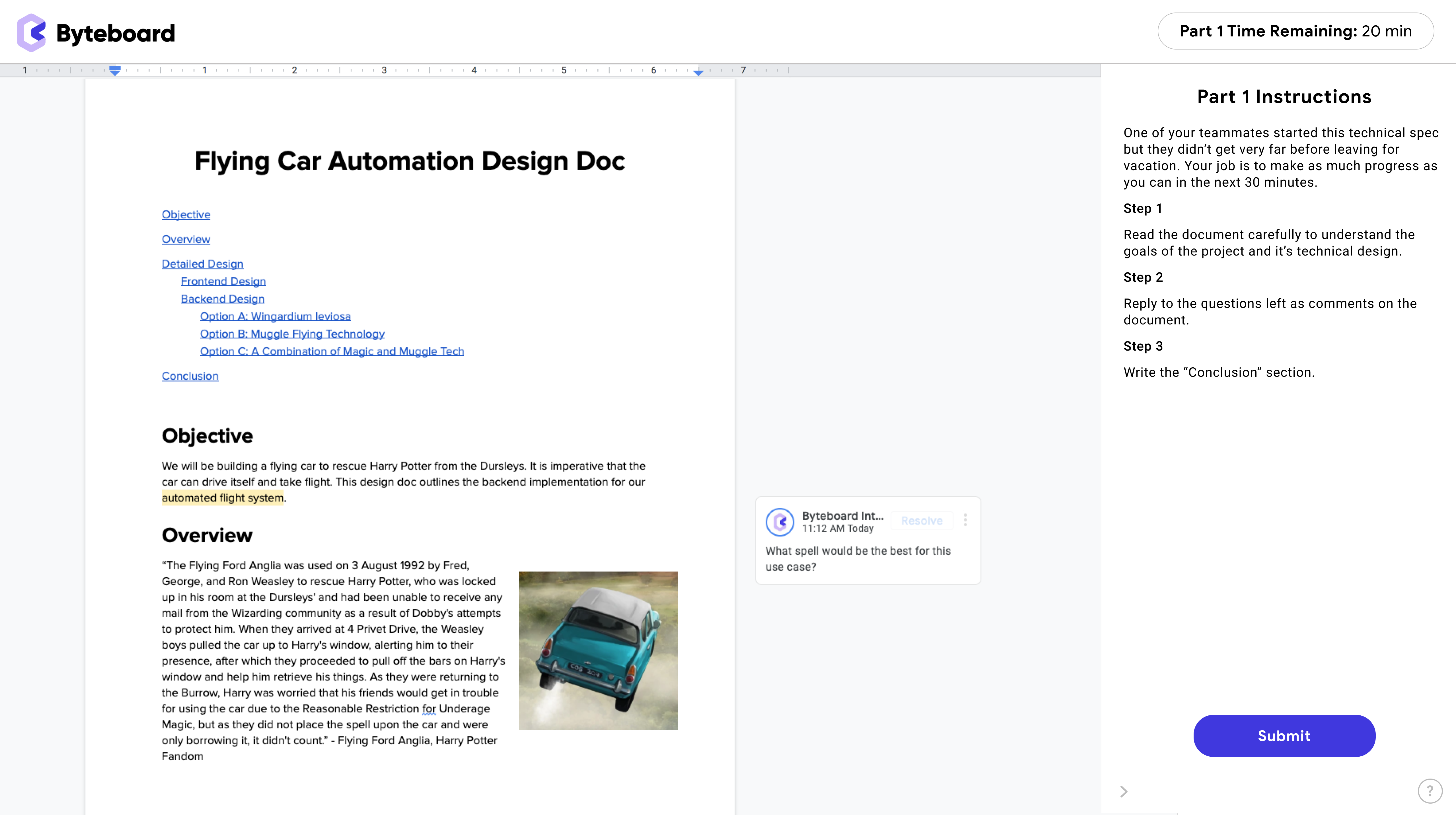 Byteboard flips this around by presenting job candidates with a real-world coding environment where they can select from supported languages like Java, Python, Ruby, C++, C#, JavaScript (node.js), Go and PHP.

Its end-to-end service includes the interview platform, a bank of calibrated questions across 20+ essential software engineering skills and an assessment after the fact. A group of experienced engineers review and rate the interviews. And this evaluation is handled anonymously, with the aim of taking the bias out of the process.

The business took off following its 2019 debut. After a brief slump during the early days of COVID lockdowns, Byteboard picked up again in Q3 2020 as companies returned to hiring. According to Byteboard’s website, those using its service have included Lyft, Hulu, Figma, Imperfect Foods, PlayVS, Betterment, Robinhood, GoodRx, ETHOS, Ezoic and Glowforge.

In addition to the benefits of running the interview process through the web, instead of in-person (another concern in the COVID era), the quality of the data and assessment, and the less stressful environment for the candidates, Byteboard could also save companies money as they would no longer have to pay engineers to staff the interviews and measure the results.

However, the potential for Byteboard may have been limited as a Google-owned product.

Because engineers are a part of the human evaluation process with Byteboard, that would have made Google a part of the hiring group for other companies — including, in some cases, companies it directly competed with. That obviously raises ethical issues, as companies generally wouldn’t let competitors involve themselves in their hiring process. This is largely why Byteboard is moving forward as its own business, instead of a Google-owned project.

Of the half-dozen total team members at Byteboard, a few are joining the standalone company and a couple are choosing to stay at Google where they’ll move on to new projects, a source close to the matter told TechCrunch. Google didn’t confirm the details of this aspect of the deal, but noted Byteboard will continue to expand on its core product and operational focus, with more to share over the next few months.