Google today announced a change to its online ads, which will now display new disclosures that allow web searchers to see not just who the advertiser is and why the ad was served to you, but also what other ads the advertiser has run with Google, starting with the most recent. The changes are a part of Google’s broader revamp of its ads business in the face of increased regulatory scrutiny and a broader shift across the tech industry to technologies that promote transparency and consumer privacy.

In this case, Google is building on last year’s launch of its advertiser identity verification program, which requires advertisers to disclose their personal information — including documents that prove they are who they say they are and those that confirm which country they operate from — as well as details about what they’re selling. These disclosures began rolling out last year to advertisers who buy ads from Google’s network. So far, Google says it’s begun verifying advertisers in over 90 countries worldwide.

Now it’s including expanded disclosures in its “About this Ad” product, too.

Within these new advertiser pages, anyone will be able to click to learn more about the advertiser and access a menu where they can view all the ads a specific advertiser has run over the past 30 days.

Google presents this as a useful tool from a consumer perspective, by noting how a consumer who saw a product for sale, like a coat, could use the tool to learn more about a brand and its other products. But it’s clearly also useful as a means of identifying possible bad actors in the advertising ecosystem, as it would showcase a history of the advertisers’ ads in one public-facing destination. 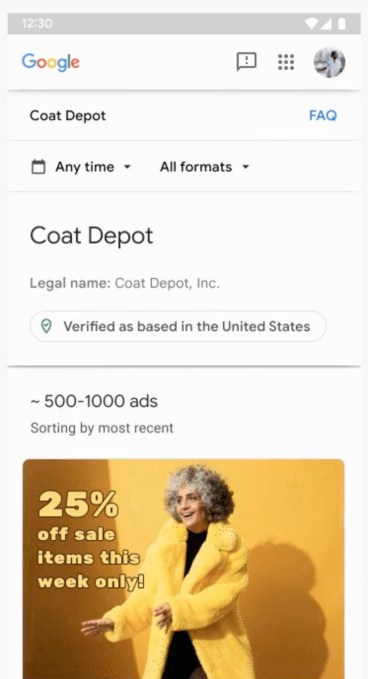 From here, users will also more easily be able to report an ad for violating Google policies around things like prohibited or restricted content, such as counterfeit goods, dangerous products, inappropriate content, abuse, violations of interest-based ad policies, ads that deceive the user, noncompliance with local election laws and regulations, and more.

The changes come about at a time when Google’s approach to online advertising had been shifting. Google hints at its broader strategy today, saying the new ad disclosures “build on our efforts to create a clear and intuitive experience for users who engage with ads on Google products.” It also noted that over 30 million users interact with its ads transparency and control menus on a daily basis. For a feature that’s relatively buried in the product — you have to click the tiny “i” icon to access these menus — that speaks to Google’s massive global scale.

To date, Google has also announced a number of significant moves in the ads space, including the addition of integrated ad-blocking in Chrome, new limits to political ad targeting, and it announced plans to move away from third-party cookies — though these have since been delayed.

Google notes that election ads will continue to be available in its political transparency report. With these ads, the company also displays the “paid for by” disclosure to ensure users understand who paid for the ad. However, all non-political content will appear in the advertiser pages, it says.