Peanut, a social networking app for women, initially found traction connecting women in the earlier stages of their motherhood journey. But over the years, the network expanded to support women through other life stages. Now, that will include menopause, as well — a life stage that will impact nearly half the world’s population at some point. But there are few online communities where women can connect and learn.

“We’ve been thinking about this life stage for a long time, in terms of how it is so underserved,” explains Peanut founder and CEO Michelle Kennedy. “By 2025, there are going to be a billion women who are in menopause at that moment…and yet, when you think about what is there and accessible in terms of community, social [networking], and support — there’s literally nothing,” she says.

The company saw the opportunity in this market by observing what women were already discussing on the app, Kennedy says.

Although the app had historically skewed toward younger women just getting started with marriages and family, there were a number of women who had undergone surgical or chemically induced menopause because of something like breast cancer or some other medical condition. This had put them into early or premature menopause, and they began to discuss how that was impacting their life — particularly as younger parents. There were also women who felt like they may have begun to experience menopause but were having their concerns dismissed by their doctors because they were too young. They wanted to talk about their symptoms with others who were going through the same thing. Others, meanwhile, were older and entering menopause, and were in search of community. 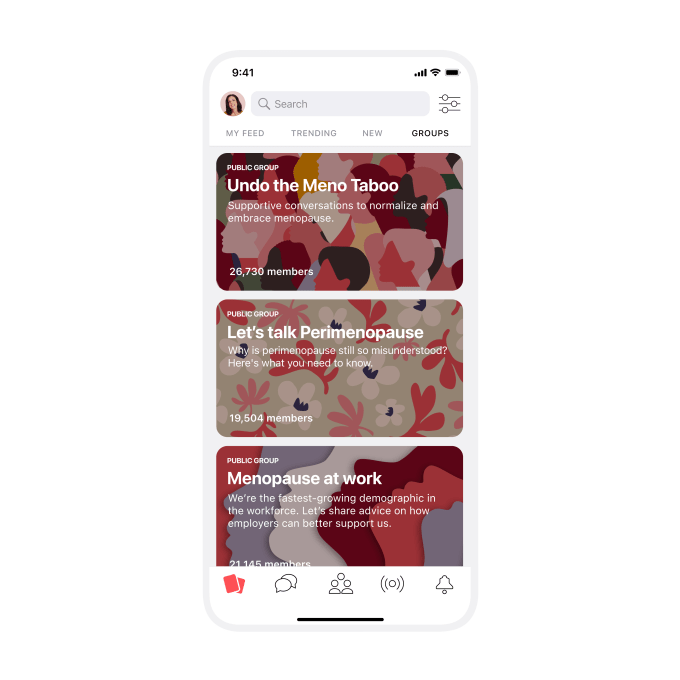 To address this market, Peanut is expanding with the launch of Peanut Menopause, a dedicated space in the app where women can meet others who are at a similar life stage — whether that’s other premenopausal, menopausal or postmenopausal women.

Women can join groups, ask questions and get advice, or even join live audio conversations hosted by experts, through Peanut’s newer live audio rooms feature, Peanut Pods.  And they can use the app’s matchmaking feature to discover other women who are also in their same demographic, where they can chat using messaging or video.

Kennedy notes that the topic of menopause is something women have historically kept quiet about, often suffering in silence due to the lack of resources available to them when it comes on online networking and support groups. 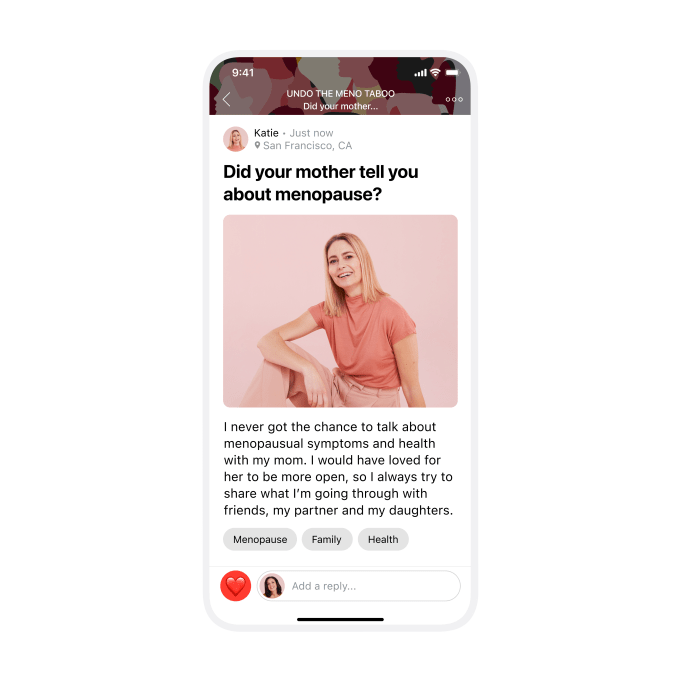 The expansion may bring a broader group of women to Peanut. Today, the average age of the Peanut user is around 32, but the menopause-focused communities may attract women in the 49-plus age demographic, in addition to those who are going through the experience at a younger age, for other reasons.

Unfortunately for Peanut, not all investors see the opportunity in addressing the needs of menopausal women. In fact, on a recent phone call, Kennedy said one investor seemed dismayed about the expansion, noting they had really loved “the younger age demo.” Kennedy said this comment blew her away.

“They are women who are at a stage in their life where they probably have more disposable income,” she said of the new demographic Peanut is now including. “They are more considered users, in many respects. They’re not as flighty. They don’t have 30 apps on their phone, and the ones they have on their phone they’re really invested in. It’s just astonishing to me that someone in the investment community would make a comment like that,” she adds.

Peanut is not yet monetizing its users and doesn’t intend to do so using ads. Instead, the company’s plan is to eventually introduce the freemium model where women will pay to unlock a set of premium features — a model that worked well in the dating app industry, where Kennedy has roots as the former deputy CEO at dating app Badoo and an inaugural board member at Bumble.

The feature is the latest in a long line of expansions over the years — including Q&A forums, Peanut Pages, Peanut Groups and, recently, Peanut Pods — that have helped Peanut evolve into an online community that serves over 2 million users. The Peanut app is available as a free download across both iOS and Android, while a preview of its communities are available on the web.