Less than five months after raising $115 million, spend management startup Ramp announced today it has raised $300 million in a Series C round of funding that values the company at $3.9 billion.

That’s more than double the $1.6 billion that New York-based Ramp was valued at in April at the time of its Series B.

It’s been a good year for Ramp, which first launched its corporate card in August of 2019. Since the beginning of 2021, the company says it has seen its number of cardholders on its platform increase by 5x, with more than 2,000 businesses currently using Ramp as their “primary spend management solution.” The transaction volume on its corporate cards has tripled since April, when its last raise was announced. And, impressively, Ramp has seen its transaction volume increase year over year by 1,000%, according to CEO and co-founder Eric Glyman. Given the company’s business model (it makes money mostly off interchange fees), Ramp also saw its revenue increase by the same amount during that time frame.

A wide range of customers use Ramp from startups/unicorns such as Ro, DoNotPay, Better, ClickUp and Applied Intuition to established businesses like Bristol Hospice, Walther Farms, Douglas Elliman and Planned Parenthood.

“The pace of growth in the business has been a lot faster than people expected and so that’s a big part of what’s underpinning this new investment and valuation,” Glyman told TechCrunch. “Even in August, we’re experiencing what is shaping up to be the fastest percentage growth all year, if not ever.”

Indeed, such big growth numbers are more commonly seen in the very early stages of a company, and tend to lessen over time as a company matures.

Says Founders Fund’s Keith Rabois: “As the company has grown, I’ve continued to invest heavily because it’s rare to find a business with a growth rate that is actually increasing as it gets larger. Typically growth slows as a company scales, but demand for Ramp’s product is only accelerating as the team builds awareness and strengthens their product offering.”

Ramp also today announced its acquisition of Buyer, a “negotiation-as-a-service” platform that claims to save its clients an average of 27.3% on big-ticket purchases, such as annual software contracts.

With the addition of the 10-person Buyer team, Glyman said Ramp will be able to offer its customers a “customized and proactive approach” to savings on large purchases.

“There are more B2B growth SaaS companies than ever before, and they’re better at charging than they’ve ever been,” he noted. “Buyer is viewed as the leader of a generation of startups that are trying to flip the tables and actually help customers negotiate rates down. Very large companies might have procurement departments to negotiate rates, but for those who don’t, Buyer is very skilled at identifying what new contracts are coming up and negotiating them down.”

It has saved its customers about 27% on SaaS contracts.

The buy follows a partnership that was forged earlier this year before Ramp realized that it could “be even stronger by having them fully as a part of the Ramp team, and and really build out even further.”

Over time, Ramp  intends to expand its product offering as a result of the acquisition. By combining Buyer’s team with benchmarking spend data from millions of transactions on its platform, Ramp says it wants to help its customers negotiate the best rate on “anything that can be purchased with a card, from travel to software — with the goal of shifting purchasing power back into the hands of buyers.” 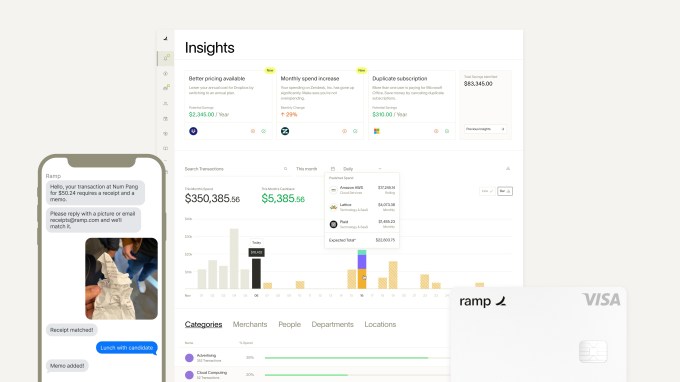 Other ways Ramp helps its customers save include offering 1.5% cash back “on everything,” helping them identify ways to spend less, such as identifying and canceling duplicitous subscriptions and identifying redundancies in licenses. It also shows companies when better pricing is available. One example of this is letting them know they can save 20% by switching to an annual rate, as opposed to monthly. It also has helped customers save by getting rid of software like Concur, Expensify or Bill.com by helping them manage their expenses. Ramp claims that its customers on average save 3.3% annually by switching their corporate card spending to Ramp.

Earlier this year, the company added merchant blocking to its corporate credit card, which Glyman says has probably become one of the company’s most used features since adoption.

Looking ahead, the company plans to use its new capital to speed up the development of its finance automation platform. It’s also going to naturally continue to hire, adding to its nearly 150-person team. For context, Ramp started the year with 65, people and employed about 100 at the time of its April raise.

“Hiring is going to be the biggest use of our capital,” Glyman told TechCrunch.

The startup is also going to invest heavily in product development, including expansion into broader B2B payments, and marketing and awareness. It’s also going to look for more acquisition targets.

While Ramp currently makes money mostly by interchange fees, Glyman told me previously that the two-year-old startup thinks of itself as a SaaS operator.

“Our long-term strategy is to develop great software,” he said.

No doubt the spend management space is heating up. Last week, Brex announced it was acquiring one-year-old Weav for $50 million in its first significant acquisition. Founded in 2017, San Francisco-based Brex earlier this year was valued at $7.4 billion after raising a $425 million Series D led by Tiger Global. It is more focused on earlier-stage startups, whereas Ramp tends to serve larger, more established companies.