Ask any employee and they’ll tell you one of their least favorite things to do is file expenses. And for companies, the process of managing corporate spend is one of their biggest challenges.

Corporate credit cards help ease that pain, so it’s no surprise that the competition between startups in the space is heating up by the day.

One of the fastest growing players in the space is Ramp, a fintech company that earlier this year secured a $150 million debt facility with Goldman Sachs after having raised a $30 million Series B in late December 2020.

Today, the New York-based company is announcing a new feature that it says will give its corporate customers greater control and flexibility over the way their cards are used. Specifically, Ramp said it now offers its customers the option to approve or block merchants on the cards they offer to their employees.

In an exclusive interview with TechCrunch, Ramp co-founder and CEO Eric Glyman said the move was in response to customer demand.

“This was one of our most requested features, especially from companies with over 100 employees,” he told TechCrunch. “They said, ‘I can block a spam call. It’s crazy I can’t do this with my credit card.’ ” 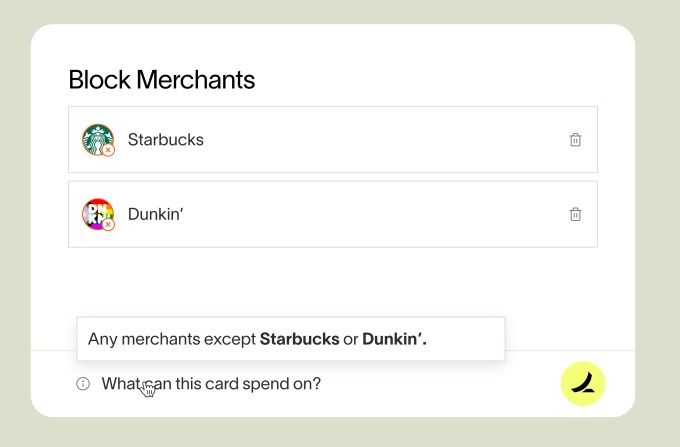 With the new feature, Ramp says companies “have complete control” over how their employees use their corporate cards, down to the vendor level. It allows companies to outline specifically who employees can spend with, which vendors can be charged on what card and how much they can charge.

So, why is this a big deal? Glyman said this means that merchant-specific cards greatly reduce the risk from stolen or compromised cards. It also helps keep employees from inflating expenses or filing false reimbursement claims.

“This gives security and control back to finance teams in a way that was never before possible,” he said.

It also helps companies in their quest to save money by using corporate credit cards in the first place, Glyman added.

“For example, they can restrict spending to businesses or companies that they have discounts or preferential pricing with,” he said. “It’s another layer of enforcement for finance teams.”

The process was not an easy one since understanding and clustering unique identifiers to be able to identify merchants was “technically complex,” according to Glyman.

For its part, Ramp counts “thousands” of businesses as customers, with well into the tens of thousands of individuals using its cards.

Brex, Ramp tout their view of the future as Divvy is said to consider a sale to Bill.com

“We’re powering into nine figures monthly and over $1 billion in spend,” Glyman said.

The company must be doing something right.

Since raising the credit line earlier this year, Ramp has seen continued growth, more than doubling volume over the past three months.

While Glyman declined to reveal specific revenue figures, he said Ramp grew by more than 6,000% in 2020, compared to the year prior, and has grown over 1,000% over the past 12 months. Customers are typically fast-growing startups as well as small businesses. Some of its more well-known startup customers include Ro, Sleep Eight, ClickUp, Marqeta, Candid, Better, Truebill and Nuggs.

While Ramp makes money mostly by interchange fees, Glyman said the two-year-old startup thinks of itself as a SaaS operator.

“Our long-term strategy is to develop great software,” he said.