Facebook’s journey toward making virtual reality a thing has been long and circuitous, but despite mixed success in finding a wide audience for VR, they have managed to build some very nice hardware along the way. What’s fairly ironic is that while Facebook has managed to succeed in finessing the hardware and operating system of its Oculus devices — things it had never done before — over the years it has struggled most with actually making a good app for VR.

The company has released a number of social VR apps over the years, and while each of them managed to do something right, none of them did anything quite well enough to stave off a shutdown. Setting aside the fact that most VR users don’t have a ton of other friends that also own VR headsets, the broadest issue plaguing these social apps was that they never really gave users a great reason to use them. While watching 360-degree videos or playing board games with friends were interesting gimmicks, it’s taken the company an awful lot of time to understand that a dedicated ”social” app doesn’t make much sense in VR and that users haven’t been looking for a standalone social app, so much as they’ve been looking for engaging experiences that were improved by social dynamics.

Zuckerberg is turning trillion-dollar Facebook into a ‘metaverse’ company, he tells investors

This all brings me to what Facebook showed me a demo of this week — a workplace app called Horizon Workrooms, which is launching in open beta for Quest 2 users starting today.

The app seems to be geared toward providing work-from-home employees a virtual reality sphere to collaborate inside. Users can link their Mac or PC to Workrooms and livestream their desktop to the app while the Quest 2’s passthrough cameras allow users to type on their physical keyboard. Users can chat with one another as avatars and share photos and files or draw on a virtual whiteboard. It’s an app that would have made a more significant splash for the Quest 2 platform had it launched earlier in the pandemic, though it’s tackling an issue that still looms large among tech-savvy offices — finding tech solutions to aid meaningful collaboration in a remote environment.

Horizon Workrooms isn’t a social app per se but the way it approaches social communication in VR is more thoughtful than any other first-party social VR app that Facebook has shipped. The spatial elements are less overt and gimmicky than most VR apps and simply add to an already great functional experience that, at times, felt more productive and engaging than a normal video call. 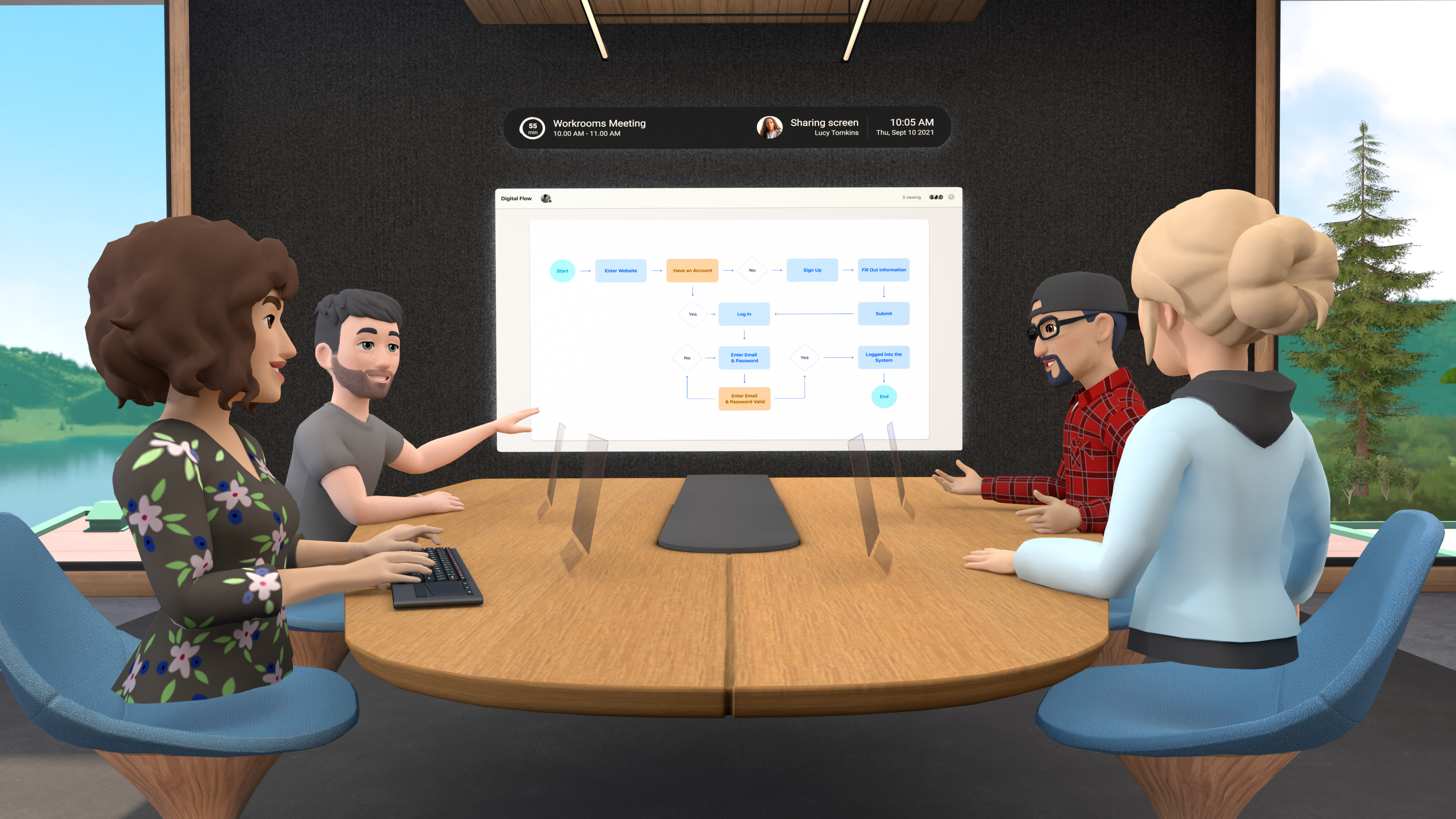 It all plays into CEO Mark Zuckerberg’s recent proclamation that Facebook is transitioning into becoming a “metaverse company.”

Now, what’s the metaverse? In Zuckerberg’s own words, “It’s a virtual environment where you can be present with people in digital spaces. You can kind of think of this as an embodied internet that you’re inside of rather than just looking at.” This certainly sounds like a fairly significant recalibration for Facebook, which has generally approached AR/VR as a wholly separate entity from its suite of mobile apps. Desktop users and VR users have been effectively siloed from each other over the years.

Generally, Facebook has been scaling Oculus like they’re building the next smartphone, building its headsets with a native app paradigm at their core. Meanwhile, Zuckerberg’s future-minded “metaverse” sounds much more like what Roblox has been building toward than anything Facebook has actually shipped. Horizon Workrooms is living under the Horizon brand, which seems to be where Facebook’s future metaverse play is rooted. The VR social platform is interestingly still in closed beta after being announced nearly two years ago. If Facebook can ever see Horizon’s vision to fruition, it could grow to become a Roblox-like hub of user-created games, activities and groups that replaces the native app mobile dynamics with a more fluid social experience.

Not all is predictable on Facebook’s social Horizon