San Francisco-based Ample has raised a $160 million Series C to scale its battery swapping service, the largest round yet for the 8-year-old startup that wants to completely rethink how we use electric vehicles.

Ample’s approach is relatively straightforward: Cars equipped with the company’s modular battery pack can drive into one of Ample’s automated charging pod locations and swap out their depleted batteries for ones that are fully charged. The swapped-out batteries are then recharged in the pod and ready to be reinserted into another vehicle.

Although Ample’s battery swapping model is simple on paper, the company is proposing thinking about EV batteries in a completely different way. Instead of an EV battery being something that needs to be recharged, like an iPhone, Ample wants to turn them into things that can be swapped out, like batteries in a digital camera.

“We realized that there’s this big elephant in the room with electric vehicles and [it’s that] nobody is that excited about spending an hour, two hours or three hours charging their vehicle,” Ample co-founder John de Souza said.

Industry’s response has been to develop technology like DC fast chargers, which have managed to shave charging time down to only 20 or 30 minutes. But de Souza said that improvements in charging time don’t get rid of fundamental problems: “[Fast charging] generates a lot of heat; the grid doesn’t support it,” he said. “Even if you could have batteries you charge in five minutes, you’d need chargers that were massively powerful and you’d need power plants around every corner to do it.”

Ample is currently focused on fleets – it operates five battery swapping stations in the Bay Area for participating Uber drivers, and it also locked in a partnership with Sally, an EV rental company for taxi and last-mile deliveries in New York City. But the company sees its battery swapping service as suitable for consumers, as well. Ample co-founder Khaled Hassounah said battery swapping could also be useful for personal consumers who don’t have a good charging solution available to them, like people who live in apartment buildings. “We’re really a lot more focused on the cars that are coming on the road” rather than EVs that have already been manufactured, Hassounah added. 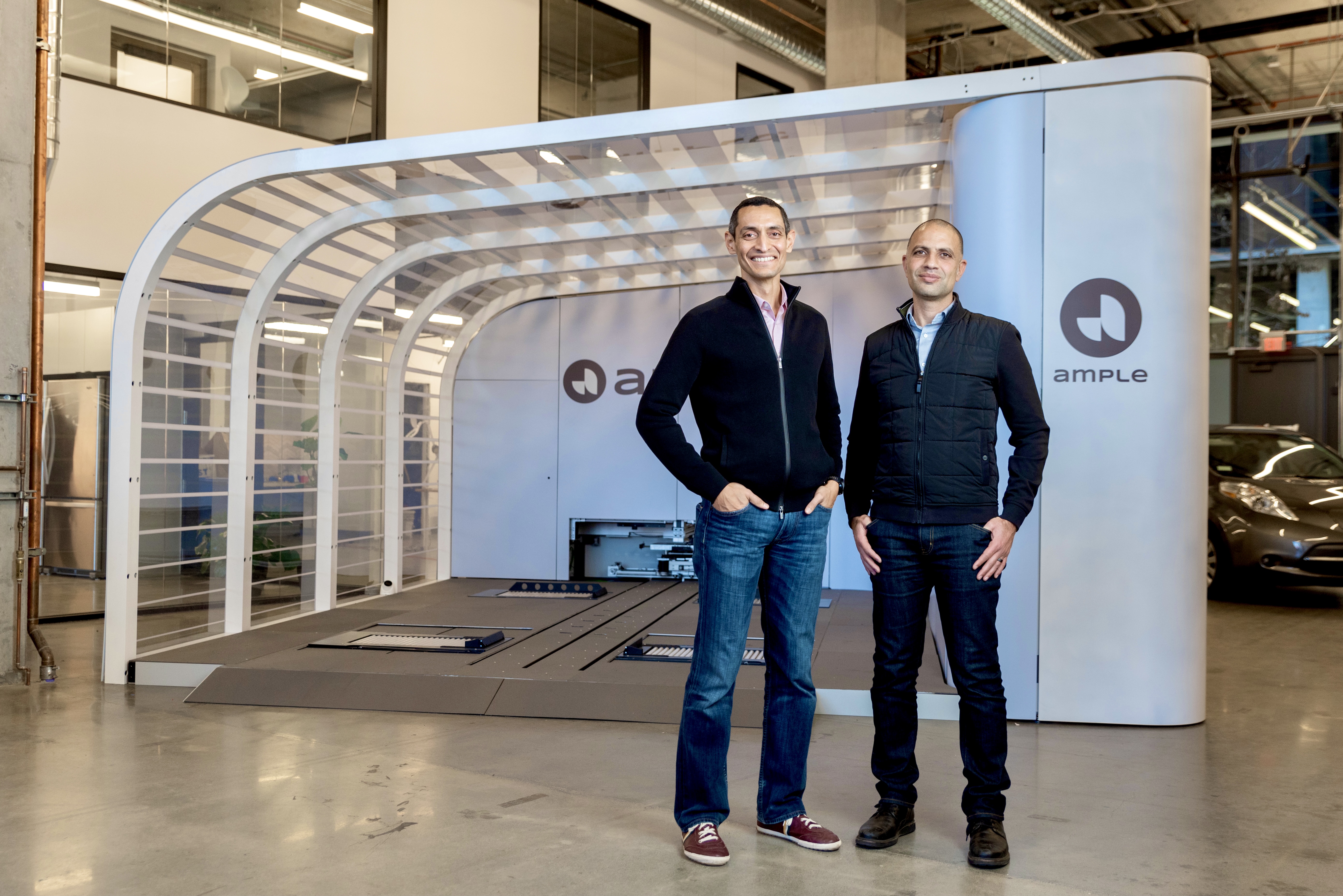 The company says that its modular system means that drivers only need to carry around as much battery as they need. For Ample, that means less battery waste and less weight in the vehicle.

Much of Ample’s vision relies on buy-in from automakers. For example, the company is imagining that when a person goes to buy a car, the OEM could offer either a fixed battery option or a vehicle equipped with an Ample battery system.

Ample says it has validated its approach with 10 different car models by working directly with OEMs, and that none of them have required making modifications to the vehicle. That doesn’t mean that there are no interfaces between the battery and the car that need to be altered — there are things like voltage cables or a cooling line, for example — but that the actual architecture of EVs is simpler than one might think.

“The marketing departments at the OEMs want to tell you that … ‘This is a super-duper battery that is very well integrated with the car; there’s no way you can separate it,’” Hassounah said. “The truth of the matter is they’re built completely separately and so true for almost — not almost, for every battery in the car, including a Tesla.

“Since we’ve built our system to be easy to interface with different vehicles, we’ve abstracted the battery component … from the vehicle,” he added.

Ample said it’s working with five different OEMs right now, “some of the largest OEMs out there,” de Souza said, though he declined to specify which ones. He added that growing demand from fleets goes hand in hand with conversations with OEMs, which are eager to sell vehicles.

It could be an attractive proposal because much of the cost of an electric vehicle is its battery system. The market has seen a version of this idea from Chinese automaker Nio, which offers consumers the option of purchasing a vehicle with or without a battery (for the latter option, Nio leases the batteries). Under the leasing option, drivers shave ¥70,000 ($10,800) off the price of a vehicle. Nio has already completed more than 2.4 million battery swaps for Chinese drivers, founder William Li said in May.

Looking to the future, Ample is focused purely on scaling: deploying with large customers in new cities. Interestingly, de Souza added that the company is getting a lot of interest from governments who want to shift to electric transportation but don’t have the requisite charging infrastructure.

“The question is, how can we get more miles and be electric, rather than build more infrastructure?” Hassounah said. “If you go and deploy a million fast chargers and no one uses them, we haven’t achieved anything.”