FreshBooks, a Toronto-based cloud accounting software company focused on SMBs, announced today it has secured $80.75 million in a Series E round of funding, as well as $50 million in debt financing.

Existing backer Accomplice led the equity financing, which the company described as “an inside round” that propelled FreshBooks to unicorn status with a valuation of “over $1 billion.”

J.P. Morgan, Gaingels, BMO Technology & Innovation Banking Group and Manulife also participated in the equity investment, along with platform partner and new backer Barclays. With the new capital injection, FreshBooks has now raised a total of more than $200 million in funding over its lifetime.

FreshBooks has built a cloud-based accounting software platform designed to make things like invoicing, expenses, payments, payroll and financial reporting easier for small business owners and self-employed people (and their clients). The company, which says it has served more than 30 million people in over 160 countries, was bootstrapped for the first decade of its life.

After relaunching its accounting platform, FreshBooks has raised another $43 million

As in the case of many startups, FreshBooks was started to solve a pain point for one of its founders. In 2003, FreshBooks’ co-founder Mike McDerment was running a small design agency. When it came to billing clients, he found Word and Excel frustrating to use and felt like they weren’t built to create professional-looking invoices. So he coded his own solution that became the foundation of what is now FreshBooks. The company was self-funded until 2014, when McDerment decided to bring on outside investors and raised $30 million from Oak Investment Partners, Accomplice and Georgian Partners.

In 2019, Don Epperson joined FreshBooks as executive director before transitioning to the role of CEO this year. McDerment, who previously held the position, remains as executive chair of the company.

FreshBooks has 500 employees in Canada, Croatia, Mexico, the Netherlands and the United States — hiring over 100 people in the past year. Also in the last year, the company entered the LatAm market after acquiring Mexico-based e-invoicing company Facturama in September 2020 in an effort to expand its audience in Spanish-speaking markets.

FreshBooks plans to use its new capital toward sales and marketing, research and development and additional strategic acquisitions.

The company will also use its new funding toward investing in markets that are becoming more regulated and helping owners manage their finances through “simplistic workflows,” according to Epperson.

“The need for owners to manage their business digitally has accelerated, and this has changed how small business owners work with bookkeepers and accountants,” Epperson told TechCrunch. “The funding comes as an injection of confidence in our mission to digitally enable small businesses.” 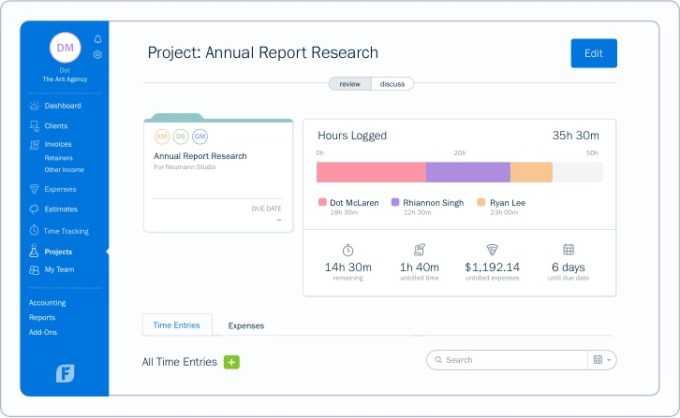 When it comes to growth metrics like year-over-year revenue percentage growth, the exec was tight-lipped, saying only that FreshBooks has “seen significant growth” in the number of new customers since last year, in part fueled by a pandemic-driven increase in new small businesses.

The pandemic also uncovered the need for the company to understand how seismic events affect its customers, Epperson said.

“After analyzing FreshBooks’ own proprietary data, we learned that businesses owned by women were taking three times longer to recover in the U.S. versus businesses owned by men,” Epperson said. “This stat laid the foundation for conducting more research into how the pandemic was affecting businesses across multiple industries and entering into data-sharing partnerships with local governments to help policymakers enact change in the support available to small business owners.”

Jeff Fagnan, founder and managing partner at Cambridge, Massachusetts-based Accomplice, is clearly bullish on FreshBooks’ potential, saying of his firm’s continued investments in the Canadian company over the past seven years: “With more people choosing self-employment, the FreshBooks team fundamentally believes in the growth of small businesses, and the importance of helping these businesses scale. As insiders, we have better context for how the company is scaling and how the market is growing, and this is why FreshBooks is our largest investment to date.”

FreshBooks is the latest in a growing number of Toronto-based unicorns. Late last month, 1Password raised $100 million in a Series B round of funding that doubled the company’s valuation to $2 billion. 1Password first became a unicorn in 2019.