It sounds like a plan concocted by a supervillain, if that villain’s dastardly end was to provide cheap, clean power all over the world: launch a set of three-kilometer-wide solar arrays that beam the sun’s energy to the surface of the Earth. Even the price tag seems gleaned from pop fiction: one hundred million dollars. But this is a real project at Caltech, funded for a nearly a decade largely by a single donor.

The Space-based Solar Power Project has been underway since at least 2013, when the first donation from Donald and Brigitte Bren came through. Donald Bren is the chairman of Irvine Company and on the Caltech board of trustees, and after hearing about the idea of space-based solar in Popular Science, he proposed to fund a research project at the university — and since then has given more than $100 million for the purpose. The source of the funds has been kept anonymous until this week, when Caltech made it public.

The idea emerges naturally from the current limitations of renewable energy. Solar power is ubiquitous on the surface, but of course highly dependent on the weather, season and time of day. No solar panel, even in ideal circumstances, can work at full capacity all the time, and so the problem becomes one of transferring and storing energy in a smart grid. No solar panel on Earth, that is.

A solar panel in orbit, however, may be exposed to the full light of the sun nearly all the time, and with none of the reduction in its power that comes from that light passing through the planet’s protective atmosphere and magnetosphere. 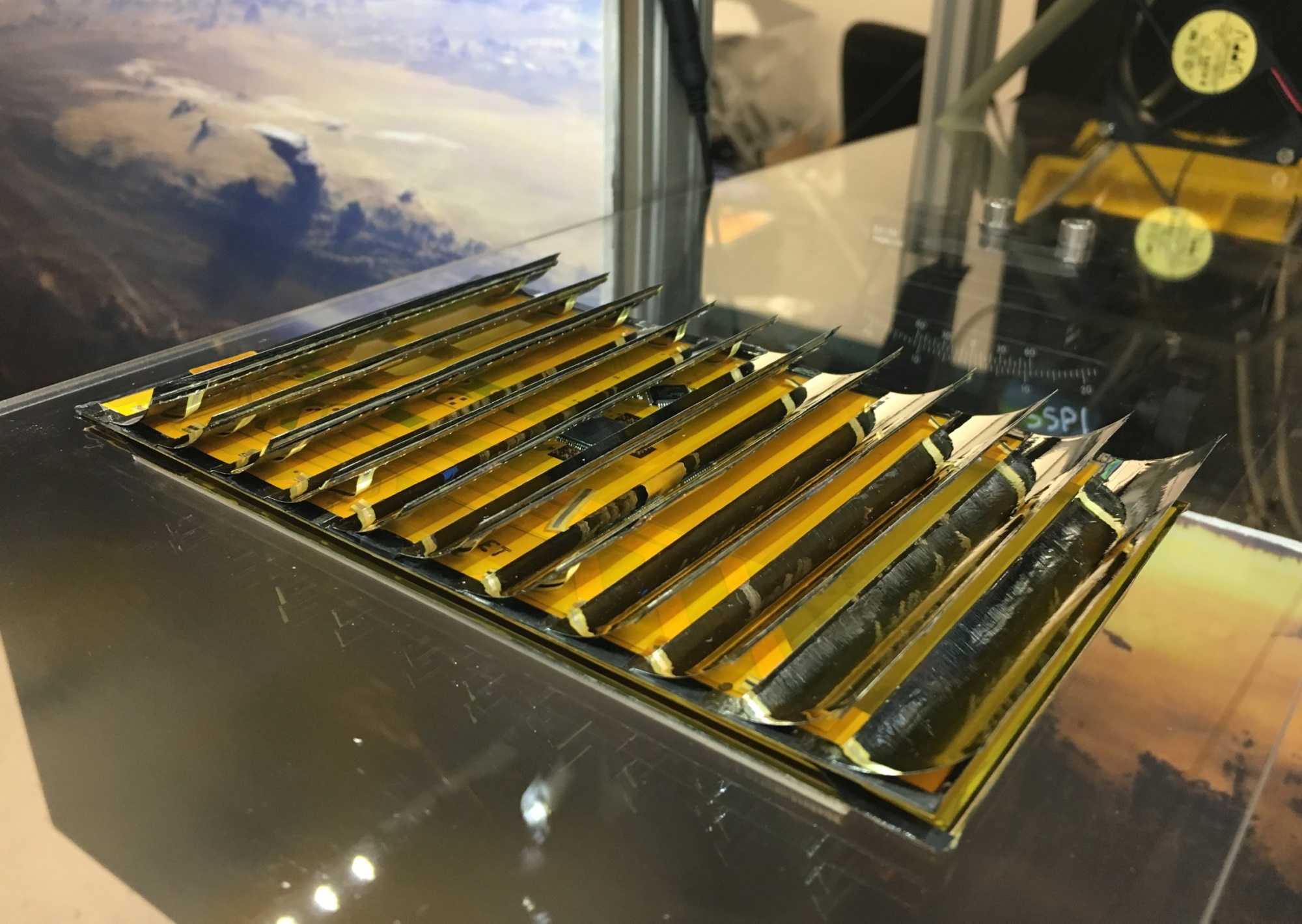 The latest prototype created by the SSPP, which collects sunlight and transmits it over microwave frequency. Image Credits: Caltech

“This ambitious project is a transformative approach to large-scale solar energy harvesting for the Earth that overcomes this intermittency and the need for energy storage,” said SSPP researcher Harry Atwater in the Caltech release.

Of course, you would need to collect enough energy that it’s worth doing in the first place, and you need a way to beam that energy down to the surface in a way that doesn’t lose most of it to the aforementioned protective layers but also doesn’t fry anything passing through its path.

These fundamental questions have been looked at systematically for the last decade, and the team is clear that without Bren’s support, this project wouldn’t have been possible. Attempting to do the work while scrounging for grants and rotating through grad students might have prevented its being done at all, but the steady funding meant they could hire long-term researchers and overcome early obstacles that might have stymied them otherwise.

The group has produced dozens of published studies and prototypes (which you can peruse here), including the lightest solar collector-transmitter made by an order of magnitude, and is now on the verge of launching its first space-based test satellite.

Diagram showing how tiles like the one above could be joined together to form strips, then spacecraft, then arrays of spacecraft. Image Credits: Caltech

These will be small-scale tests (about six feet across), but the vision is for something rather larger. Bigger than anything currently in space, in fact.

“The final system is envisioned to consist of multiple deployable modules in close formation flight and operating in synchronization with one another,” Hajimiri said. “Each module is several tens of meters on the side and the system can be built up by adding more modules over time.” 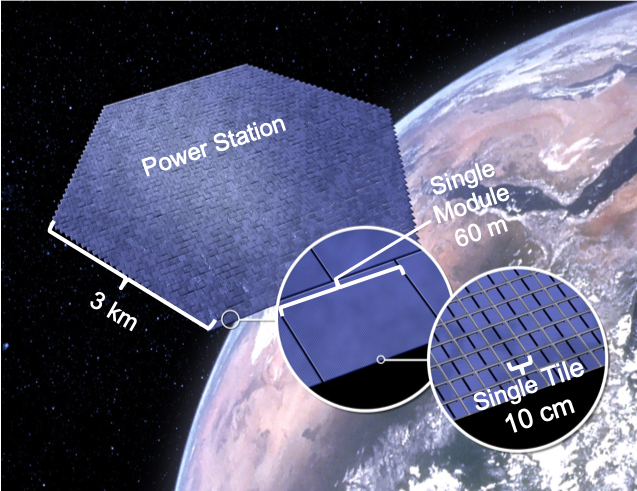 Eventually the concept calls for a structure perhaps as large as 5-6 kilometers across. Don’t worry — it would be far enough out from Earth that you wouldn’t see a giant hexagon blocking out the stars. Power would be sent to receivers on the surface using directed, steerable microwave transmission. A few of these in orbit could beam power to any location on the planet full time.

Of course that is the vision, which is many, many years out if it is to take place at all. But don’t make the mistake of thinking of this as having that single ambitious, one might even say grandiose, goal. The pursuit of this idea has produced advances in solar cells, flexible space-based structures and wireless power transfer, each of which can be applied in other areas. The vision may be the stuff of science fiction, but the science is progressing in a very grounded way.

For his part, Bren seems to be happy just to advance the ball on what he considers an important task that might not otherwise have been attempted at all.

“I have been a student researching the possible applications of space-based solar energy for many years,” he told Caltech. “My interest in supporting the world-class scientists at Caltech is driven by my belief in harnessing the natural power of the sun for the benefit of everyone.”

We’ll check back with the SSPP ahead of launch.