Single-use plastic containers make up a huge amount of the world’s waste, but so far no one has come up with a good way to replace them that’s also easy for consumers and cost-effective. Algramo may have cracked this nut with a combination of reusable containers and distribution points that both makes and saves money, and it’s about to expand its footprint in a big way with a new $8.5 million funding round.

Founded in Chile nearly a decade ago, Algramo is now findings its legs as companies in multiple industries are under immense pressure to go green.

One compelling way to reduce waste is to cut down on single-use plastics, which of course are common for everything from cleaning supplies to soft drinks. The difficulty is figuring out how exactly to do that while not passing the cost on to consumers. If the product is eco-friendly but costs twice as much, only the wealthy will buy it and those working on a tight budget have to go, against their better judgment, with the cheaper, worse option.

“People are deciding between their pocket or their planet,” said CEO José Manuel Moller. “So we needed to be cheaper and better. So rather than make things more complex, we’re trying to make things more simple.”

The solution they’ve arrived at after years of testing is a modified label for existing products, like detergent or shampoo, that includes an RFID tag that lets the consumer easily refill the bottle at a dispenser. Sold at bulk prices and having removed the cost of packaging (30% of the product’s cost, Moller estimated), it’s cheaper and requires nothing but going to a different shelf at the store.

The breakthrough wasn’t the idea, though — it was the relationships with big brands. If someone has to drive past their normal grocery store to refill your dish soap, they’re more likely to just buy a new bottle. Similarly, if only products on offer for bulk refilling are random off-brand ones, the same thing happens. So Algramo had to make the case to the Walmarts and Unilevers of the world — and very recently, they started to listen, at least at the local level.

“This was going to happen with or without Algramo,” Moller said. “But we’re integrating into their supply chains, working with the retailers and the brand so they don’t disrupt existing relationships. And actually, ordering the product in bulk saves them about 60% of the space.”

There are arrangements in place with Unilever, Nestlé, Colgate-Palmolive and Walmart Chile. By offering a turnkey solution that brings together big brands and big retailers and saves consumers a little cash, everyone gets what they want. Originally, Algramo operated using a fleet of small vehicles equipped with dispensers, but ultimately the retail avenue proved to be the more successful one. 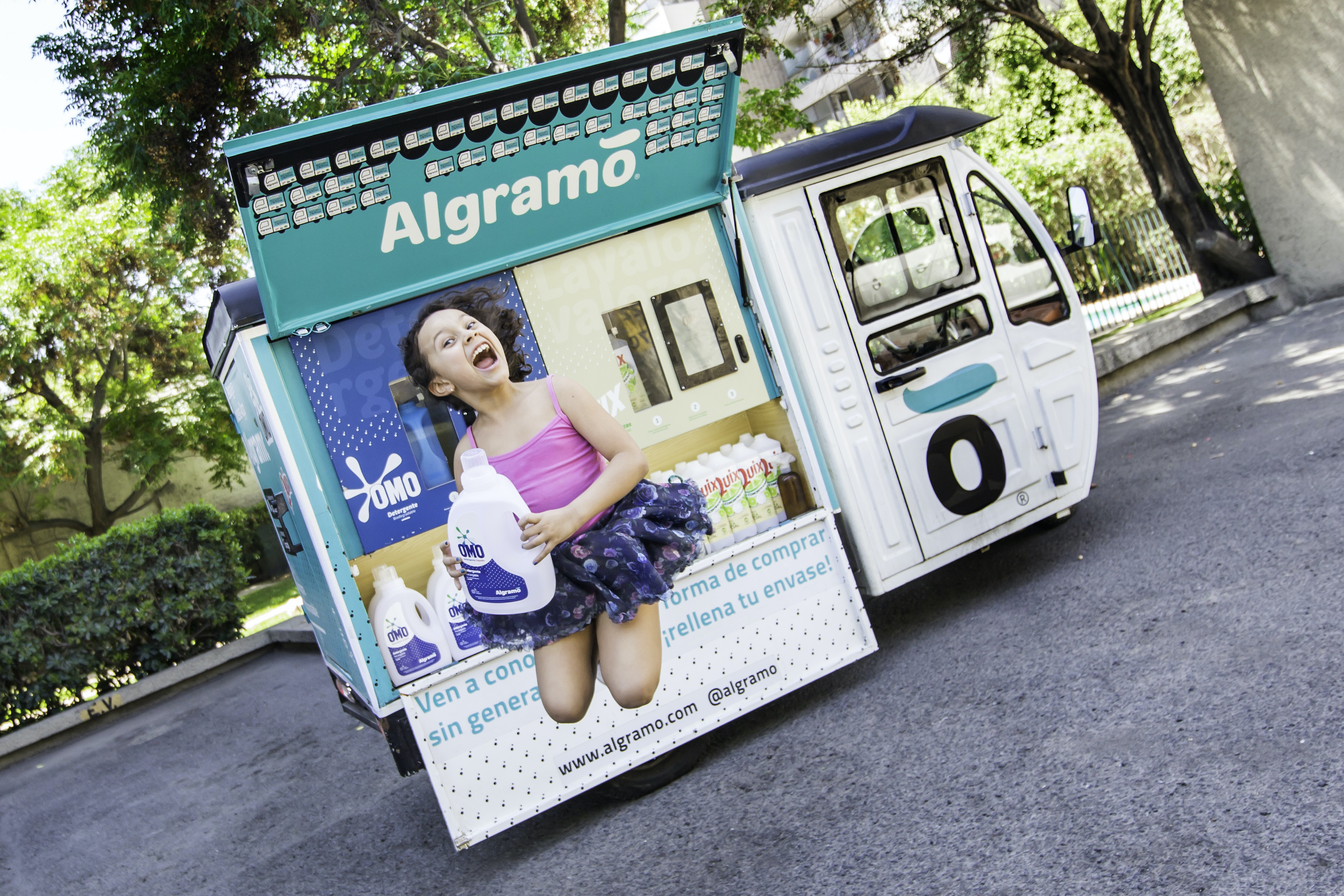 The vehicles still exist, though, as this kid is happy to emphasize.

There are now Algramo stations all over Chile, with around 50,000 users repurchasing products in bulk. Those products, by the way, were determined not by profitability but by which is the worst polluter. The worst by far, Moller said, is beverages, but those present a different challenge — one the company is happily taking on but not quite ready to debut.

Instead, there are frequently used products like laundry soap and toiletries — even dog food (dry, obviously … for now). And Algramo was careful to ensure that users can buy as much or as little as they want at the bulk rate, making it more accessible for people who have to make every penny count.

The work in Chile has helped validate the idea at scale, and now the company is raising money ahead of a smattering of pilots around the world. There are projects underway in Jakarta, New York, Mexico and London, all of which no doubt require a lot of local footwork, since different regulations, sub-companies, and distribution networks will necessitate new contracts and agreements everywhere they attempt to make a beachhead.

LivingPackets hopes to nurture a circular economy with its smart parcels

Moller said that there are parallel efforts along the lines of Algramo, but that ultimately their platform may very well end up compatible with the others. Owning both the retail and brand relationships is paramount, then those with the customer, but the last step may be adapted to different circumstances. For instance, if there’s a successful reverse logistics system in place (such as the reusable food containers common all over India) that may be part of the solution, and if someone like a grocery chain were to build their own hardware solution, Algramo would be happy to operate at least partly behind the scenes. (Also, they own several patents.)

That’s all pie in the sky for now, as Algramo focuses on building its own presence in various major markets. If you’re in one of the locations mentioned, keep your eye out at your local big retail or grocery chain for the Algramo station, or just check the map at the bottom of their website.