Monarch, a subscription-based platform that aims to help consumers “plan and manage” their financial lives, has raised $4.8 million in seed funding.

Accel led the round, which also included participation from SignalFire, and brings the Mountain View-based yet fully distributed startup’s total funding since its 2019 inception to $5.5 million.

Co-founder and CEO Val Agostino was the first product manager on the original team that built Mint.com. There, he said, he saw firsthand that Americans with a greater understanding of financial matters “needed software solutions that went beyond just tracking and budgeting.”

“They needed help planning their financial future and understanding the tradeoffs between competing financial priorities,” he said.

Monarch aims to help people address those needs with software it says “makes it easy” for people to outline their financial goals and then create a detailed, forward-looking plan toward achieving them.

“We then help customers track their progress against their plan and automatically course correct as their financial situation changes, which it always does,” Agostino said.

Monarch came out of private beta in early 2021 with apps for web, iOS and Android, and is priced at $9.99 per month or $89.99 per year. The startup intentionally opted to not be ad-supported or sell customers’ financial data.

These approaches are “misaligned with users’ financial interests,” Agostino said.

“We felt that a subscription business model would best support that ethos and align our users’ interests with our own,” he added. Since launching publicly, Monarch has been growing its paid subscriber base by about 9% per week. 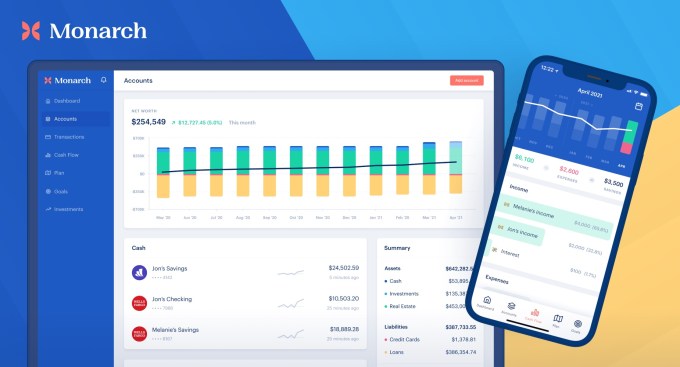 Monarch launched during the pandemic, the uncertainty of which carried over into people’s financial lives, believes Agostino.

“As a result, we saw a lot of people make use of Monarch’s forecasting features to compare different ‘what if ‘scenarios such as switching jobs or moving to a different city or state,” he said.

Earlier this month, TechCrunch reported on a company with a similar mission, BodesWell, teaming up with American Express on a financial planning tool for its cardholders. Agostino said that Monarch is similar to BodesWell in that both startups help customers map a financial plan and future.

“The difference is that Monarch also has a full suite of PFM tools, such as budgeting, reporting and investment analysis,” he said. “The benefit to the consumer is that because Monarch is connected to your entire financial picture, we can help you actually stay on track with your financial plan and/or update the plan in real time if needed.”

Accel’s Daniel Levine said that until he came across Monarch, he was “somehow still a Mint customer despite its obsolescence.”

Over the past decade, the landscape for financial products has expanded dramatically, with more people having brokerage and crypto accounts, for example, Levine said.

In his view, Monarch stands out for a couple of reasons. For one, it’s a subscription product.

“One thing I always hated about Mint was when it would suggest the objectively wrong credit card for me,” Levine said. “It has all of my transaction data, it should tell me the card with the best rewards for me. Monarch is set up to never compromise what’s best for the user in favor of advertising.”

Secondly, Monarch’s aim is to serve as the infrastructure for its customers. To do that, it needs to monitor all of someone’s finances.

“They need to track checking, credit cards, brokerage, real estate and crypto,” he said. “Monarch is committed to doing that. It’s an incredibly painful problem and even though Monarch is a new entrant in the space, I think they’ve clearly separated themselves on that dimension.”