American Express is branching out into financial planning, with a little help from a seven-person startup called BodesWell.

This week, the credit card giant launched a pilot of its first self-service digital financial planning tool, dubbed “My Financial Plan (MFP).” The six-month pilot kicked off on July 11 with about 25,000 select Amex cardmembers.

American Express quietly invested in BodesWell in late 2020 via its venture arm, Amex Ventures. Since then, the financial services behemoth teamed up with the tiny startup to develop the financial planning tool for its users. The new product is designed to give users a complete picture of their financial health and help them make and achieve major life goals, such as buying a house or retirement.

TechCrunch talked with Amex Ventures’ Julia Huang, who led the investment and strategy around the new product, and BodesWell co-founder and CEO Matthew Bellows to learn more details.

The pair actually met while serving on a panel together in 2019.

“I was drawn to the fact that it was not a round-up savings tool, but rather a holistic tool to understand your full financial picture that could be used to plan for the financial impact of your life decisions,” Huang told TechCrunch.

Before deciding to invest in BodesWell, Huang says Amex Ventures — which over time has backed more than 70 startups — had “evaluated the space quite extensively.”

Huang introduced Bellows and his staff to Amex’s Digital Labs team and they embarked on jointly developing a specialized offering for Amex customers. (While Bellow is based in Boston, he says the startup is “globally distributed.”)

“Our goal is to democratize financial planning with our cardmembers by providing detailed insights and forecasts to help them with their holistic planning,” she told TechCrunch. 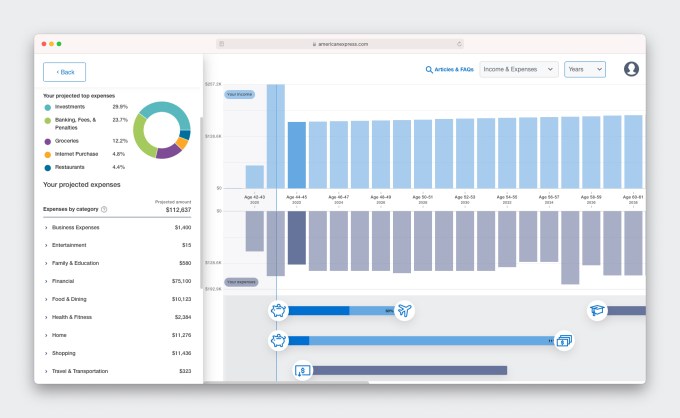 Bellows started BodesWell in early 2019 with the goal of empowering clients and customers to build their own financial plan.

BodesWell will guide users in setting up a financial plan and will work even better if they sync with their other financial information via Plaid so it can “update in real time,” Huang said.

The tool “takes into account income, assets, expenses and liabilities — what cash flow looks like holistically so that users can drag & drop to plan life events,” Bellow said.

An estimated 85 million American households don’t have a financial, planner for a variety of reasons — including mistrust of a planner’s intentions or just feeling overwhelmed by the process.

The product is free during the pilot phase and American Express hasn’t yet determined if it will charge for it afterwards.

Amex Ventures has formed “some level of partnership” with more than two-thirds of its portfolio companies, she added.

“We try to engage with our portfolio in that way, to provide value with our startup ecosystem,” Huang said.

For its part, BodesWell had previously raised about $1.5 million from investors such as Cleo Capital, Ex Ventures, Riot.vc, GritCapital and Argon Capital and angels like HubSpot CEO Brian Halligan and Kintent CEO Sravish Sridhar.