If you can’t say it with words, say it with an emoji. Facebook is announcing a few minor updates today to its Messenger platform, which make it easier than ever to find the exact emoji you’re looking for when reacting to a friend’s message (let’s be real, there’s a big difference between the “crying laughing” and “crying” emoji). This includes a search bar for emoji reactions, and a recently used emojis section. And, if you weren’t let down by the long-awaited “Space Jam” sequel, you can sport your love for hoopster Bugs Bunny with a “Space Jam 2” chat theme, available both on Messenger and in Instagram DMs. Don’t get too excited though — even though this theme sets a basketball as the chat’s emoji, the long-lost, beloved basketball mini game has not yet made its triumphant return to the Messenger app. 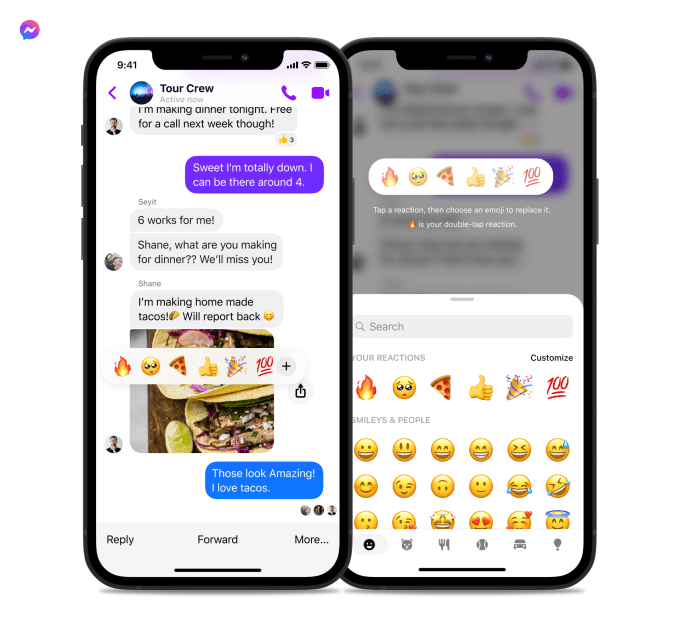 It may not feel like there’s room for innovation in, um, the emoji space, but even Twitter has explored the option of allowing people to emoji-react to tweets. And as live audio has become ever-present — from Clubhouse, to Twitter Spaces, to Spotify’s Greenroom — why not add audio to emojis?

Last week, Messenger debuted Soundmojis, which are what they sound like — emojis with sounds. On the Messenger app, you can use Soundmojis by clicking the smiley face icon in the chat box, which opens up the expressions menu. When you select the loudspeaker icon, you can select from just under 30 standard emojis, but when you click on them, they play sounds, including “Brooklyn 99” quotes, Olivia Rodrigo clips and lines from “Bridgerton.” The “X” emoji plays “Oh No” by Capone, a song that went viral on TikTok.

According to Facebook Messenger, people send more than 2.4 billion messages with emojis on the platform each day. That’s great and all, but if we can tap the car emoji to hear sounds from “Fast & Furious,” when will we be able to tap the soccer emoji to play “keepie uppie” again?

Twitter is exploring the use of Facebook-style emoji reactions