JW Player, a very early mover in the market for online video technology — it powered YouTube’s first video player, before Google acquired it and it built its own — has long been profitable through a business model of providing one-to-many video streaming tools to publishers and others that want to bring video into their own online experiences, without building the technology from the ground up, nor being beholden to companies that might themselves profit from the videos and the customer data that is generated through video views.

Now, after a year of strong growth on the back of the bigger boom in online video from COVID-19, the New York-based company is announcing a big funding round — $100 million — to expand its tech, and to be where it believes video is going next.

The capital is coming from a single investor, LLR Partners, and while the JW Player’s valuation is not being disclosed, we understand it’s not quite yet at $1 billion, but fast approaching it. It comes on the heels of the company charting some massive growth, despite being a relatively quiet player in the industry.

Dave Otten, the CEO and co-founder of the company (which is named after another co-founder, Jeroen Wijering, who developed the initial technology), told TechCrunch in an interview that the company’s video streaming traffic increased by nearly 200% over the last year, with live-streaming growing 400% in that period.

There are now over 600,000 applications and sites running video powered by JW Player, with about 10,000 of those premium users; the rest use its software for free, Otten said.

This is enough of a balance that the company has been profitable for a number of years, he said. Some of the many customers using its tools include Sesame Street, TIME, Hearst, Insider, IMDb and the Chelsea Football Club. 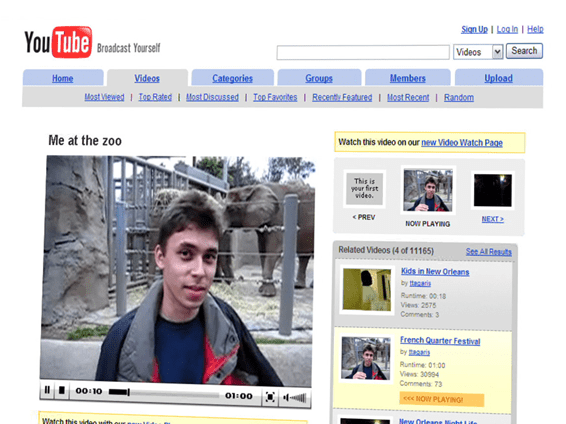 It’s a long way from JW’s early days powering YouTube — screenshot of how it looked above — but contrary to so many examples of early movers being some of the slowest to innovate later on, JW is hoping that the fact that it was a first mover in video does not mean it will be the last to anticipate what is coming in the future.

The current product challenge for JW Player mirrors that of its customers: monetization.

Just as companies have increasingly started to create paywalls around their written content, they are looking to do the same for their video catalogues, too, and JW Player wants to be their partner for this. That will include more investments into subscription services, as well as a a new set of tools for personalizing videos and providing advertising opportunities by way of the extensive data that it has amassed and continues to gather about video usage.

The company has a strong card to play in its hand for the latter business: Those who use the free version of JW Player “pay” the company by way of helping it gather lots of insights into how videos are watched.

Another area that the company will be doing more is in the area of live and on-demand video. In May, it acquired Vualto, a U.K.-based specialist in these areas that also builds DRM solutions, which it has already integrated into its platform.

Video now accounts for a whopping 80% of all online traffic, with people typically spending more than two hours a day watching it. While some of that is inevitably going to big platforms like YouTube, Facebook, Instagram, TikTok and Snapchat, there remains a big opportunity for others, aided by the likes of JW, to carve out spaces for themselves in the mix.

“JW Player has been at the forefront of digital video innovation ever since founder Jeroen Wijering created YouTube’s original video player in 2008. Today, the company offers the most comprehensive technology, advertising and data analytics platform in the digital video ecosystem,” said David Reuter, Partner at LLR Partners, in a statement. “We look forward to partnering with the JW Player team as they expand their platform and continue to elevate the way brands can host, stream and monetize video.”