Happs, an app that lets creators stream live video simultaneously across social platforms, has raised $4.7 million in a post-seed round. The product originally began as a platform for independent journalists, but expanded its mission last year to offer tools to all online creators while connecting them through a new social network.

The funding was led by Bullpen Capital and Crosslink, Goodwater, Corazon, Rob Hayes of First Round Capital and Bangaly Kaba, previously at Instagram and Sequoia, also participated.

What sets Happs apart from some established competitors in the space is the team’s desire to not only build tools that help video creators produce professional-looking online streams, but to cultivate a kind of meta-community that brings people together from across other social media sites.

“We kind of view this as the essence of what the creator economy is all about,” Happs CEO Mark Goldman told TechCrunch. “The idea of locking creators into an individual platform is a very traditional way of thinking about content creation.” 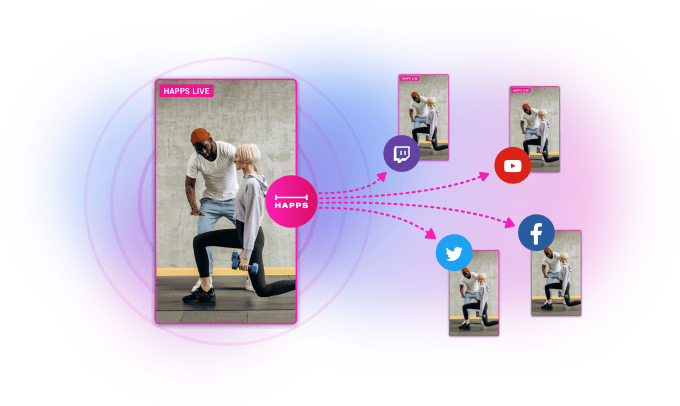 Like Goldman, the other co-founders, David Neuman and Drew Shepard, come from the media world. Goldman was the founding COO of Current TV, an experimental TV channel that dabbled in user-generated content and eventually sold to Al Jazeera in 2013.

“The whole idea was to democratize media and open it up,” Goldman said of his time working on Current TV, which he connects directly to his interest in building Happs. “[We] loved the creativity unleashed by that.”

Online creators tend to be siloed within the app where they’ve built the biggest community, but Happs wants to empower them to reach as many followers as possible in a platform-agnostic way. For creators, the appeal with multistreaming is maximizing reach while making content efficiently. There’s a risk of alienating YouTube followers at the expense of your Twitch community if you don’t play your cards right, but some savvy content creators have turned toward the model to grow their audiences.

Happs connects people across platforms in a few ways. For one, Happs users can broadcast live to Facebook, YouTube, Twitter and Twitch simultaneously. The app also collects live comments from all supported social media sites and beams them into its own interface where they appear in a continuous cross-platform stream.

The integrated comment feature is nice built-in option for anyone who’s straddled comments across multiple devices simultaneously while livestreaming, which is no easy feat. When you’re streaming live you can feature a comment so that followers can see it on the screen no matter what platform they’re watching on.

Other companies in the space like OBS, Streamlabs and Restream are focused on the tools part of the equation, offering power users a useful backend for pushing out multi-streamed live video. Streamyard also offers multistreaming to Facebook, YouTube, Twitter and other platforms through a simple browser interface.

Unlike those services, Happs feels more like a social network, with familiar features like user profile photos, follower counts and a feed next to a “go live” button. Anyone can use the multi-streaming platform through its iOS or Android apps or a web interface, whether they’re a creator signing up for the tools or a fan looking to support the content they love.

Happs lacks some of its competitors’ bells and whistles, stuff like fancy customized graphics and lower-thirds, but has a few interesting tricks of its own. While streaming live on Happs, you can invite someone else on the app to join your feed for a real-time collaboration. The social networking elements are meant to encourage cross-platform creativity, so a YouTuber and a Twitch personality could hang out together and boost both of their reaches, all while streaming to a bunch of other apps.

Happs also offers users monetization tools from the get-go, with no requirements before they can start making money. That speaks to the app’s appeal for creators who might be less established or just starting out. Happs could be a much harder sell for a popular creator deeply invested in a platform like Twitch, which has rules against multi-streaming for most accounts that are allowed to monetize.

There are a few different ways to monetize. One lets anyone on Happs sponsor a broadcaster through regular monthly payments. The other is a one-off option that lets you chip in an award for any livestream, or to the VOD (video on demand) after the fact. The in-app currency is a virtual coin that users can buy or earn through doing stuff on the app. There are no plans for ads (yet, anyway).

The company will take 30% cut of subscription earnings, though according to Goldman they’ll be waiving those fees for an unspecified period of time to attract people to the platform.

“We raised this round to really build up product and tech team [and] to make the platform much more stable and reliable,” Goldman said. The company is looking forward to leveraging the new resources to “really go out now and get in front of creators so they know Happs exists.”