Few spaces have grown hotter in the past year than the creator economy has, but for all of the new tools available to those starting a podcast, newsletter or storefront, most players have been more focused on building out their own platform opportunity rather than selling full independence to creators.

Spore wants to transform the creator web experience into a Shopify-like basket of tools that users tap into to connect with their audience across a variety of mediums. Spore CEO Austin Hallock is looking to compete with other creator giants for the “link in bio” real estate on social media sites with a white-label option that uses a creator’s own URL, selling an easy-to-build hub focused solely on connecting personalities with their fans.

With Spore, users can manage their audience, communicate with them and analyze what is and isn’t working.

The platform allows for blasting out newsletter updates, podcasts or texts while embedding functionality like storefronts or Discord-like chat feeds into their sites to keep the interactions going 24/7. Creators can also use the tool to convert free subscribers to paying ones, managing the payments flow while also building flows to allow creators to send certain content to their paying fans.

The small startup has raised a $1 million pre-seed round led by SignalFire with additional participation from Justin Kan & Robin Chan’s GOAT, Canaan, Lenny Rachitsky, Nathan Baschez, Justin Waldron and Dave Nemetz, among others. 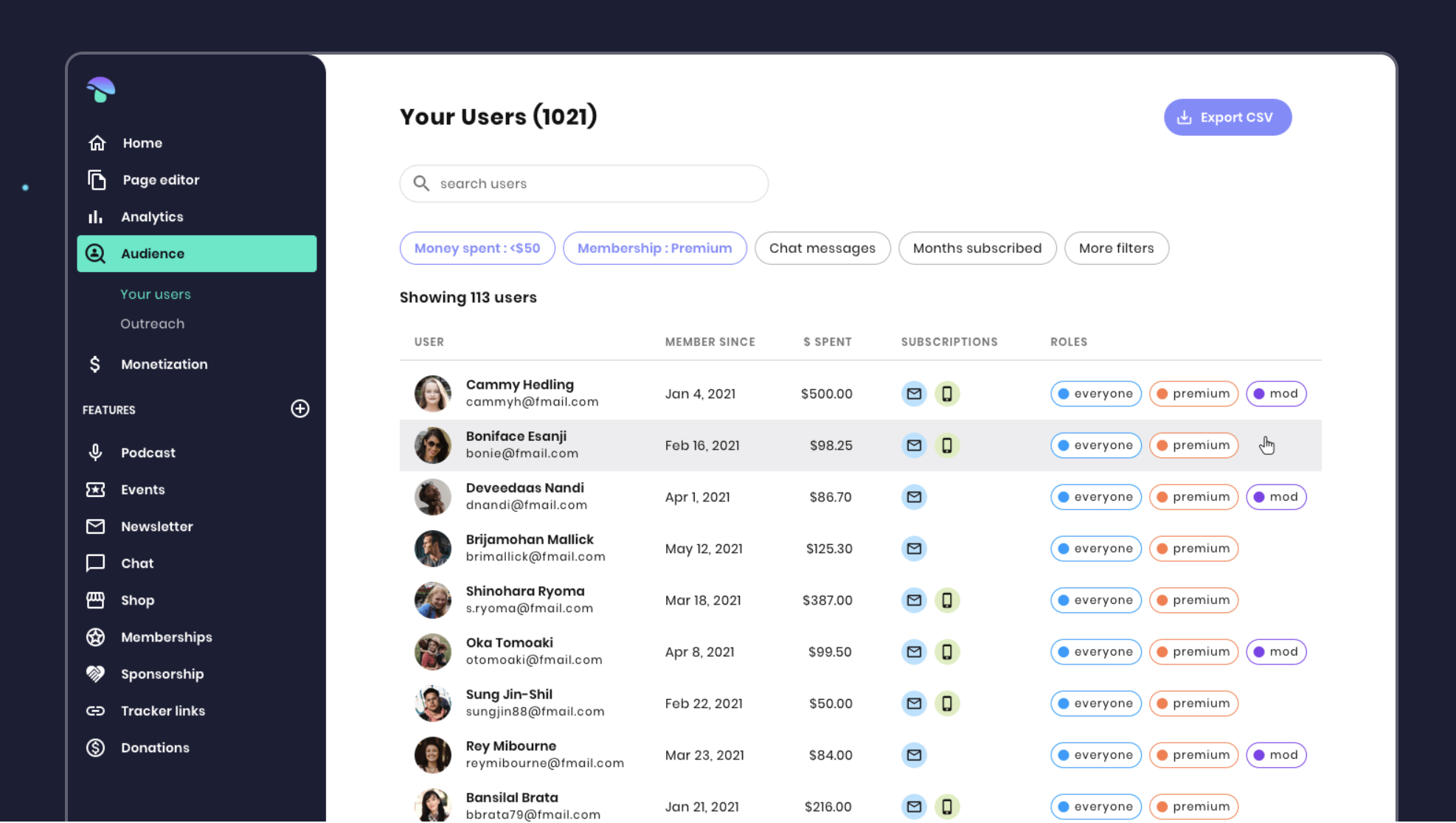 It’s the first lead investment for former TechCrunch editor Josh Constine in his role at SignalFire (full disclosure: I used to work closely with Josh). Constine started using Spore to build out a site for his regular show on Clubhouse, fellow investor Justin Kan also grew familiar with the team by building out a website for his podcast and YouTube channel.

“I chose Spore as my first lead investment as a VC because it solves creators’ biggest problems by giving them their own white-labeled website they control, and combining all the best content, communication, analytics, and payment tools so creators can spend their time making art instead of being web developers,” Constine tells TechCrunch.

Spore is certainly a small-scale operation at the moment with four full-time employees, though they’re hoping to grow their team with this raise. All of these features are in their early MVP stages, but Hallock wants his company to continue building out its utility to creators so that they can build a direct connection with their fans, one that isn’t obfuscated by algorithms..

“We definitely want to give creators ownership,” Hallock tells TechCrunch. “Today, you’re promoting your Linktree page or Patreon rather than just promoting your own brand… We don’t want it to be about Spore.”