The world seems to move faster every year, and yet, nothing feels slower than the speed by which paychecks get distributed. In the United States, work conducted the day after a pay period will take two weeks just to process, with a check or direct deposit coming another week or two later. For the tens of millions of employees who live paycheck-to-paycheck, that multi-week delay can be the difference of making a rent check — or not.

A variety of startups have approached this problem with different solutions, and one of the newest and most compelling offerings is Clair.

Using its own base of capital, New York City-based Clair offers instant — and most importantly — free earned wage advances to workers by integrating into existing HR technology platforms. It works with full-time employees and also gig workers, and it offers a suite of online and mobile apps for workers to make sense of their finances and ask for an earned wage advance.

The company was founded in late 2019 by CEO Nico Simko, COO Alex Kostecki and CPO Erich Nussbaumer, and today, the company announced that it raised $15 million in Series A funding led by Kareem Zaki of Thrive Capital, who will join the company’s board of directors. Just a few months ago, Clair had announced a $4.5 million seed round led by Upfront Ventures, bringing its total funding to $19.5 million.

“Pay advance” or “earned wage advance” (there is a slight distinction) have been the Silicon Valley euphemism for payday loan, an industry that has been plagued with allegations of fraud, deceit and rapacious greed that have bilked workers out of their hard-earned paychecks through usurious interest rates.

What sets Clair apart is that its offering is free to workers. Since it connects directly into HR systems, the startup takes on significantly less financial risk than traditional payday lenders, who don’t have access to the payroll data that Clair is able to analyze.

For Simko, one of his goals is simply to see the elimination of the traditional industry entirely. “I have a payday lender just in front of my apartment in Brooklyn and there is a long line on the 25th of every month, and I am not going to stop until that line disappears,” he said. “Success for us is just to become the winner in earned wage access.”

He is Argentine-Swiss, and came to the States to attend Harvard, where he met Nussbaumer. He ended up working at J.P. Morgan focused on the payments market. He stayed in touch with Kostecki, their families are good friends, and the trio decided to go after this problem, partly inspired by Uber’s instant pay feature that it introduced in 2016 and which proved wildly successful. 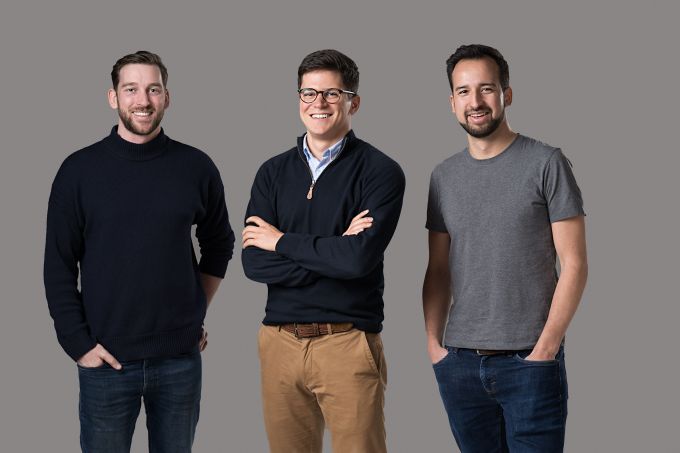 Instead of making money on interest rates, fees or tips, Clair instead wants to be the bank and financial service provider of choice for workers. As I noted last week about Pinwheel, an API platform for payroll, owning the direct deposit relationship with a worker all but guarantees they will conduct the vast majority of their financial transactions through that particular bank account.

Clair offers free instant pay advances as a gateway to its other offerings, which include spending and savings accounts, a debit card, a virtual in-app debit card and financial planning tools. Simko said, “Our business model is to give earned wage access free for people and then sign them up automatically for a digital bank, and then we make money the same way Chime makes money, which is interchange fees.”

In fact, he and the company believe in that model so much, it will actually pay human capital technology platforms like workforce management and payroll systems to integrate with Clair as an inducement. It offers a recurring revenue fee stream for HR tools based on the number of users who join Clair, regardless of how much those workers use the software. We are “really going down the thesis of embedded fintech,” Simko said. “Employees start spending money on their Clair card, and we distribute that back to our [HR tech] partners.”

Clair joins a number of other companies in this space, which is becoming ever more heated as the perceived opportunity in financial services remains high among investors. Last year, payroll platform Gusto announced that it would expand from purely payroll to a financial wellness platform, which is partially based on its instant earned wage advances or what it dubs Cashout. We’ve covered Even, which is one of the originals in this space with a major partnership with Walmart, as well as neobank Dave, which offers pay advance features with a tipping revenue model. Dave just announced a $4 billion valued SPAC with VPC Impact Acquisition Holdings III.

Nonetheless, Clair’s angle is differentiated as the race to lock in every person globally with new financial services heats up. Simko says he sees a gargantuan opportunity to be the “Alipay” of the United States, noting that unlike China with Alipay, Nubank in Brazil and increasingly Latin America, and N26 and Revolut in Europe, there is still an opportunity for a comprehensive neobank to take over the U.S. market.

With the new funding, the company will continue to expand its product offerings, exploring areas like healthcare and debt repayment. “I can give APR not based on their credit score but on their employer’s credit score, which is the multibillion-dollar idea here,” Simko said. The team is nominally hubbed in New York, with roughly half of the 25 or so person team.