The working class of the United States doesn’t get many breaks these days. It’s not just a function of low pay and long hours, but also the incredible uncertainty of income and expenses that makes surviving week-to-week so challenging. One in five Americans have a negative net wealth, even in an economy where the unemployment rate is the lowest in almost two decades. Banks, meanwhile, are actively dissuading the working class from banking with them, creating a permanent class of unbanked and underbanked citizens.

For Jon Schlossberg, CEO and co-founder of Even.com, improving the plight of ordinary Americans and their finances is a deeply personal and professional mission. And now that mission has a huge new bucket of capital behind it, with Keith Rabois of Khosla Ventures leading a $40 million Series B round into the Oakland-based startup. Rabois is a return investor, having previously backed the company in its late 2014 seed round. With this latest round of capital, Even.com has now raised $50.5 million.

When Even.com first launched its eponymous app, the goal was to offer income smoothing for workers, helping them avoid usurious payday loans to make ends meet. Since that first launch several years ago, Schlossberg and his team learned that the only way to improve the finances for the working class is to help them budget better — ending the need for loans in the first place. “To do anything with your life, unless you are just born to the right family, you need to spend your money wisely, but we never teach you how to do that,” Schlossberg explained to me.

Last year, Even.com announced that it had stopped evening through its Pay Protection product. Instead, Schlossberg said that Even.com has evolved and wanted to “build a new kind of financial institution with products that fit your life.” It still has a feature it brands as Instapay, which allows users to request their earned pay in advance of their payday.

But Even.com is increasingly focused on improving the quality of its intelligent budgeting feature. Using artificial intelligence models honed over the past few years, the company now gives users of its Even app an “Okay to spend” figure that helps them think through their cash flow. By giving a predictive figure rather than a checking account balance, Even can help its users avoid sudden surprise expenses that can trigger the kind of financial death spiral that has become a familiar story in America. The company will also soon launch an automatic savings feature similar to Digit or Acorns that helps people build up regular savings. 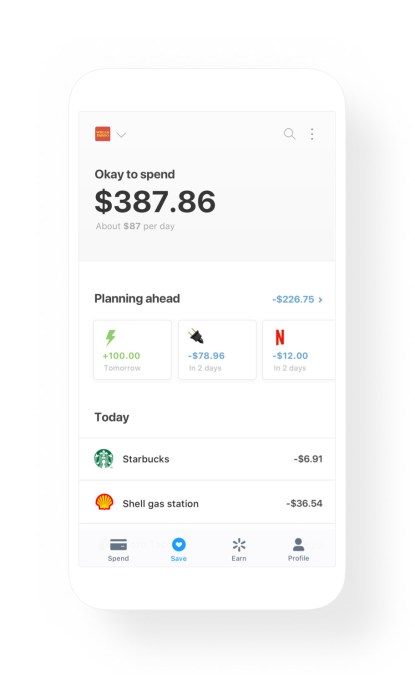 While the company offers an increasingly comprehensive suite of financial tools, it has decided to avoid charging users specific use fees, opting instead for a subscription model. Schlossberg explained that “We are a mission-oriented company, but talk is cheap and where the rubber hits the road, it’s how you make money.” Even is free for users participating through partner employers, or $2.99 a month for individuals without a sponsor.

The company’s highest expense feature is Instapay due to underwriting, and so the company makes higher profits when fewer of its customers need access to payday credit. In other words, the better that its users budget, the fewer loans it will underwrite, and the more money the company makes. We are “directly incentivized to help people with their financial health,” Schlossberg noted.

Even has proven attractive to corporate customers, including Walmart, which partnered with the startup last December to offer its service to all 1.4 million employees at the retailer. Since the launch of that partnership, more than 200,000 Walmart employees regularly use the app, according to Even, and the typical active user checks their Okay to spend balance four times a week. A majority of active users have also taken out an Instapay through Even.

More interestingly, salaried employees at Walmart used the app slightly more than hourly workers, proving that just having a guaranteed income isn’t necessarily a panacea to financial trouble for many American households.

Even.com’s Series B round is all about expansion and growth for the company. Even intends to open an East Coast office this year, and intends to expand its product further into the Fortune 500 with partnerships similar to its Walmart deal. The company currently has 37 employees. In addition to Khosla, the startup raised funding from Valar Ventures, Allen & Company, Harrison Metal, SV Angel, Silicon Valley Bank and others.