Few things have captured Silicon Valley-based investors’ attention in recent years quite like the quest to back the successor(s) to Google Docs. The estimable and entrenched productivity suite has been unbundled and repackaged into products that a number of multibillion-dollar tech startups have been built around.

All the while, entrepreneurs are continuing to poke holes in their predecessors’ lore, creating something faster, sleeker or more intuitive. For plenty of the current generation productivity startups, the journey to replace Google Docs and Microsoft Office got a historic shot in the arm this past year as a pandemic gave remote work software companies a jolt of attention.

“COVID has made everybody realize that the way that we were working had to change,” Almanac CEO Adam Nathan told TechCrunch. “The core tools we used for productivity, Microsoft Word and Google Docs, were for when we did a completely different type of work.”

Almanac is trying to revamp the document editor in a package that’s quicker than products like Notion and far more intuitive than legacy software suites, Nathan says. Last year, the startup raised a $9 million seed round led by Floodgate and has been quietly building out its network of users in early access beta. 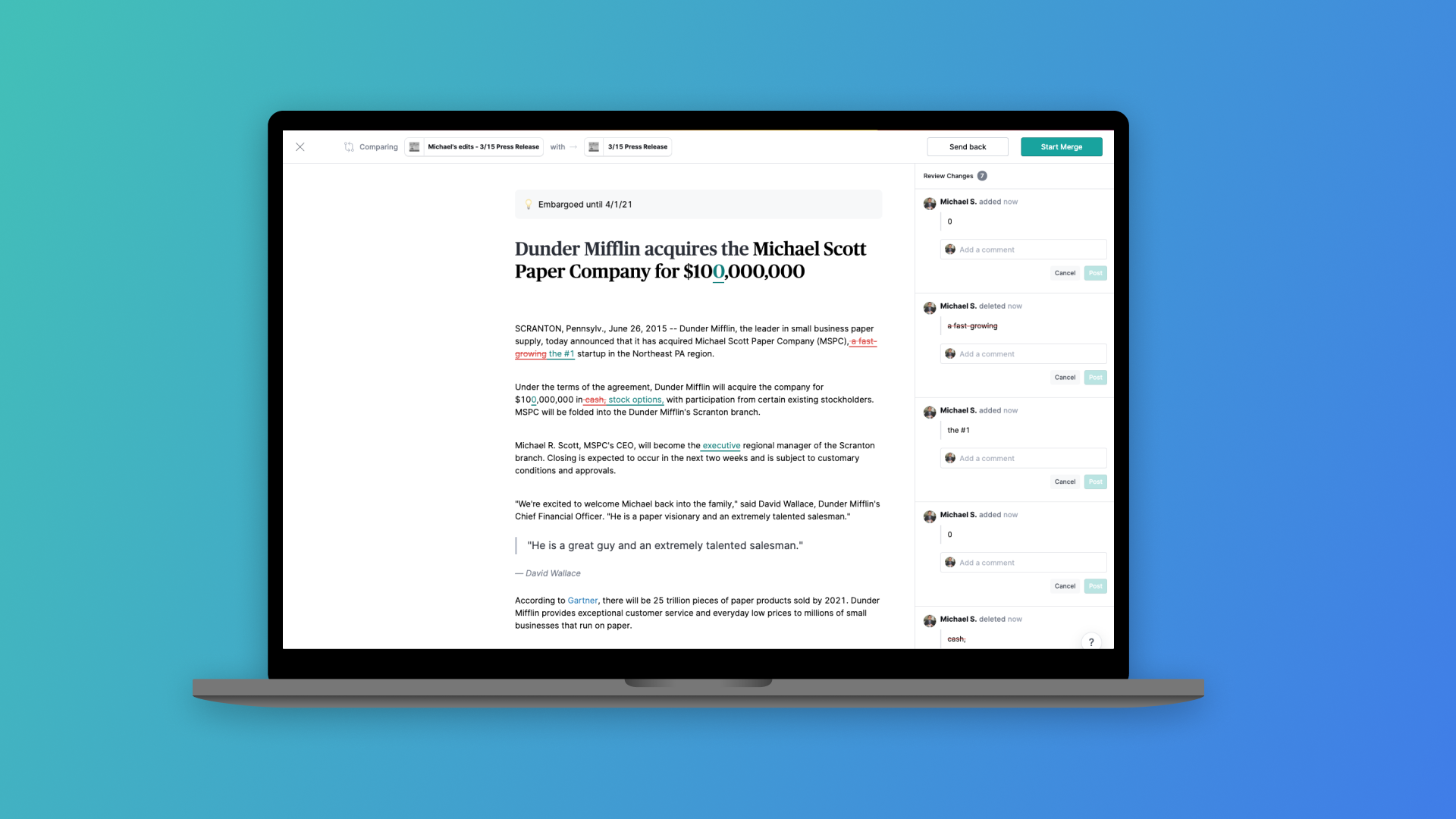 The document editor found its way into a diverse number of offices outside tech startups — from a Domino’s branch to a veterinary office — through its open-source template library Core, a hub for user-submitted guides on everything from how to run a one-on-one meeting to how to structure salaries for your customer-service team. There are 5,000 documents on Core that are accessible to any logged-in user, something that has been a sizable customer channel for the startup as more companies and offices across the country have begun to question some entrenched ways of doing things.

“There are way more people working in docs outside of Silicon Valley than in it,” Nathan says.

As a document editor, Almanac’s core offering is the ability to keep files organized in the way that companies actually organize themselves.

One of its hallmark features is the ability to track document changes in a way that makes Google Docs look completely unintelligible. Users can easily make their own copies of documents, merge them with the original and quickly approve changes. Users can also get approval from their manager or another user in their network and ask for feedback along the way.

For tasks that require a bit more thought, people can use Almanac to add tasks to another user’s to-do list inside the documents themselves, a feature that they might have needed a project management tool like Asana to handle in the past. Updates for items a user has been assigned or has assigned to others live inside their own inbox where notifications flow automatically as documents evolve. The team believes that functionality like this inside Almanac will help teams cut down on unnecessary Slacking and let the documents speak for themselves.

This week we shipped a feature that makes writing in Almanac even faster: snippets. 🚀

Snippets enable you to save content (or whole docs) and easily reinsert them into a doc. 👇 pic.twitter.com/YvmHBZM7dG

The company is quickly iterating itself into new workflows — they recently launched a feature specifically around building and updating handbooks, and they also just shipped a feature called Snippets, which allows users to save oft-used blocks of texts so they can quickly build up new documents.

In a crowded productivity software space, Almanac’s sell relies on users fully committing to the offering; that’s been a central struggle in the post-Microsoft Office era, when users have often seen their productivity toolsets swell with tools claiming to cut down on confusion. This often isn’t the fault of the tools themselves, but with how organizations adopt new software. Almanac hopes that by focusing on common workflows inside documents, its users can resist the urge to open another app and instead realize the gains that come from centralizing feedback in one platform.