Chrome, at least in its experimental Canary version on Android (and only for users in the U.S.), is getting an interesting update in the coming weeks that brings back RSS, the once-popular format for getting updates from all the sites you love in Google Reader and similar services.

In Chrome, users will soon see a “Follow” feature for sites that support RSS and the browser’s New Tab page will get what is essentially a (very) basic RSS reader — I guess you could almost call it a “Google Reader.”

Now we’re not talking about a full-blown RSS reader here. The New Tab page will show you updates from the sites you follow in chronological order, but it doesn’t look like you can easily switch between feeds, for example. It’s a start, though. 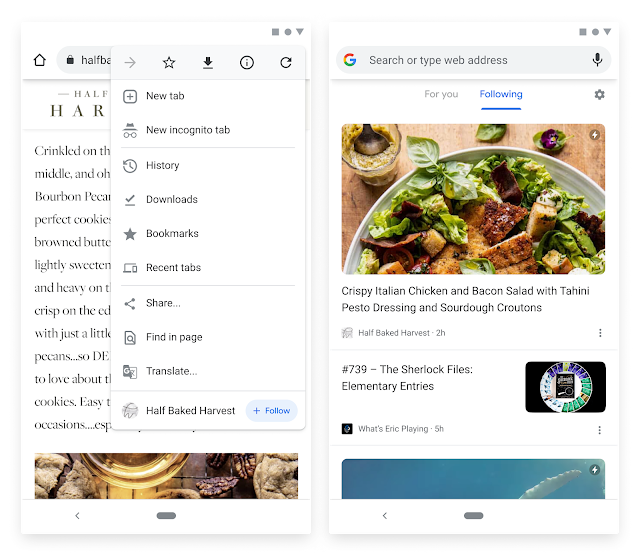 “Today, people have many ways to keep up with their favorite websites, including subscribing to mailing lists, notifications and RSS. It’s a lot for any one person to manage, so we’re exploring how to simplify the experience of getting the latest and greatest from your favorite sites directly in Chrome, building on the open RSS web standard,” Janice Wong, product manager, Google Chrome, writes in today’s update. “Our vision is to help people build a direct connection with their favorite publishers and creators on the web.”

A Google spokesperson told me that the way the company has implemented this is to have Google crawl RSS feeds “more frequently to ensure Chrome will be able to deliver the latest and greatest content to users in the Following section on the New Tab page.”

RSS was one of the fundamental technologies of the Web 2.0 era. Even today, it’s still the easiest way to get timely updates from your favorite sites (though some may not offer feeds anymore) without any recommendation algorithms getting in your way. Yet while RSS was always extremely useful, the user experience wasn’t always ideal, though services like Google Reader (RIP) and Feedly did a lot to make it simple enough to subscribe to feeds and get updates. But when Google offered Google Reader at the altar of Google+ back in 2013, that era came to an end, even as diehard news junkies kept holding on to their Feedly accounts and old copies of NetNewsWire.

I think a lot of people will be glad to see that Google is bringing it back as a core feature of its browser. If you prefer an open web, RSS, for all its occasional clumsiness, is the way to go.

For now, though, this is only an experiment. Google says it wants to gather feedback from “publishers, bloggers, creators, and citizens of the open web” as it aims to build “deeper engagement between users and web publishers in Chrome.” Hopefully, it won’t stay this way.