The Kia EV6, an all-electric crossover that kicks off the automaker’s Plan S strategy to shift away from internal combustion engines and toward EVs, will come to the U.S. early next year, the company said Tuesday evening during a livestreamed event in New York.

The EV6 is the first dedicated battery-electric vehicle to be built on its new Electric-Global Modular Platform, a platform that is shared with Hyundai and Genesis as part of the Hyundai Motor Group. The EGM-platform is the underlying foundation of the new Hyundai Ioniq 5 compact crossover. And it’s one of 11 electric vehicles that Kia plans to deliver globally by 2026.

Kia said its new dedicated battery electric vehicles will all start with the “EV” prefix. A number will follow “EV” to indicate the vehicle’s position in the lineup. That puts the EV6 somewhere in the middle of its upcoming lineup.

While the global debut held earlier this year provided many of the details, a few new nuggets of information were shared, including that customers can make reservations for 1,500 first edition versions of the EV6 beginning June 3. The automaker has not revealed pricing for any of the vehicle trims.

The EV6 First Edition will be similar to the base model with lots of techie add-ons, including an augmented reality head-up display, remote smart parking assist feature, 14-speaker Meridian audio system and a two-year subscription to SiriusXM. There will be notable mechanical and exterior differences as well, including a wide sunroof, 20-inch wheels, dual-motor AWD and a 77.4 kWh battery. 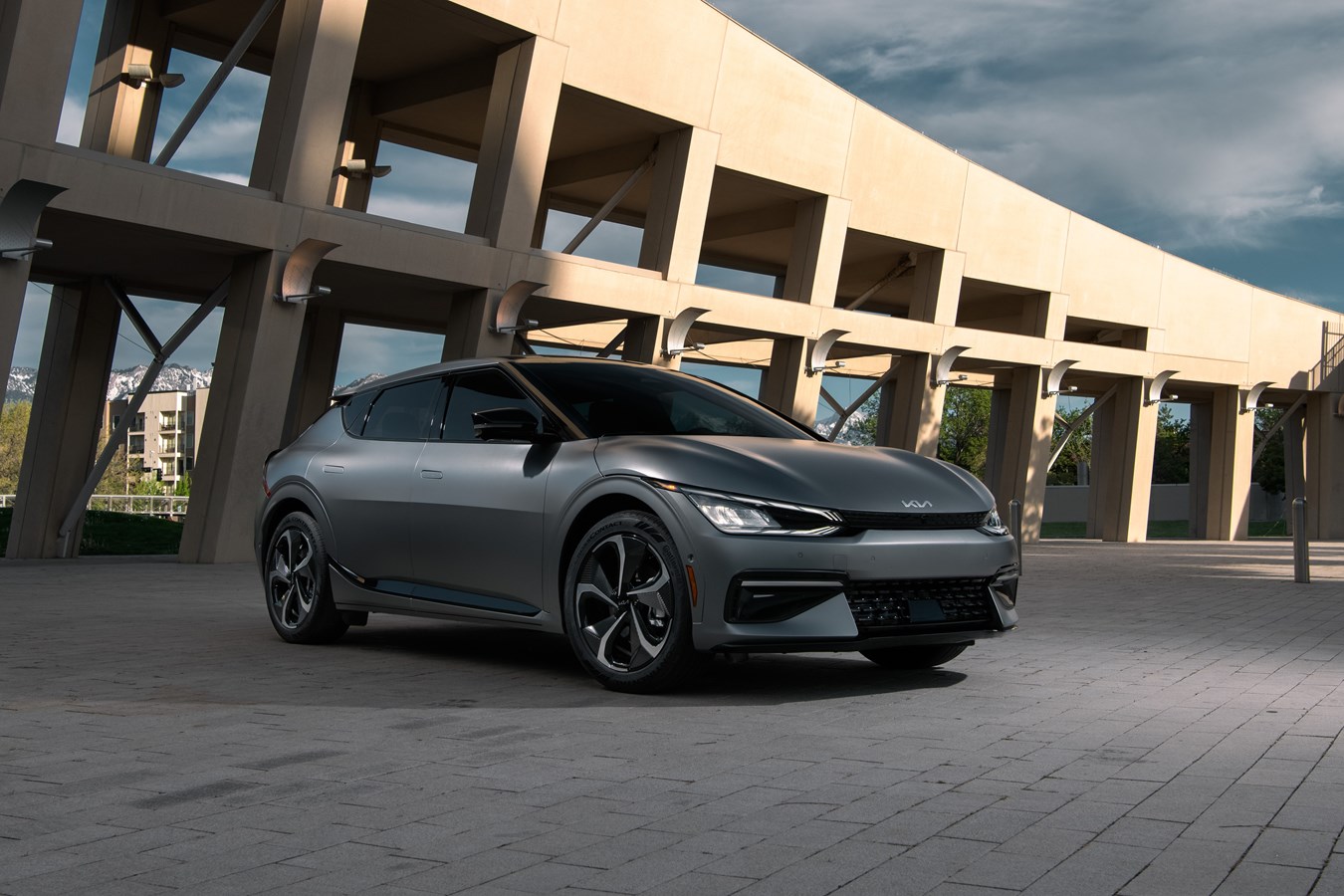 Kia designed the EV6 to look and perform like a roomy sports car. The four-door crossover has a low front end that moves up into a roofline, giving it coupe-like profile. The LED headlights have a segmented pattern and the traditional grille found on internal combustion engine vehicles is gone.

The EV6 has the same 114.2-inch wheelbase as the Kia Telluride, which gives some sense of its size.

The Kia EV6 will come with two Nickel-Cobalt-Manganese battery pack options — a 58 kWh or 77.4 kWh — with the larger one providing a targeted range of 300 miles. The vehicle is offered in both rear-wheel and AWD, which depending on the electric motor and battery configuration delivers between 167 and 313 horsepower. The EV6 GT, an AWD model that comes with the larger battery and powerful front and rear electric motors, delivers 567 horsepower. The GT model, which won’t be available until late 2022, can travel from 0 to 60 mph in less than 3.5 seconds.

Perhaps more importantly, is that the vehicle supports 400-volt and 800-volt DC charging. Kia claims that 800v DC fast charging from a 350-kW charger can add up to 210 miles to the battery in under 18 minutes.

Kia loaded up on various charging features. The EV6 has an onboard 11 kW charger for Level 2 charging that will power up the battery in about seven hours. There’s also what Kia calls vehicle-to-load functionality, which is jargony way of saying the EV6 can be a power source for appliances, tools and devices like a computer. It works by taking electricity from the battery to a charging control unit, which provides 1900 watts of power.

The user is able to plug into that power via a 100V outlet located in a socket on front of second row seat base. If the battery is fully charged, Kia says power can be drawn from the vehicle for 36 or more consecutive hours. It can also be used to charge vehicle-to-vehicle, albeit at 1.1 kW, which is a glacial pace that is equivalent to a 110V charger. 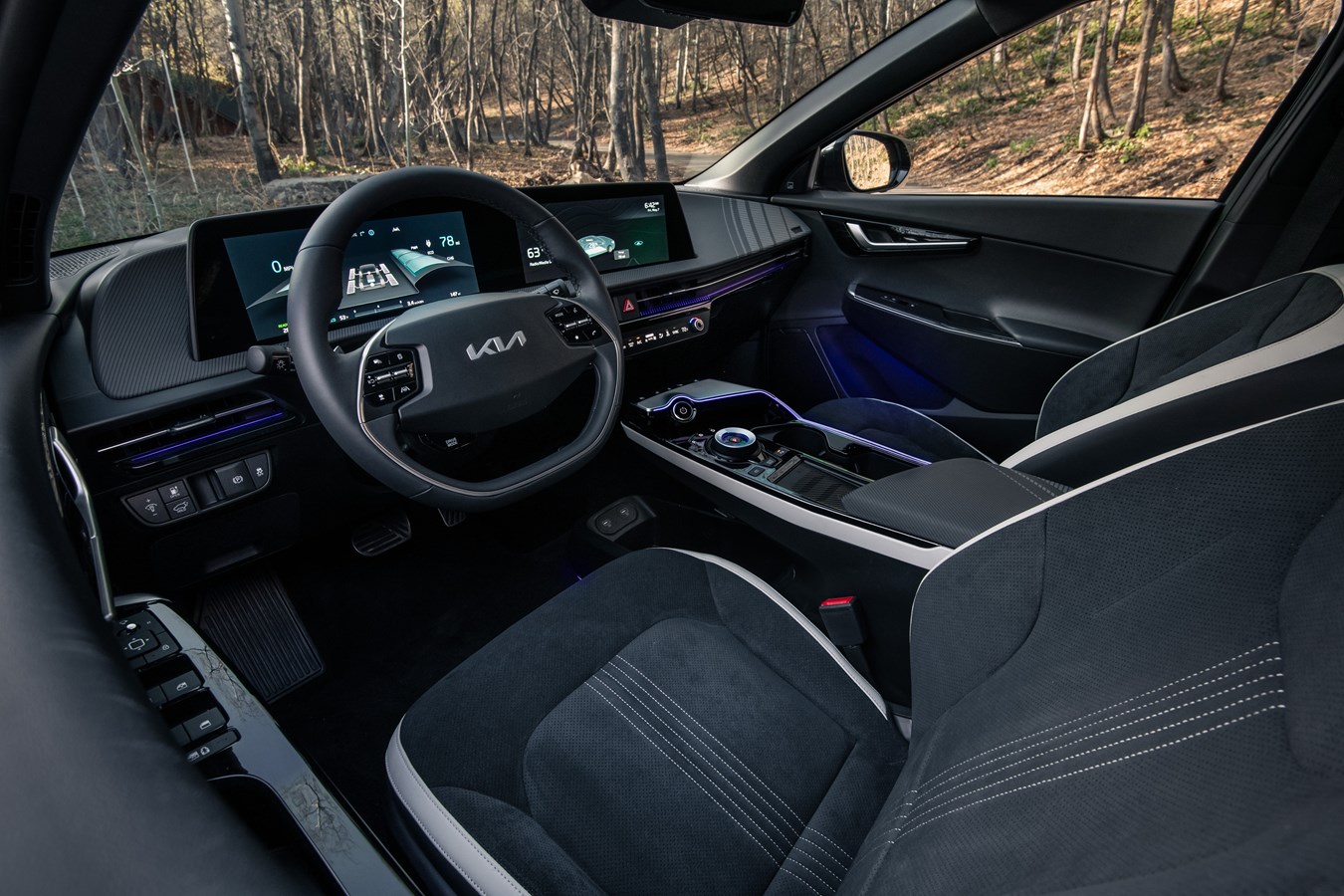 There are numerous other driver assistance, safety and in-car tech features as well. Inside the vehicle are two 12-inch screens that form a curved display and house the instrument cluster and infotainment center. There is Bluetooth functionality and wireless smartphone charging, which has become standard fare in modern vehicles.

For an extra fee, customers can add on a Wi-FI hotspot and the ability to update the maps and infotainment system software wirelessly. Other features include an in-car commerce feature called Kia Pay, a stolen vehicle recovery tracker, smartwatch accessibility that provides battery status, vehicle notifications and certain vehicle control through Apple and Android smartwatches and connected car functions for weather and routing.

Customers are also able to use Amazon Alexa or Google Assistant through a smart speaker integration to remotely control vehicle functions such as remote start.

Four cameras outside of the vehicle give a 360-degree view and help detect obstructions while parking along with several other safety features including a safe exit assist that alerts the driver or passengers opening the door to not exit if the system spots approaching traffic.

There is also 21 standard active advanced driver-assistance systems including a feature that keeps a set distance from a car in front and centers the EV6 in the lane. A newer version of this feature will be able to assist with lane changes and adjust the lateral position of the car within the lane, according to Kia.