It’s the golden age of collectibles and legacy institutions are looking to move beyond trading cards, embracing new tech that brings the fandom together online. Sequoia Games, a new game studio launching out of stealth, is aiming for a hit with its tabletop AR game that’s looking to find an audience in a post-Top Shot world.

With a game that seems to be trading cards meets Catan meets NFTs meets augmented reality, Flex NBA is aiming to capture some of the magic that Dapper Labs did with NBA Top Shot, albeit with a title reliant on physical collectibles and a tabletop game.

Collectibles are incredibly hot right now and while there’s been a lot of attention on digital-only collectibles, Sequoia Games’ hybrid approach is probably one that will likely find some new audience segments. The game is centered around these hexagonal discs that function like trading cards but can be tracked inside its mobile app with 3D animations of the players superimposed on top of them. With mechanics similar to other popular trading card games, users can augment those tiles with power-up tiles.

Users get a handful of tiles that vary depending on the tier of their Kickstarter pledge, but going forward, the startup is planning to sell the tiles in randomized packs as well. 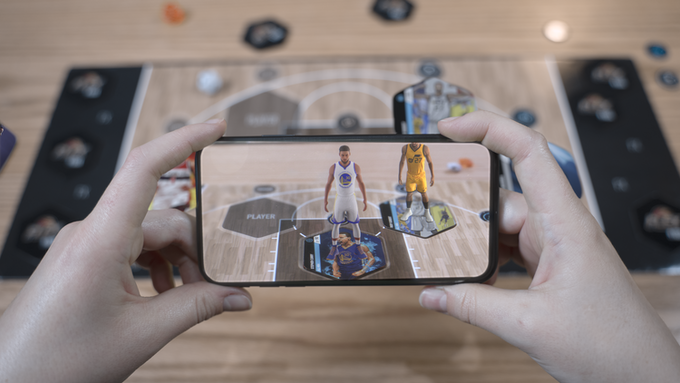 Users register these tiles inside their app, where the ownership of individual tiles is tracked across the network using something that sounds an awful lot like a blockchain — though that’s a word the team was very careful to avoid using. What’s interesting is that once the tiles are registered, users can play the game in-person or online. The company is working on a first-party marketplace for the tiles, though buyers will have to actually purchase and ship the physical tiles even if they are only playing on mobile.

Like Top Shot, Sequoia Games boasts an official partnership with the NBA and national players’ association. Unlike Dapper Labs, they’re not currently sitting on hundreds of millions of dollars of venture money. The startup’s founder says they’ve raised a modest seed round and are in the process of closing a more sizable Series A.

Also unlike Top Shot, which can — and has been able to — rapidly adjust supply of new moments to meet demand, Sequoia Games is stuck in the physical world and is thus a little more supply-confined — one of the reasons they’ve chosen to do a Kickstarter to gauge interest from potential users early-on.

Prices for the tiers of Kickstarter tiers vary pretty wildly, with a $35 basic pack that includes the most common tiles and a $699 “Supreme Flex Domination Pack” that boasts rarer items like MVP-level player tiles. The startup plans to start shipping out packs in July.