Venmo is adding support for cryptocurrency, starting today. The company says it will begin to roll out the ability for Venmo’s more than 70 million users to buy, hold and sell cryptocurrencies directly in the app, similar to the support Venmo parent company PayPal added late last year. Initially, Venmo will support four types of cryptocurrency: Bitcoin, Ethereum, Litecoin and Bitcoin Cash — the same that PayPal offers its U.S. users.

The company had already announced its plans to introduce cryptocurrency on Venmo in 2021. Both Venmo and PayPal support for crypto come by way of a partnership with Paxos Trust Company, a regulated provider of cryptocurrency products and services.

Though there isn’t much differentiation between what both PayPal and Venmo offers users today, the company explains that the move is more about getting cryptocurrencies in front of a separate, and arguably younger, audience. 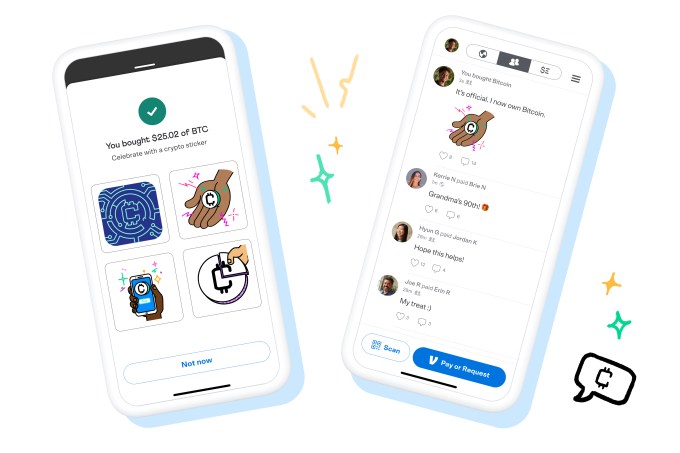 “While there is some overlap between the bases, there are also a lot of customers who are discretely either PayPal or Venmo users,” explains Darrell Esch, Venmo general manager and SVP. “So this ultimately gives us a new group of customers who aren’t using PayPal day in and day out the ability to access [crypto] through Venmo.”

He says that Venmo skews younger, with more of its users in their 20s and 30s, compared with the overall U.S. population. They also have other traits that might make them receptive to investing in cryptocurrencies. For example, they’re more likely than the overall U.S. population to have a college degree, they’re solidly middle-income earners and they skew toward digital natives.

The user base has also already begun purchasing crypto, Venmo notes. More than 30% had purchased crypto or equities, according to a 2020 Venmo customer study. This picked up during the pandemic, as well.

At launch, Venmo will leverage its in-app social feed to spread the word about cryptocurrencies. Users can share their crypto transactions to the feed, if they choose. This will raise awareness and engagement with the idea of crypto, as will Venmo’s new educational features. The company says it plans to publish access guides and videos inside the app that will help to answer some of the common questions about cryptocurrencies for those who are just getting started. (See below video, for example.)

Meanwhile, although PayPal announced its U.S. customers could shop with cryptocurrencies via its supported merchant base, Venmo doesn’t immediately have a similar option. However, the company as of February rolled out to its user base a feature called Business Profiles, which enables Venmo users to transact with small sellers and merchants on its app. It’s not difficult to imagine the role that crypto could play here, as well, in the future. Venmo also offers other products, including a debit and credit card, which could also be leveraged in the future to take advantage of a crypto integration, perhaps.

But in the meantime, the only way to use crypto on Venmo is by buying, selling and holding. The company says users can start with as little as a dollar and pay via their linked bank account or debit card. Of note, the Venmo wallet doesn’t connect with that of parent company PayPal, though we understand the exchange rates will be the same.

Support for crypto on Venmo is starting to roll out today and will reach all customers within the next few weeks, Venmo says.