Catch&Release founder and CEO Analisa Goodin told me that she wants to help brands break free from the limitations of stock photography — and that her startup has raised $14 million in Series A funding to achieve that goal.

Goodin explained that the company started out as an image research firm before becoming a product-focused, venture-backed startup in 2015. The Series A was led by Accel (with participation from Cervin Ventures and other existing investors), and it brings Catch&Release’s total funding to $26 million.

Stock media and video services are moving in this direction themselves, for example by introducing their own libraries of user-generated content. Goodin applauded this, and she said Catch&Release isn’t opposed to the use of stock photos — it integrates with these stock marketplaces. At the same time, she suggested that she has a much bigger vision.

“This isn’t just about UGC, this is about tapping into the creative potential of the internet,” she said.

After all, you can now find pretty much any kind of content you can imagine somewhere online, but “a lot of advertising agencies and brands have been trained that if a piece of content comes from the internet, avoid it,” because it’s just “too hard” to figure out how to license it. (And indeed, that’s why I went with a stock photo for the lead image of this post.) 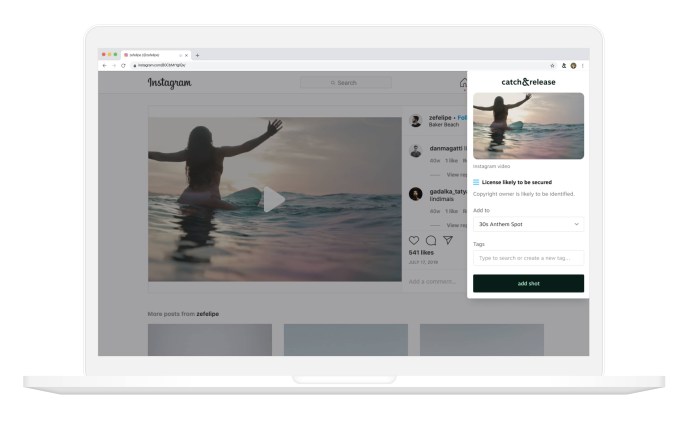 Catch&Release aims to make that process as simple as possible, first with a browser extension that allows marketers to save any media that they find on the web, anytime they think they might want to use it in their own campaigns (this is the “catch” part of the process). It even presents a “licensability score,” which is a rating based on factors like the person who posted the content, the description and the comments, indicating how likely it is that a marketer will actually be able to license this content.

Then, when someone from a brand or advertising agency decides that they want to use a piece of content, they can send a licensing request with a push of a button (this is the “release”). Catch&Releases also analyzes the content for anything else that needs to be cleared or obscured, such as a company logo.

While we’ve written about other tools for licensing online content, Goodin emphasized that Catch&Release isn’t just about finding photos for a social media campaign. Part of the goal, she said, is to erase the “stigma” around UGC, which now “represents the entire spectrum of culturally relevant content.”

For example, she showed me a Red Lobster commercial that looks like a normal TV ad, but was in fact assembled entirely from footage found online — something that’s been even more useful in the past year, with pandemic-related safety concerns around large shoots. (Catch&Release has also been used to license content for ads promoting TechCrunch’s parent company Verizon.)

Goodin added that the new funding will allow Catch&Release to continue investing in product, engineering and marketing.

Unsplash is building an ad business around branded stock photos