Josh Mendelsohn Contributor
Josh Mendelsohn is a co-founder of Hangar, and a veteran of Silicon Valley companies including Google, Sequoia Capital and Hattery. He has also served as senior tech advisor to Mike Bloomberg, focusing on helping startups and nonprofits at the intersection of tech, software and government at the federal, state and local levels.
More posts by this contributor

Building, scaling and launching new tools and products is the lifeblood of the technology sector. When we consider these concepts today, many think of Big Tech and flashy startups, known for their industry dominance or new technologies that impact our everyday lives. But long before garages and dorm rooms became decentralized hubs for these innovations, local and state governments, along with many agencies within the federal government, pioneered tech products with the goal of improving the lives of millions.

Long before garages and dorm rooms became decentralized hubs for innovation, local and state governments, along with many agencies within the federal government, pioneered tech products with the goal of improving the lives of millions.

As an industry, we’ve developed a notion that working in government, the place where the groundwork was laid for the digital assistants we use every day, is now far less appealing than working in the private sector. The immense salary differential is often cited as the overwhelming reason workers prefer to work in the private sphere.

But the hard truth is the private sector brings far more value than just higher compensation to employees. Look no further than the boom in the tech sector during the pandemic to understand why it’s so attractive. A company like Zoom, already established and successful in its own right for years, found itself in a situation where it had to serve an exponentially growing and diverse user base in a short period of time. It quickly confronted a slew of infrastructure and user experience pivots on its way to becoming a staple of work-from-home culture — and succeeded.

That innate ability to work fast to deliver for consumers and innovate at what feels like a moment’s notice is what really draws talent. Compare that to the government’s tech environment, where decreased funding and partisan oversight slow the pace of work, or, worse, can get in the way of exploring or implementing new ideas entirely.

One look (literally, see our graph below) at the trends around R&D spending in the private and government sectors also paints a clear picture of where future innovations will come from if we don’t change the equation. 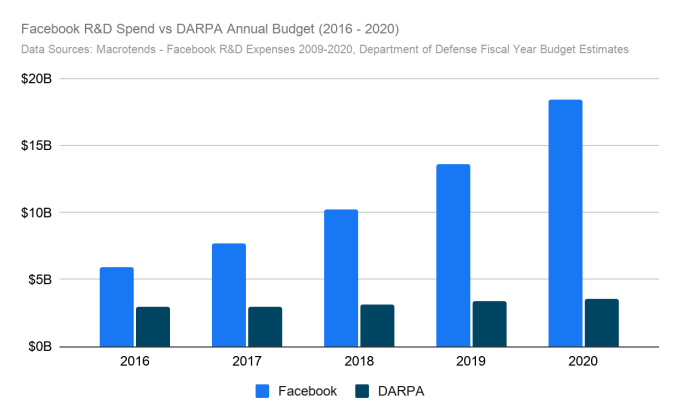 Look no further than the U.S. government’s own (now defunct) Office of Technology Assessment. The agency aimed to provide a thorough analysis of burgeoning issues in science and technology, exposing many public services to a new age of innovation and implementation. Amid a period of downsizing by a newly Republican-led Congress, the OTA was defunded in 1995 with a peak annual budget of just $35.1 million (adjusted for 2019 dollars). The authoritative body on the importance of technology to the government was deemed duplicative and unnecessary. Despite numerous calls for its reinstatement, it has since remained shuttered.

Despite dwindling public sector investment and lackluster political action, the problems that technology is poised to help solve haven’t gone away or even eased up.

From the COVID pandemic to worsening natural disasters and growing societal inequities, public leaders have a responsibility to solve the pressing issues we face today. That responsibility should breed a desire to continuously iterate for the sake of constituents and quality of life, much in the same way private tech caters to the product, user and bottom line.

My own experiences in government have shaped my career and approach to building new technologies more than my time in Silicon Valley. There are plenty of tangible parallels to the private sector that can attract driven and passionate tech workers, but the responsibility of giving government work realistic consideration doesn’t just fall at the feet of talent. The governments that we depend on must invest more capital and pay closer attention to the tech community.

Tech workers want an environment where they can thrive and get to see their work in action, whoever the end user may be. They don’t want to feel hamstrung by the threat of decreased funding or the red tape that comes as a result of government partisanship. Replicating the unimpeded focus of Silicon Valley’s brightest examples is a must if we’re serious about drawing talented individuals into government or public-sector-focused work.

A great example of these ideas in action is one of the most beloved government agencies, NASA. Its continued funding has produced technologies developed for space exploration that are now commonplace in our lives, such as scratch-resistant lenses, memory foam and water filters. These use cases came much later on, only after millions of dollars were invested without knowing what would result.

NASA has continued to bolster its ability to stay nimble and evolve at a rapid pace by partnering with private companies. For talent in the tech sphere, the ability to leverage outside resources in this way, without compromising the product or work, is a boon for ideation and iteration.

One can also point to the agency when considering the importance of keeping technology research and innovation as apolitical as possible. It’s one of the few widely known public entities to prosper on the back of bipartisan support. Unfortunately, politicians typically do all of us a disservice, particularly tech workers in government, when they too closely connect themselves or their parties to a particular program or platform. It hinders innovation — and the ensuing mudslinging can detract from talented individuals jumping into government service.

There is no shortage of extremely capable tech workers who want to help solve the biggest issues facing society. Will we give them the legitimate space and opportunity to conquer those problems? There’s been some indication that we can. These ambitious and forward-looking efforts matter today more than ever and show all of us in the tech ecosystem that there’s a place in government for tech talent to grow and flourish.