According to the World Bank, more than one billion people in South and East Asia lack access to a bank account. For many, this makes it difficult to secure loans and other services because they don’t have traditional financial records like a credit score. Jeff’s loan brokerage platform was created to make it easier for financial service providers to integrate alternative data scoring, allowing them to reach more potential borrowers.

The startup, which launched its app in Vietnam last year, announced today it has raised $1 million, led by the Estonian Business Angels Network (EstBAN). The funding will be used to enter other Southeast Asian markets, including Indonesia and the Philippines, and introduce new products, like free credit score and insurance offers, digital discount coupons and mobile wallet cashbacks. Other participants in the round included Startup Wise Guys; Taavi Tamkivi, the founder of Salv who formerly held lead roles at TransferWise and Skype; and angel investors from European on-demand ride platform Bolt.

Jeff currently claims more than 300,000 users in Vietnam. Though it is based in Latvia, Jeff will continue focusing on unbanked people in South and Southeast Asia, said founder and chief executive officer Toms Niparts. Its goal is to build a “super app” that combines personalized loan comparisons with other services like e-commerce, mobile top-ups and online discounts, Niparts told TechCrunch in an email.

Before starting Jeff, Niparts was CEO of Spain for Digital Finance International, a fintech company that is part of the Finstar Financial Group, which has investments in more than 30 countries. This gave Niparts the chance to “learn about the similarities and differences of financial services from the inside in different markets,” he said.

In particular, he saw that in Southeast Asian countries, most loan applicants “were rejected not because of bad credit history, low income or other similar reasons, but because there was not enough data about them.” While some lending companies have developed pilot projects for alternative data scoring, the process is often time-consuming, complicated and expensive.

“This is a massive problem in a big part of the world, and it makes absolute sense to build it as a centralised solution,” Niparts said.

In Vietnam, Jeff currently has between 12 to 15 active partners at a time (the number changes because lenders occasionally turn off demand, a standard industry practice), and is adding another eight to 10. In total, the company now has about 80 to 100 potential partners in its Vietnam pipeline, and part of its new funding will be used to expand its team to speed up the onboarding process.

In Indonesia, Jeff has identified about 40 potential partners, “but so far we have only been scratching the surface,” said Niparts. “The Indonesian market is considerably larger than what we have seen in Vietnam, and the forecast is we will grow the pipeline to 150-200 banks and partners in 2021.”

The company’s selling point hinges on its ability to accurately measure creditworthiness based on alternative data. For lenders, this means more pre-qualified leads and access to a larger customer segment.

“Building a credit score is a never-ending process, and we are at the very early stages of it. What we have right now is mainly around publicly accessible information and client-consented data,” Niparts said. This includes behavioral analytics, smart devices meta data, data from social media and other sources that have open APIs.

As Jeff grows, it also plans to make partnerships with mobile wallets, telecom companies and consumer apps. It is developing a lender toolkit that includes bank portal and lender API to reduce the amount of time needed to integrate with the app. 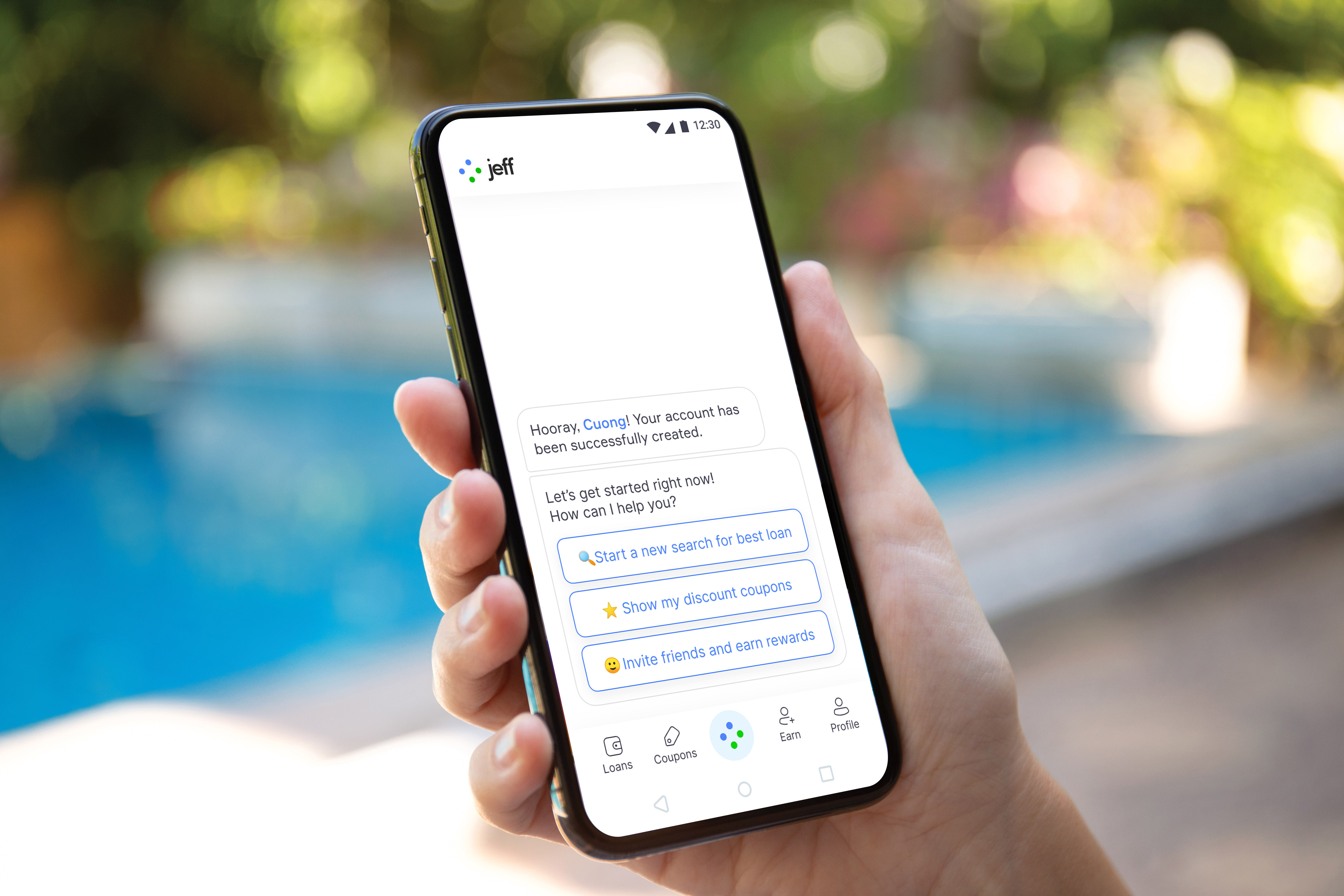 Borrowers sign up for Jeff with the app’s chatbot and can start getting offers once they enter basic information like their name, contact information, the amount they want to borrow and the purpose of the loan. But adding more details and data sources to their profiles, which are screened by multiple lenders at once, increases their chances of approval, and unlocks more offers. This may include uploading documents, connecting social media accounts or consenting to share their smart device metadata.

“As we evolve, new integrations and compatible accounts from other service providers — such as utilities, food delivery and more — will be regularly added,” said Niparts.

“Our ambition for Jeff is to become a super app, where people can not only get access to financial services that were previously unavailable to them, but also tap in other benefits and discounts,” Niparts said. “This is also a great way to learn more about creditworthiness and what’s on demand. Every new interaction gives us more data and insights to further evolve the accuracy and value added of Jeff’s credit score.”

The number of fintech startups focused on financial inclusion is on the rise across Southeast Asia. Jeff’s competitors fall into two main categories. The first are comparison portals like TopBank, TheBank and GoBear (which recently announced it is closing), that allow users to compare financial providers and banks, but don’t focus on enabling them to access services. The second are companies like CredoLab, Seon and Kalap that provide third-party services like single data-source insights and fraud prevention, but “do not have control over the customer journey,” Nipsart said.

Jeff’s goal is to “be a one-stop shop for both,” he added. “We provide both clients, as well as deeper insights about them for banks and other partners using our platform. At the same time, we are the main point of interaction for the users, which not only solves the main need of comparing financial services and accessing them, but also offers an increasing range of other discounts and benefits.”