The alternative asset market showed promise pre-pandemic but amid a broader rally among traditional asset classes, the number of investors searching for and promoting value in the space has exploded. That has, in turn, promoted a pretty major influx of VC dollars into startups building platforms that wrangle these buyers into specific communities.

Enter, Alt. The young startup has received more than $31 million from top investors intrigued by the particularly hot space it has bulked up its expertise in — physical sports trading cards. The company provides a GOAT-like marketplace for the cards, authenticating the transactions and providing buyers with the peace of mind that the slice of cardboard they’re dropping several thousands of dollars on is no fake. While entities like NBA Top Shot have rallied a new generation of buyers around blockchain-era digital trading cards, its success has been enabled by the excitement that traditional collectibles markets have been garnering recently.

After years of stocking up on sports trading cards, Alt CEO Leore Avidar is just happy to have more people to talk about his obsession with. Like many in the sports card community, Avidar has spent years collecting cards and engaging with forums online, but it’s been an interest he hasn’t been able to share with friends and family given its somewhat fringe appeal. This isn’t the case today, Avidar says, with old collectors reentering the market as they dust off aged collections and new collectors intrigued by skyrocketing prices and a more connected online community.

“I’ve talked with a lot of people in the community and one of the things I love is how intergenerational this is. I see a lot of kids and their parents doing this together,” Avidar tells TechCrunch.

As the market has moved more mainstream, platforms like Alt have also begun seeing more investor interest. In the span of a few months, Alt wrapped a pair of funding rounds from investors hungry to embrace a play in the market — a seed round led by First Round and a Series A led by Reddit co-founder Alexis Ohanian’s new firm Seven Seven Six. Other Alt investors include John and Patrick Collison, Kevin Durant, SV Angel, BoxGroup, Sue Wagner and Jeff Morris’s Chapter One. 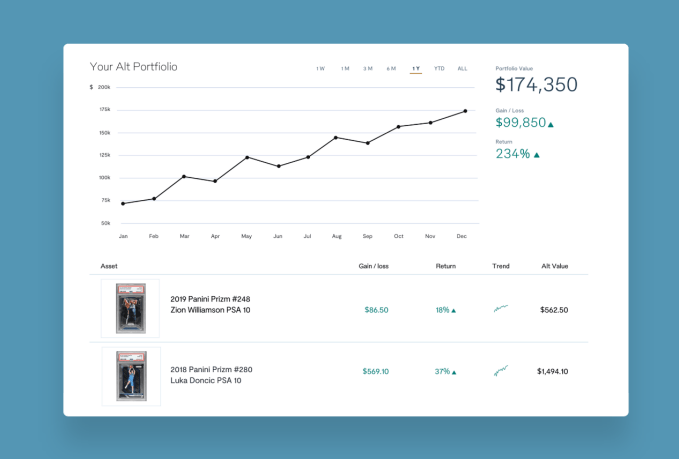 Avidar wants Alt’s platform to increase transparency and liquidity in the alternative assets space and make acquiring assets here just as easy as platforms like Robinhood have made buying and selling stocks. Avidar’s central strategy to capturing this market and bringing it to his platform is by significantly undercutting the fees structure of other sites, with Alt charging just 1.5% of the total sales price including processing fees.

In addition to authenticating its stock, Alt has had to build some infrastructure that’s somewhat custom to the trading cards market. Users that are less concerned with holding their physical cards and more worried about them being lost or damaged over time can opt to have Alt store their physical cards in a temperature and light-controlled vault (for a fee), ensuring that physical degradations of the card don’t affect its value. One of Alt’s key features that Avidar expects to be popular with collectors is their Zestimate-like Alt Value rating, which will give card buyers and sellers a closer idea of what the market value of their card is based on historic transactions and the trending growth metrics.

The team is launching the Alt market with sports trading cards, but plans to expand its reach to other alternative assets as the marketplace matures further, with Avidar highlighting markets like watches, sneakers and art as potential growth areas.