During its livestreamed event today, Spotify officially confirmed its plans to launch paid podcast subscriptions on its platform. As a first step, the company will this spring begin beta testing a new feature in its Anchor podcast creation tool that will allow U.S. creators to publish paid podcast content aimed at their “most dedicated fans.” It also opened up signups for this and other new features, starting today.

Spotify had hinted at its plans for paid podcast content during its fourth-quarter earnings call earlier this month, when it said it was exploring ideas like paid podcast subscriptions and à la carte payments. But it didn’t detail when these new options would go live or how they would work.

At its online event today, Spotify more formally announced its plans to enter the market of paid podcasts, initially with a new service that would allow Anchor creators the ability to offer paid podcast subscriptions supported by their listeners.

This sort of idea is not new, to be clear. Already, some podcasters offer paid access to bonus material — for example, through a service like Stitcher Premium, which promises both an ad-free experience and bonus episodes. Some creators may even independently offer paid feeds through their own platforms.

But until now, a similar option was not available to Spotify creators.

“We have found that, through our research, it seems to work especially well for creators who have really engaged and dedicated audiences — regardless of the audience size,” he told TechCrunch in an interview following Spotify’s event. “We’ve also found that podcast listeners do tend to be open to financially supporting the shows they love,” he added.

The company was hesitant to detail some of the specifics of how paid subscriptions would work at launch, but did say that the model would involve a revenue share between creators and Anchor, where creators keep the majority of the earnings. Anchor will also allow creators to determine what price to charge their listeners for the paid experience and what that experience would include — like bonus episodes or interviews, or even ad-free content, if they prefer.

It will then use its understanding of what creators actually do with paid subscriptions to inform its product launch and its “best practices” recommendations in the future.

We also understand the offering will be limited to those who use Anchor to record and publish across podcast platforms. However, it will more immediately benefit creators with a strong Spotify presence and a loyal listenership.

But Mignano points out that creators may be able to grow their paid subscriber base thanks to Spotify’s tools for podcast discovery.

“The problem is the system for doing this type of paid subscription so far in podcasts has been really disjointed,” he explained. “It hasn’t been a really seamless experience for the listener, and it hasn’t really been a great experience for the creator. We feel like that’s really held this model back and hindered creators’ reach and ability to gain paid subscribers,” he said. 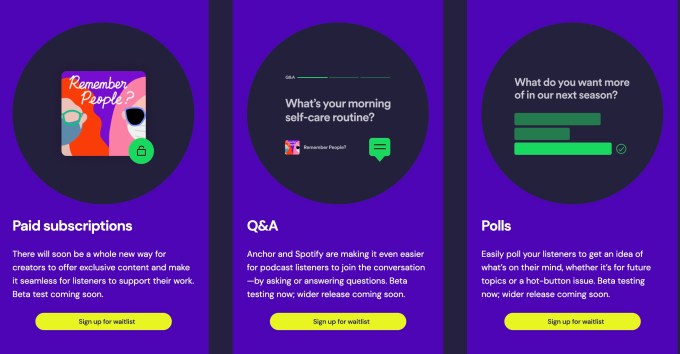 In other words, users may be open to the idea of paid bonus material, but they don’t necessarily want to switch between apps to gain access, nor do they want to figure out how to get paid RSS feeds into some third-party podcast listening app.

Spotify, meanwhile, will try to make discovery easier. It will highlight the paid content alongside the free material on the podcast’s main page, for example. Plus, in the same way that Spotify today helps users discover new podcasts they may like to try, it will also point to paid subscription-based podcasts in the future as the new model rolls out further.

Anchor says it will initially open up the beta test in the U.S. to a small number of creators, but aims to expand access to more creators as soon as reasonably possible. The test, for the time being, will only focus on paid subscriptions, but Mignano told us the company may explore the à la carte model in the future.

Paid podcasts were only one of several new features Anchor announced today at the Spotify event.

The company also announced the launch of a WordPress partnership that makes it easier for bloggers to turn their posts into podcasts, either by reading the blog posts themselves or leveraging third-party text-to-speech technology Anchor provides.

Anchor will also expand beta testing of video podcasts, which so far have been tested by only a handful of creators, including Higher Learning from The Ringer.

And it will begin beta testing new, interactive features, like polls and Q&A, with a small number of creators in the months ahead.

These features could potentially overlap with paid subscriptions. For example, some podcast creators may choose to make their videos a paid feature, or perhaps other interactive features. It remains to be seen how they’re put to use.

But more broadly, features like polls and Q&As could help Spotify better differentiate an interactive podcast from a live audio program, like those popularized by the buzzy new app Clubhouse. The advantage of the latter is that it allows for audience participation in the “show,” rather than being a one-way street where hosts control the experience. But on the flip side, Clubhouse rooms can also have folks who drone on and on, or they can become boring, when not carefully managed.

Anchor says it doesn’t intend to charge creators for access to its tools, beyond taking a rev share on subscriptions.

“I think our vision with Anchor and Spotify has always been to really empower creators. In the Anchor suite of tools, we’ve never charged creators for any features because we believe that charging creators can often represent friction that stands in the way of them trying to actually make something and getting it out into the world,” Mignano said. “We want to enable creators to do whatever they want, as far as expressing themselves through these new tools,” he added.