A new market forecast predicts app spending will reach $270 billion by the year 2025, including paid downloads, in-app purchases and subscriptions. According to data from Sensor Tower, in-app spending will return to pre-pandemic levels of stable growth over the next few years, downloads will continue to grow and, perhaps most notably, it’s predicting app store spending in non-game apps will overtake mobile game spending by 2024.

This is a big bet, given that, today, consumers spend twice as much on mobile games than on non-games. The firm, however, believes the subscription model now being adopted by a range of mobile apps will cause a shift in the market. By 2024, it expects non-game spending to reach $86 billion compared with $73 billion in game spending. And by 2025, that gap will widen, with non-games reaching $107 billion while mobile games reach $78 billion. 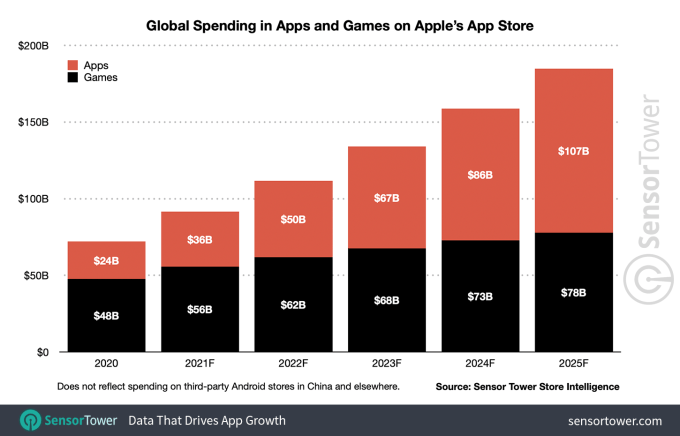 Last year, global consumer spending in the top 100 subscription apps was up by 34%, year-over-year, to give you an idea of the current state of the market. But there were already some indications that subscription growth was being impacted by larger apps, like Netflix and Tinder, which found workarounds to in-app purchases.

What Sensor Tower also can’t predict is how the regulatory environment of the next several years will play out across the app stores. Today, companies like Apple and Google require apps to charge customers for subscriptions via Google and Apple’s own payment mechanisms. But new anti-competition laws could be enacted that would allow publishers to market their own subscriptions inside their apps, which then redirect users to their own channels to make those purchases. Such a change would have an outsized impact on app store subscription growth trends, and, therefore, this forecast.

Though the pandemic pushed in-app spending up by 30% year-over-year to a record $111 billion in 2020, the new forecast predicts general in-app spending will return to pre-COVID levels over the next five years. It says gross revenue across both app stores will climb each year with a 19.5% compound annual growth rate (CAGR) to reach $270 billion by 2025. Of that figure, $185 billion will be App Store spending, versus $85 billion on Google Play. 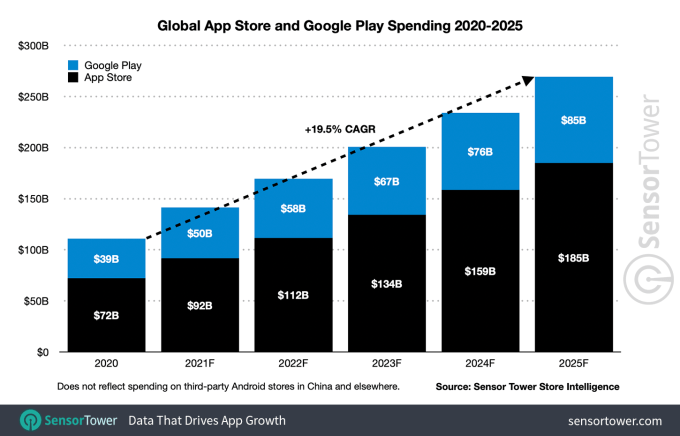 European markets will drive growth in app store spending from 2020 through 2025, led by the U.K. This is not the equivalent to which markets see the most spending in total, but rather is about where growth is taking place — in other words, opportunity for app makers. By 2025, 11 European countries will pass the $1 billion in consumer spending milestone, to collectively reach $42 billion in consumer spend. 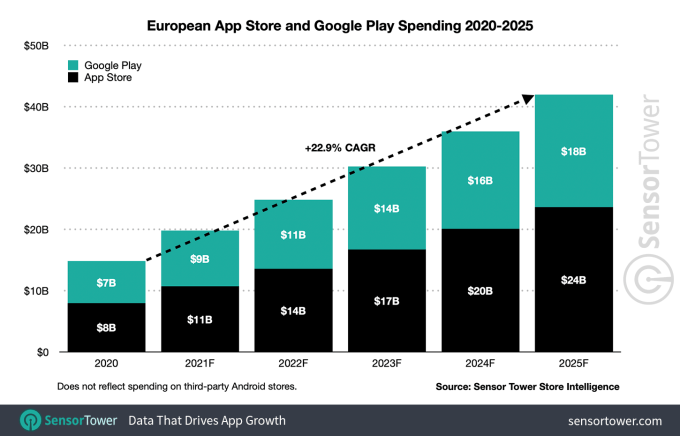 Downloads, meanwhile, will continue to grow over the next several years, to reach 230 billion by 2025, the forecast predicts, with Google Play accounting for a majority of that figure, with 187 billion global downloads. In the U.S., however, App Store downloads in 2025 (10.6 billion) will top those from Google Play (6.3 billion), the report concludes. 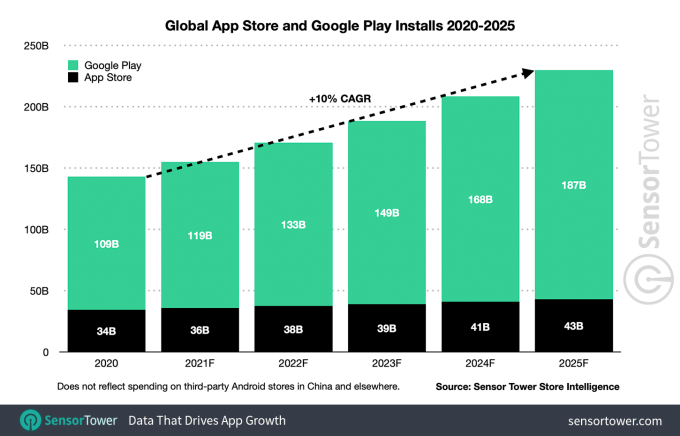