Abound, an online marketplace that helps independent retailers stock their shelves with new products from up-and-coming brands, is announcing that it has raised $22.9 million in its first institutional round of funding.

CEO Bill Shope founded the company with Niklas de la Motte and Drew Sfugaras. He told me that small retailers are constantly on the hunt for new products, which means attending trade shows several times a year. Abound, on the other hand, allows them to find those products through an online shopping experience, with wholesale prices (a.k.a. discounts of up to 50%), free returns and, in some cases, Net 60 sale terms (meaning retailers don’t have to pay until 60 days after the invoice).

The startup actually began as a community connecting manufacturer’s representatives and retailers, but Shope said the team “kept seeing the limits of that model,” while some retailers were asking to buy from the brands directly. So the team decided to support that experience, starting out by recruiting 50 brands with an offer of free consulting — as long as they were willing to be one of the brands on the marketplace when it launched in October 2019.

Of course, the retail environment changed dramatically in the following months, as the pandemic forced stores to close and/or adopt social distancing measures. Shope said the startup saw a dramatic, short-term decline in sales — but things quickly bounced back and kept growing as “all the trade shows got canceled.”

Partly, that’s because Abound also supports e-commerce retailers, but Shope noted that “the brick and mortars that were succeeding had a very powerful hybrid model,” where they continued to operate a physical store while also quickly launching websites and adding features like curbside pickup. 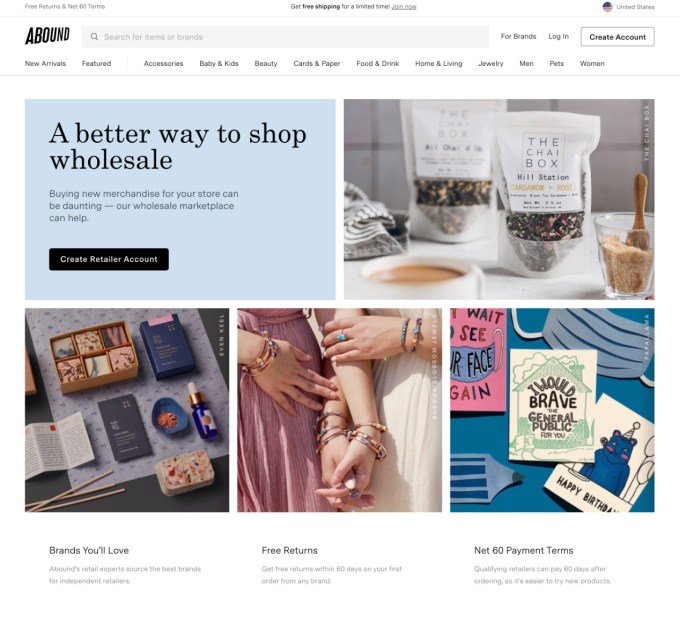 Abound says that since the beginning of 2020, it has added 180,000 new products in categories like baby and kid products, beauty, food and drink, home and living, jewelry and more. And monthly sales volume has increased 20-fold.

“From a retail perspective, I don’t think there’s any going back [to pre-COVID buying models,]” Shope said. After all, even before the pandemic, independent retailers had to compete with giants like Amazon and Walmart. “You’re not going to beat them on convenience products. The store that’s helping consumers discover new brands, or donating 10% of profits to charities — those are types of stories and products you need to have to draw consumers into your store.”

The funding was led by Left Lane Capital, with participation from RiverPark Ventures, All Iron Ventures and branding firm Red Antler. This will allow Abound to grow the team, expand internationally and continue developing the product.

My family has been in independent retail for the last 20 years. Growing up, I attended many industry events, so I have long understood how under-optimized the wholesale buying and selling experience is. With the cancellation of most major trade shows in 2020 and 2021, emerging brands and independent retailers have been seeking new distribution channels to support their business ambitions. Abound offers an exciting and unique alternative to the legacy wholesale model at a time when small businesses need it most.