Nate Faust has spent years in the e-commerce business — he was a vice president at Quidsi (which ran Diapers.com and Soap.com), co-founder and COO at Jet (acquired by Walmart for $3.3 billion) and then a senior vice president at Walmart.

Over time, he said it slowly dawned on him that it’s “crazy” that 25 years after the industry started, it’s still relying on “single-use, one-way packaging.” That’s annoying for consumers to deal with and has a real environmental impact, but, Faust said, “If any single retailer were to try to tackle this problem right now on their own, they would run up into a huge cost increase to pay for this more expensive packaging and this two-way shipping.”

So he’s looking to change that with his new startup, Olive, which consolidates a shopper’s purchases into a single weekly delivery in a reusable package.

Olive works with hundreds of different apparel brands and retailers, including Adidas, Anthropologie, Everlane, Hugo Boss, Outdoor Voices and Saks Fifth Avenue. After consumers sign up, they can install the Olive iOS app and/or Chrome browser extension, then Faust said, “You shop directly on the retailer and brand sites you normally would, and Olive assists you in that checkout process and automatically enters your Olive details.” 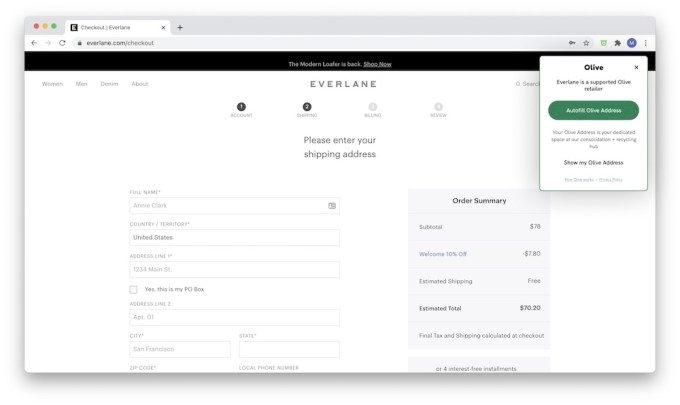 The products are sent to an Olive consolidation facility, where they’re held for you and combined into a weekly shipment. Because the retailers are still shipping products out like normal, all that packaging is still being used — but at least the consumer doesn’t have to dispose of it. And Faust said that eventually, Olive could work more closely with retailers to reduce or eliminate it.

Until then, he said the real environmental impact comes from “the consolidation of deliveries into fewer last-mile stops” — the startup estimates that doubling the number of items in a delivery reduces the per-item carbon footprint by 30%.

The weekly shipments are delivered by regular mail carriers in most parts of the United States, and by local couriers in dense urban areas. They arrive in reusable shippers made from recyclable materials, and you can return any products by selecting them in the Olive app, then putting them back in the shipper and flipping the label over.

In fact, Faust argued that the convenience of the return process (no labels to print out, no visits to the local FedEx or UPS store) should make Olive appealing to shoppers who aren’t drawn in by the environmental impact.

Olive delivery is available at no extra cost to the consumer, who just pays whatever they normally would for shipping.

Plus, Olive is starting with apparel because “there’s not that same expectation of speed” that you get in other categories, and because the items cost enough that the delivery economics still work out, even if you only order one product in a week.

Walmart says it will discontinue Jet, which it acquired for $3B in 2016