“Our mission is to ensure positive human outcomes during life-saving missions,” says Edgybees co-founder and CEO Adam Kaplan. “Our new partners will be key to continuing to push our mission forward. With their unique industry expertise, we are poised to expand our global footprint and drive innovation within the industry. We look forward to the next phase of growth, meeting the critical demands of the defense, public safety and critical infrastructure markets.”

Using the company’s Visual Intelligence Platform, users can easily register and track assets in video shot by a drone, for example. The standard use case here would be to help first responders get an accurate picture of an evolving emergency on top of live images from the scene, with the ability to track all of their assets and personnel in real time. But Edgybees has also shown other use cases that range from tracking and visualizing golf games to insurance and defense use cases.

About a year ago, Edgybees, which had its start in Israel but is now based in San Diego, launched its Argus platform, which makes it easier for users to bring their own drone and other live video platforms to the service’s geo-registration engine. 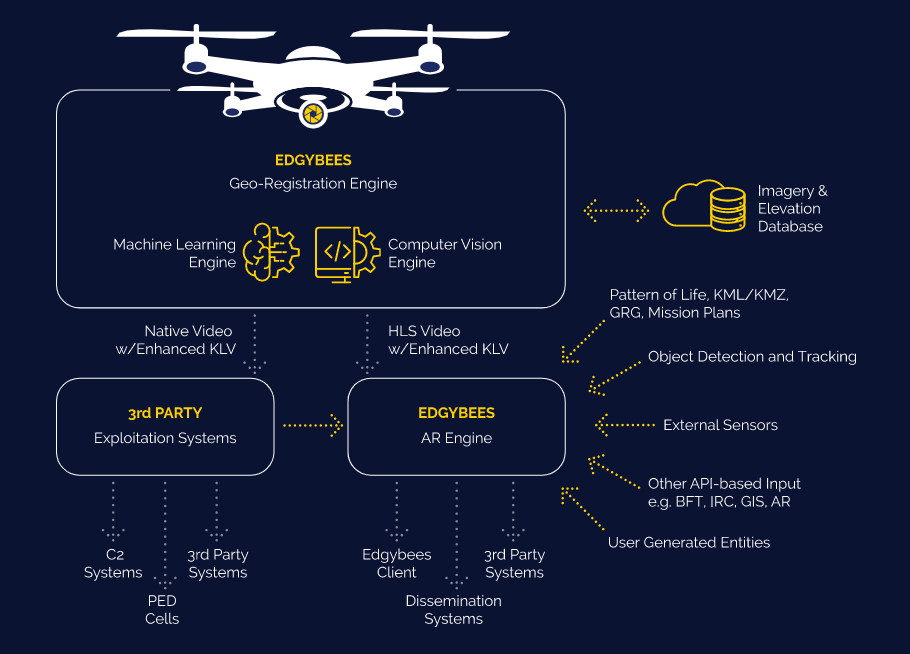 “Edgybees solves a huge problem in spatial computing: How do you really know what you are seeing through fast-moving airborne or other video feeds? Edgybees brings together the real and virtual worlds and helps first responders save lives, industrial drone users save money and defense teams get the mission done,” OurCrowd CEO Jon Medved explained.

Similarly, Seraphim managing partner and CEO Mark Boggett noted that he thinks of Edgybees as a Google Maps fused with live video. “Their geo-referencing capability is a breakthrough technology that brings a new level of insight and usability to video streams from space, drones or bodycams. We are very excited about Edgybees, not only for the innovation it brings to public safety and defense, but because of its ability to be utilized in a wide range of industries,” he said.