Class, launched less than a year ago by Blackboard co-founder Michael Chasen, integrates exclusively with Zoom to offer a more customized classroom for students and teachers alike. The inaugural product, Class for Zoom, uses both management and instruction tools to bolster the video conferencing call experience.

Formerly named ClassEDU, the startup announced today that it has added $30 million to its balance sheet, upping its total funding secured to $46 million. Raising that much pre-launch gives the startup key wiggle room, but it also gives validation: a number of Zoom’s earliest investors, including Emergence Capital and Bill Tai, who wrote the first check into Zoom, have put money into Class.

The money will be used to grow Class’ 60-person team to 100, as well as meet international demand for its product. More than 6,000 institutions from the United States, Dubai, Japan and Europe are on Class’ waitlist.

On the instruction side, Class for Zoom helps teachers launch live assignments, quizzes and tests, which can be completed by students in real time. On the management side, tools range from attendance trackers to features that allow a teacher to see how much time a student is participating in activities. Currently, ClassEDU is in a private, paid beta with more than 60 customers. 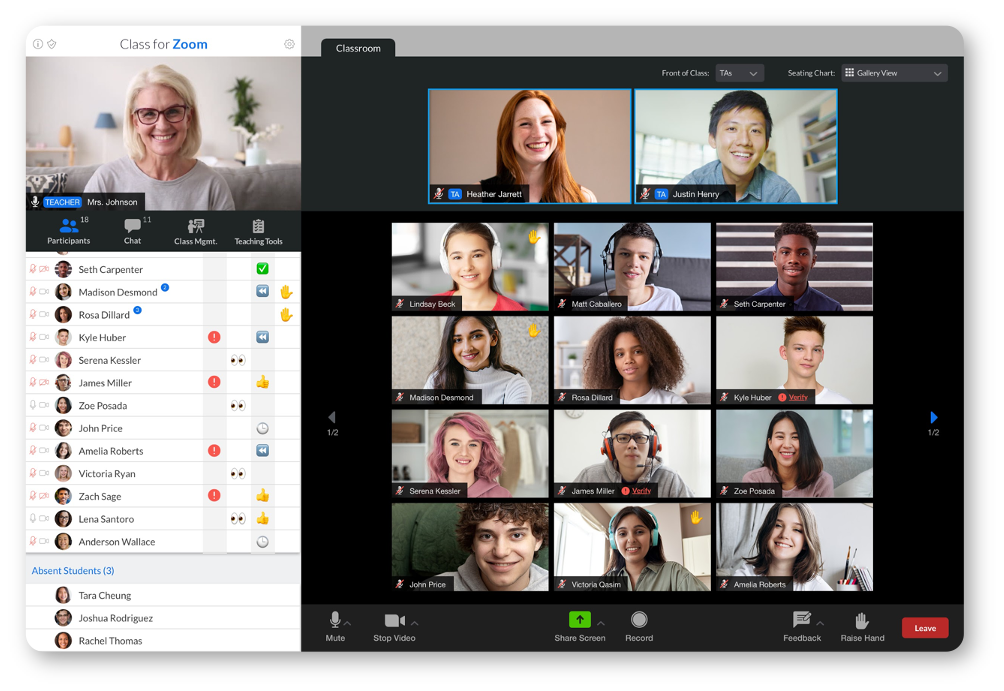 Right now, Class software is only usable on Macs, but its beta will be available on iPhone, Windows and Android in the near future. The public launch is at the end of the quarter.

The startup is built entirely atop the Zoom platform, but functions as a standalone business versus a third-party integration, like what one would find on Zoom apps. Class is using the Zoom SDK, which is free, to use its back-end audio and video capabilities but build front-end interface and experience. Like any early-stage startup that relies on another business to work, the platform risk is notable.

At the same time, the risk comes with reward: Zoom is a household name, which helps Class reduce significant friction when selling to schools, says Chasen. Instead of a school having to replace the technology they have been using for the last year, Chasen says that Class can simply make it better.

“We’re going for the broader, larger deployments that just need to know that they have the stability and the scalability of Zoom, with just teaching learning tools built on top of that,” Chasen said. Over 125,000 schools use Zoom already, he said, which is enough to build a big business. The startup has no current plans to integrate with Teams or WebEx.

The startup sees the changing tide in edtech boiling down to a difference in sales, similar to Udemy’s new president’s sentiment with enterprise sales earlier this week.

“At Blackboard, we had a six to nine month sales cycle, we’d have to explain that e-learning is a thing,” Chasen said, who was at the LMS business for 15 years. “[With Class] we don’t even have to pitch. It wraps up in a month, and our sales cycle is just showing people the product.

The big hurdle for Class, and any startup selling e-learning solutions to institutions, is post-pandemic utility. While institutions have traditionally been slow to adopt software due to red tape, Chasen says that both of Class’ customers, higher ed and K-12, are actively allocating budget for these tools. The price for Class ranges between $10,000 to $65,000 annually depending on the number of students in the classes.

“We have not run into a budgeting problem in a single school,” he said. “Higher ed has already been taking this step towards online learning, and they’re now taking the next step, whereas K-12, this is the first step they’re taking.”