Zoom was never created to be a consumer product. Nonetheless, the video-conferencing company’s accessibility made it the answer to every social situation threatened by the pandemic, from happy hours to meetings.

Months later, we’re realizing that force-feeding social experiences into an enterprise software company isn’t a perfect solution. Zoom School is a perfect example of what’s not working: Remote education is a hot mess for students, teachers and parents. Instructors, who could once engage a classroom through whiteboard activities, mini-group presentations and one-on-one discussions, are now stuck to one screen.

Well more than six months into a global pandemic, former Blackboard CEO and former PrecisionHawk CEO Michael Chasen is daring to dream: What if we didn’t assume Zoom was a Band-Aid fix for schools? What if someone created a Zoom experience that was designed, not just marketed, for classrooms?

“If I told you that the majority of classes being held online today, teachers couldn’t take attendance, hand out assignments, give a test or a quiz, grade anything or talk one on one with students, you would say how is teaching and learning even happening?” he told TechCrunch.

Chasen is launching a new company, ClassEDU, with a first product that isn’t too shy about its ambitions, named Class for Zoom. Although the name might convince you that it’s a third-party add-on to Zoom, it’s an entirely independently owned company. And it’s built for teachers who need to find a way to create more-engaging, live-synchronous learning.

When a teacher logs into the Zoom call, they’ll be brought to a screen that looks like this: 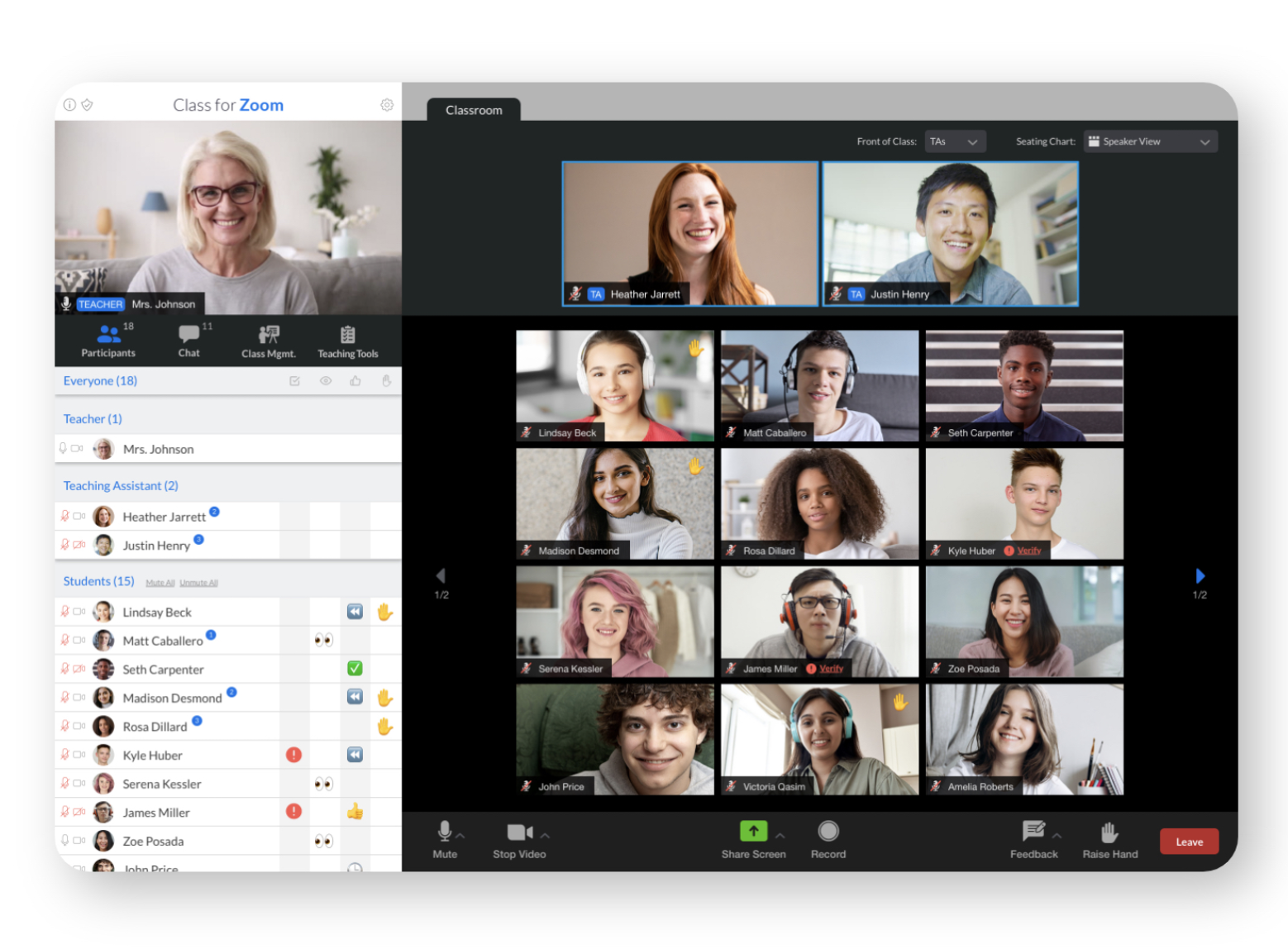 As you can see, they can toggle between the classroom, assignments, tests and quizzes, or the whiteboard. Instead of unorganized tab time, the teacher can take the video call as a one-stop shop for their entire lesson, from syncing materials from the CMS system to polling students on their thoughts to grading the quiz they just took. It’s a full-suite solution, and an ambitious one at that.

The best way to break down Class for Zoom’s features is by separating them into two buckets: instruction tools and management tools.

On the instruction side, Class for Zoom helps teachers launch live assignments, quizzes, and tests, which can be completed by students in real time. Students can also be polled to motivate engagement. Instructors can be granted access to unmute a class or mute a class during appropriate times. 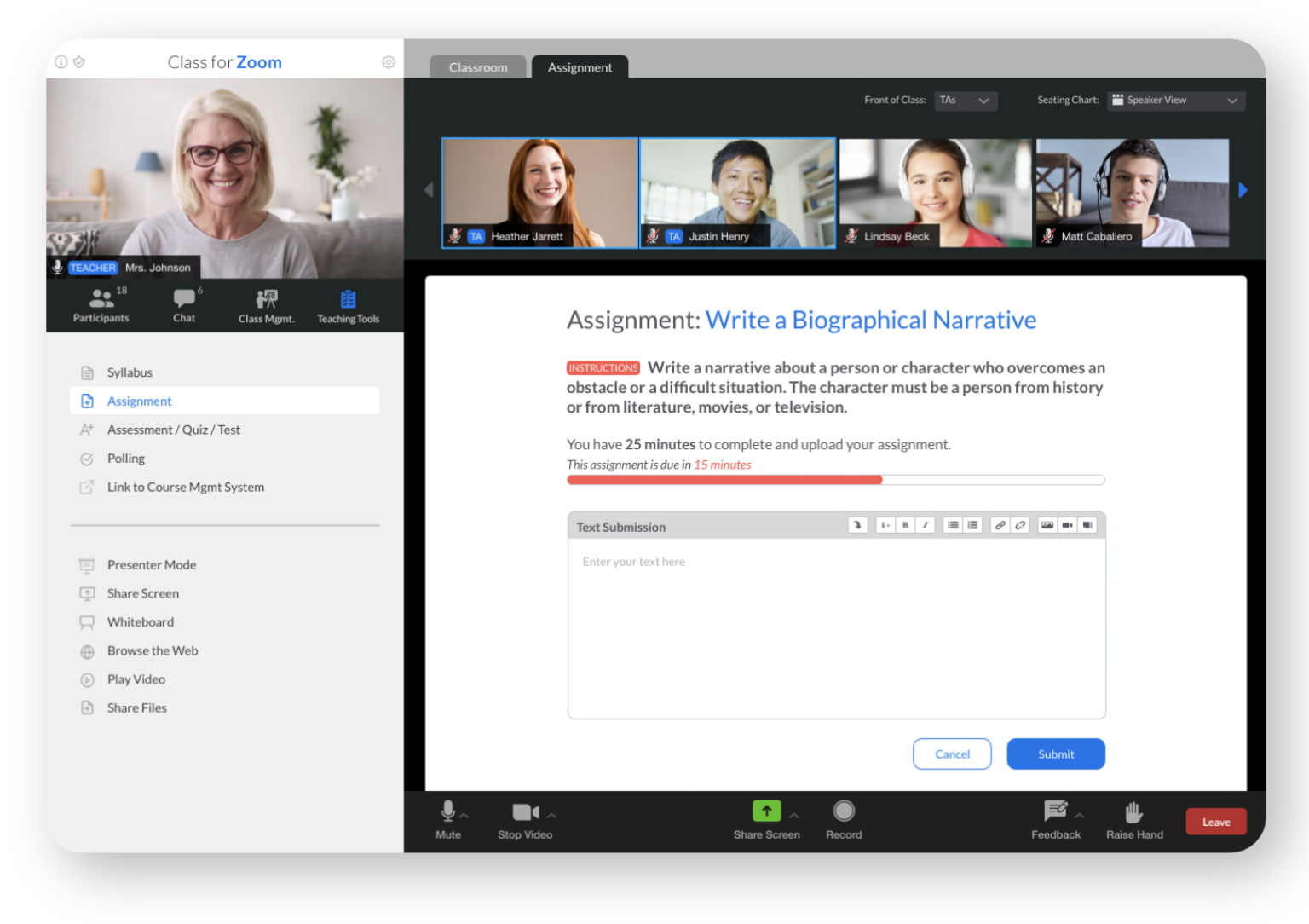 The marquee feature of the instruction tools is that teachers and students can talk privately without leaving the Zoom call if there’s a question. This is key for shy students who might not want to speak up, inspired by Chasen’s daughter, who struggled to share in front of an entire classroom. 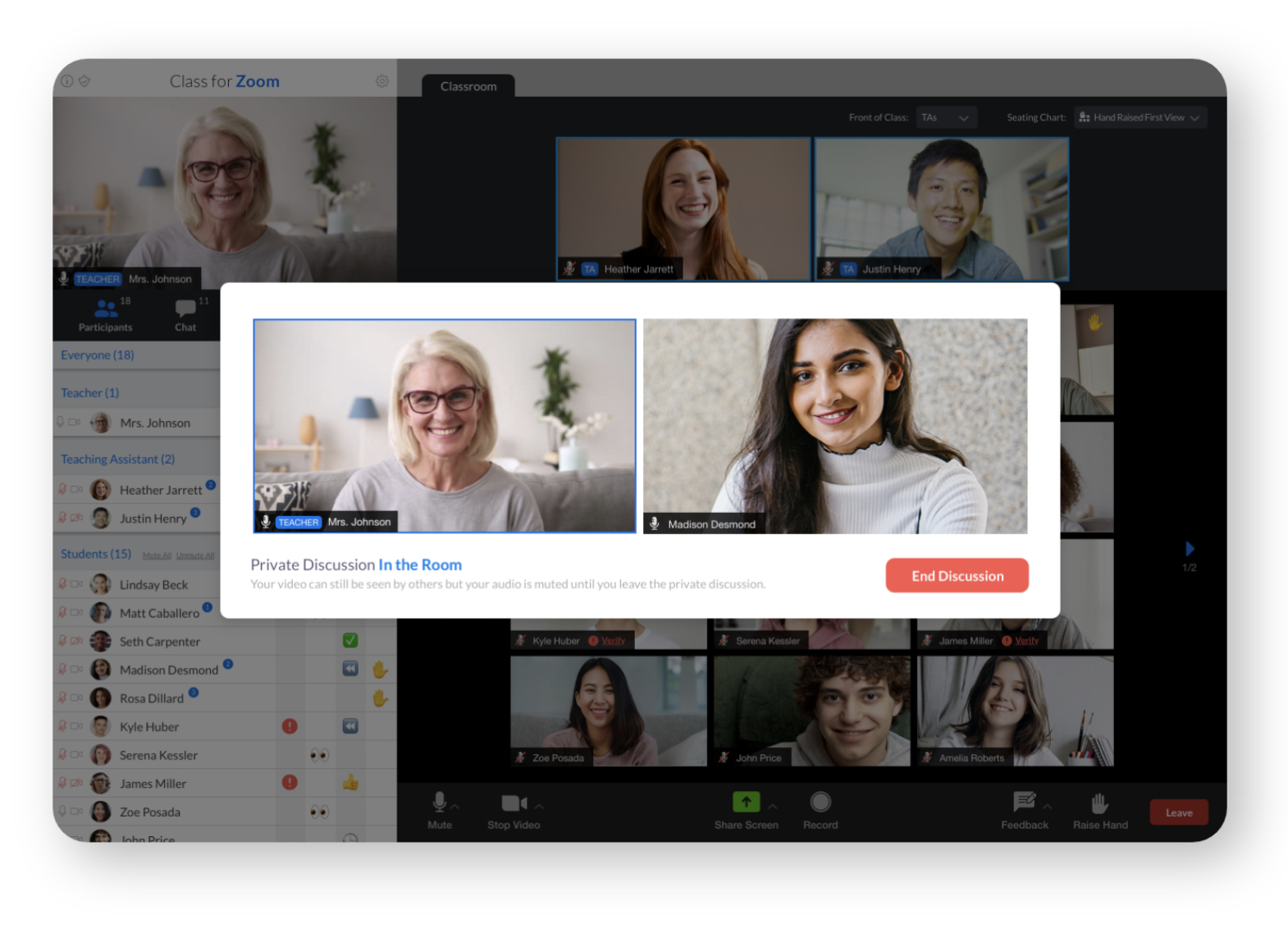 On the management side, tools range from attendance trackers to features that allow a teacher to see how much time a student is participating in activities. Chasen, who founded Blackboard when he was in college, also gave a nod to his prior company by allowing teachers to integrate CMS systems right into the Zoom classroom.

Less popular, Chasen jokes, is Class for Zoom’s ability to give teachers intel on if a student has Zoom as the primary app in use on their screen. The attention-tracking feature is not new, but it is oversight some people might not be okay with. Students can disable the ability to track focus, but administrators can make it mandatory. The platform also allows teachers to monitor a student’s desktop during an exam to limit cheating.

Class for Zoom’s access to a student’s personal computer could make some users uncomfortable. Zoom has been banned from some school districts due to security concerns, and a wave of Zoombombing attacks, where an unwanted participant hacks into a call and streams inappropriate or offensive content. In response, the video conferencing company has put in security measures, such as verification tools and waiting rooms.

Chasen says that Class for Zoom is balancing its access to information by giving students the option to opt into tracking features versus forcing them to.

Class for Zoom isn’t the only startup trying to make Zoom a better experience. A number of tools built atop Zoom have launched in the past few months, partially because the price of Zoom’s SDK is $0. Macro raised $4.3 million to add depth and analysis to Zoom calls, with an interface that tracks metrics like speaker time and notes. It has more than 25,000 users. Mmhmm got buzz in July for its creative demo that lets users create a broadcast-style video-conferencing experience atop their videoconferencing platform of choice.

Somewhat predictably, Zoom launched a competing feature with Mmhmm that calls into question whether the startups that layer atop incumbents look more like features instead of full-fledged platforms.

Of course, one threat to any of these products is Zoom’s mood. If Zoom tweaks its policy on SDK and API, it could completely wipe out Class for Zoom. But Chasen has reason to be optimistic that this won’t happen.

Today, Class for Zoom announced that it has raised a $16 million seed round, pre-launch, co-led by Deborah Quazzo of GSV Ventures and Santi Subotovsky of Emergence Capital and a current Zoom board member. Other investors includee Jim Scheinman of Maven Ventures, an early investor in Zoom and the person who is credited with naming Zoom; Bill Tai, who is Zoom’s first committed backer; Steve Case, co-founder of AOL and CEO of Revolution.

When asked if the Zoom investor involvement works as “insurance” to protect the startup, Chasen said he didn’t view it like that. Instead, the founder thinks that Zoom is focused more on scale than in-depth specialization. In other words, Zoom isn’t going to pull a Twitter, but instead likens the platform’s developer friendliness to that of Salesforce, which has tons of tools built atop of it. Second, Class for Zoom is a certified Zoom reseller, and makes money off of commission when a district buys Zoom through them. The informal and formal partnerships are enough glue, it seems, for Chasen to bet on stability.

As for whether the technology will stay exclusive to Zoom, Chasen says that it’s the main focus because Zoom is the “de facto industry standard in education.” If other platforms pick up speed, Chasen says they are open to experimenting with different software.

Chasen declined to share exact numbers around pricing, but said that it is a work in progress to find a price point that districts can afford. It’s unclear whether the company will charge per seat, but the founder said that it will charge some type of subscription service fee.

Accessibility in edtech solutions often relies on the medium that the technology and instruction lives on. For example, even if a product is free to use, if it needs high-speed internet and a Mac to work then it might not be accessible to the average home in America. The digital divide is why products often test usability on Chromebooks, low-cost computers that low-income students, teachers and school districts employ.

In Class for Zoom’s case, the first iteration of the product is being rolled out for teachers with Macintosh computers, which could leave out some key demographics due to expense. It’s worth noting that while students can still participate in a class being run on Class for Zoom without the software, the view, tracking and engagement software will be missing.

Thankfully, the new financing will be used to help ClassEDU build software that is usable on low-cost computers such as Chromebooks, as well as Windows, Android or iPhones. When that happens, teachers and students can both benefit from a more engaging view.

Chasen said that the idea for the startup began brewing just weeks into quarantine, when his three kids began learning from home. Months later, Class for Zoom is finally set to launch its beta version and is opening up its waitlist today. By January, Chasen hopes, it will be accessible to any school that wants it.

Edtech investors are panning for gold