After two days locked up in an Italian prison, American Max Craddock was finally able to make his case to a judge.

“It’s not a weapon of war,” his lawyer told the investigating magistrate. “It’s a toy they sell to children.”

Craddock had been arrested in the Sardinian port city of Olbia in June 2018 after trying to board a private party bus with a collectible flamethrower from Elon Musk’s latest startup, The Boring Company. Craddock had painted his flamethrower black, and written on it the name of a floating music festival in the Bahamas he had attended the previous year while starring in reality TV show Unanchored.

Alarmed by the sight of what he thought was a gun, the bus driver refused to drive off, and then called the police.

Elon Musk’s Boring Co. flamethrower is real, $500 and up for pre-order

“They were very chill at first,” Craddock told TechCrunch in a recent phone interview. “But as the night went on, it kept getting worse. I spent the first night in jail in Olbia and then they took me to prison.”

When Craddock managed to get a lawyer, she told him the judge would probably just let him go with a warning. Instead, the magistrate ordered him back to his cell. That was when Craddock, pictured below, learned possession of a flamethrower in Italy can carry a 10-year prison sentence.

A few months later, author John Richardson was sitting down to work at his home in London when there was a loud knock at the door. He opened it and five police officers barged in wearing tasers and tactical gear.

“I think a couple of them also had handguns,” Richardson told TechCrunch. “But I’m slightly hazy on that because my legs went wobbly.”

The police officers sat Richardson down on his sofa and informed him that they had a warrant to search the premises. “I was like, ‘what’s going on here?’ ” Richardson recalled. “Then something clicked and I said, ‘Is this about the flamethrower?’ ”

The raid was indeed about his flamethrower.

Craddock and Richardson are not the only Boring Company customers to have fallen foul of law enforcement.

More than 1,000 flamethrower purchasers abroad have had their devices confiscated by customs officers or local police, with many facing fines and weapons charges. In the U.S., the flamethrowers have been implicated in at least one local and one federal criminal investigation. There have also been at least three occasions in which the Boring Company devices have been featured in weapons hauls seized from suspected drug dealers.

The upshot: What Musk and his army of fans thought was just another of his money-spinning larks is having real-world consequences for people and countries not in on the joke.

The Boring Company did not respond to detailed questions from TechCrunch for this story.

The spark of an idea

Inspired by Los Angeles traffic, Musk launched The Boring Company in December 2016. The startup’s mission was to solve urban traffic jams by moving cars through tiny tunnels. But re-engineering sewer tunneling technology to build a revolutionary subterranean transportation network doesn’t come cheap. In an effort to drum up awareness and funds, Musk announced in December 2017 a limited run of novelty flamethrowers designed and branded by The Boring Company.

It was a scheme that had produced results earlier that year. Musk raised $1 million just weeks after launching sales of a $20 Boring Company hat.

“I’m a big fan of Spaceballs, the movie,” Musk told Joe Rogan during an infamous podcast in 2018. “They have a flamethrower in the merchandising section of Spaceballs, and, like, the kids love that one.”

Musk did his best to hype sales, tweeting to his Twitter followers, which numbered about 22 million at the time: “Flamethrower obv best way to light your fireplace/BBQ. No more need to use a dainty ‘match’ to ignite!”

Flamethrower obv best way to light your fireplace/BBQ. No more need to use a dainty “match” to ignite! If no wood, just drop your flamethrower in fire place! It will generate way more warmth than a quaint pile of logs.

He also threw a launch party in Los Angeles, where Craddock was one of the first 1,000 customers to collect a flamethrower, just before his European trip. “I removed the gas canister, put the flamethrower in my carry-on, and had no trouble on the flights,” he said.

Musk’s influence and the appeal of the product provided a winning combination.

“I had no intention of going around setting fire to stuff,” said Richardson. “I just thought it looked pretty cool, and was something I could potentially flip for a lot more money down the line.”

The Boring Company would make 20,000 flamethrowers and sell them at $500 each, netting the young company $10 million.

The 20,000 flamethrowers quickly sold out, with orders flooding in from around the world. As the shipping date neared, however, The Boring Company realized its scorching new product could also be a legal hot potato.

“We are told that various countries would ban shipping of it, that they would ban flamethrowers,” Musk told Rogan in 2018. “So, to solve this problem for all of the customs agencies, we labelled it, ‘Not a Flamethrower.’ “

The correct answer was no.

Elon Musk’s flamethrower has already made well over $3.5 million

In London, the flamethrower came to the attention of Operation Viper, a rapid response team dedicated to tackling gun crime. Working with customs officials, Viper tracked Musk’s flamethrowers en route to the nation’s capital. “There has been a debate as to whether these are firearms,” one of the Viper officers wrote in an email to Richardson. “Similar flamethrowers have been seized right across London.” One Londoner had his laptop and several cellphones confiscated along with the flamethrower.

Flamethrower raids were also happening around the U.K. and across Europe. A YouTube vlogger in Manchester was targeted by police after featuring the Boring Company’s gadget in one of his videos, while up to 1,000 purchasers in Switzerland had devices confiscated and were issued fines. One took his case to court, saying the flamethrower was little different from a school Bunsen burner. He lost.

Not just a European problem

Without the immediacy of a Customs check, the backlash to Musk’s flamethrowers in the United States took longer to arrive. But in June 2019, a Democratic lawmaker in the New York State Senate introduced a bill that would criminalize owning and using Musk’s flamethrower.

“Elon Musk’s Boring Company released a new flamethrower… without any concern to the training of the purchasers or their reasons for buying,” reads S1637. “This bill establishes that owning and using a flamethrower is a criminal act, unless it is used for agricultural, construction or historical collection purposes. These dangerous devices should not be sold to civilians, and use needs to be restricted to trained professionals.”

Not every police force believes that new laws are necessary — finding that existing ones are enough. In June 2020, police in Springfield, Massachusetts stopped a car for a missing inspection sticker. One of the officers noticed what he thought was a rifle hidden beneath a seat — actually a Boring Company flamethrower. Its owner, passenger Brandon McGee, was charged with carrying a dangerous weapon and an “infernal machine” (a device for endangering life or property using fire).

The same month, FBI agents executing a search warrant against a Pennsylvania man, Brandon Althof Long, stumbled across his Boring Company flamethrower propped against a wall. Long had been indicted by a federal grand jury on charges of conspiracy to riot and cause civil disorder, and conspiracy to use fire to commit a felony, during riots in Ohio protesting police brutality.

The agents seized the flamethrower out of concern for their safety, which a U.S. district judge later ruled lawful. “Other individuals could be located inside the house and the flamethrower could have been used to endanger officers as they retreated from Long’s home,” she wrote.

Novel items like flamethrowers are rarely specified in law, says Ryan Calo, a law professor and co-founder of the Tech Policy Lab at the University of Washington. “Some items – like guns or spring knives – are weapons ‘per se,’ meaning that they are always weapons. But most statutes have an ‘or other deadly weapon’ clause as well, meaning that anything that is capable of causing serious bodily harm, even a rock, can be a weapon in the right circumstances,” he said.

The problem is, what circumstances? A flame-spouting weed-killer might not attract the interest of police, whereas a similar device styled like an assault rifle is more likely to be considered threatening. “And if you use the item during the commission of another crime, this can lead to a distinct offense of using a deadly weapon to commit a felony,” said Calo.

For all Musk’s portrayal of the Not a Flamethrower as just an entertaining toy, police forces — and criminals — in North America are increasingly treating them as dangerous weapons. In rural Wisconsin, a two-year narcotics investigation led police to arrest two men in July 2020 with a hoard of drugs, cash and weapons. Among the cocaine, pistols and assault rifles prominently displayed in the traditional seizure photo was a Boring Company flamethrower. Similar seizures were displayed by police in Canada in December and again this month. 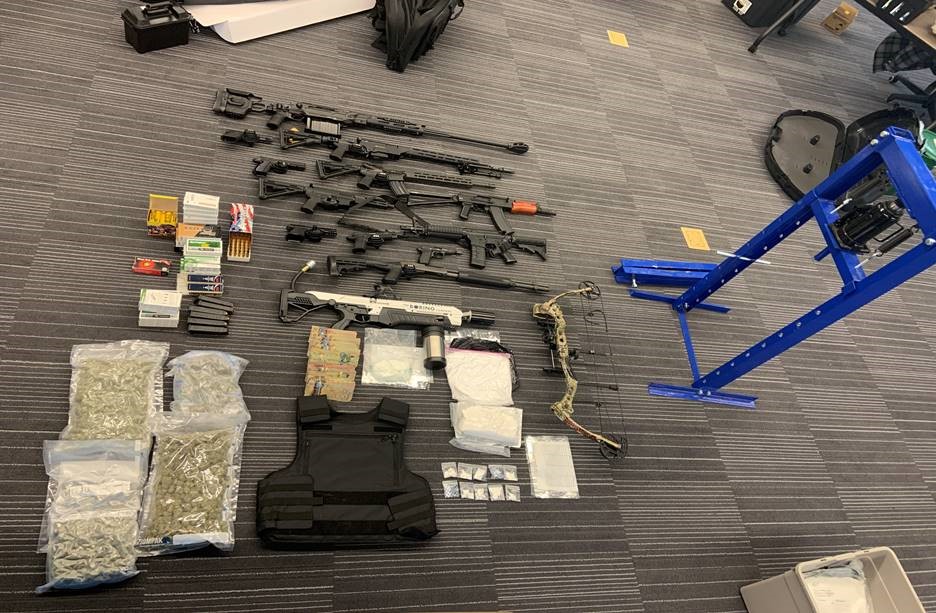 Guelph Police Service lays out items seized including Not a Flamethrower, the novelty item sold by The Boring Company. Image credit: Guelph Police

No company has complete control over what customers do with its products. However, this isn’t the first time a product connected to Musk has been misused.

Tesla, the electric automaker led by Musk, has been criticized for naming its advanced driver assistant system Autopilot and for calling the $10,000 add-on option Full Self-Driving (FSD), even though the driver must remain engaged at all times and is legally liable. A German court has banned the company from using the terms “Autopilot” or “full potential for autonomous driving” on its website or in other marketing materials.

Safety advocates have argued that using terms like Autopilot and FSD misrepresents the capabilities of the system. The name, along with the lack of an in-cabin camera that monitors the driver, has led owners to push well beyond the bounds of the system.

Videos showing Tesla owners misusing Autopilot and FSD abound on YouTube. Some have had run-ins with law enforcement. One Canadian man was charged for sleeping in his Tesla as it drove down the highway.

John Richardson eventually got his Not a Flamethrower back from the Metropolitan police. He now intends to keep it out of the public eye, at least until it’s worth selling. “I’m happy to sit on it for however long,” he said. “And if there is a zombie apocalypse, at least I’ve got one.”

For now, Craddock remains the only person that TechCrunch can identify as having been incarcerated solely for possessing a Not a Flamethrower. “It was a hair-raising experience,” he said. “I’m in the middle of nowhere in Sardinia, on 24-hour lockdown with an older guy giving off Mafia vibes.”

After nearly a week in prison, Craddock was abruptly handed his belongings (flamethrower aside) and set free. “My lawyer asked the judge, ‘Do you really want to be the guy on international news keeping an American in jail over this toy?’ ” he said. “I think that was the key to getting me out.”

Craddock took the first plane home. He says he now regrets taking the flamethrower abroad, and carrying it in public: “I would have preferred not to have spent that week in an Italian prison, but now I’ve got a hell of a story.”

He also has another flamethrower.

“As soon as I got back, I built myself a new one,” said Craddock. “You can follow YouTube videos with links to all the things you need. It’s pretty simple.”

Here’s how to make The Boring Company’s flamethrower