Every year, around 10 million pets go missing in the U.S., and millions of those end up in shelters where they aren’t always reunited with their owners, due to their lack of identification or a microchip. A new mobile app, Shadow, aims to tackle this problem by leveraging a combination of a volunteer network and A.I. technology to help dog owners, in particular.

The startup is working in partnership with animal shelters and rescue organizations around the U.S. to pull in photos of the dogs they’re currently housing, then supplements this with photos pulled from social media platforms, like Twitter and Facebook.

Shadow claims to use A.I. technology to match the photograph of the missing dogs to possible matches from nearby shelters or the web. (Note: A competitor of Shadow’s claims this is not true. The company reached out to us and we published its comments. We also asked Shadow to clarify its tech, given the claims. The competitor then asked for their name to be removed from the article, after arguing it’s clear the Shadow app relies on its manual matching system. Shadow disputes the competitor’s claim. See details below.) 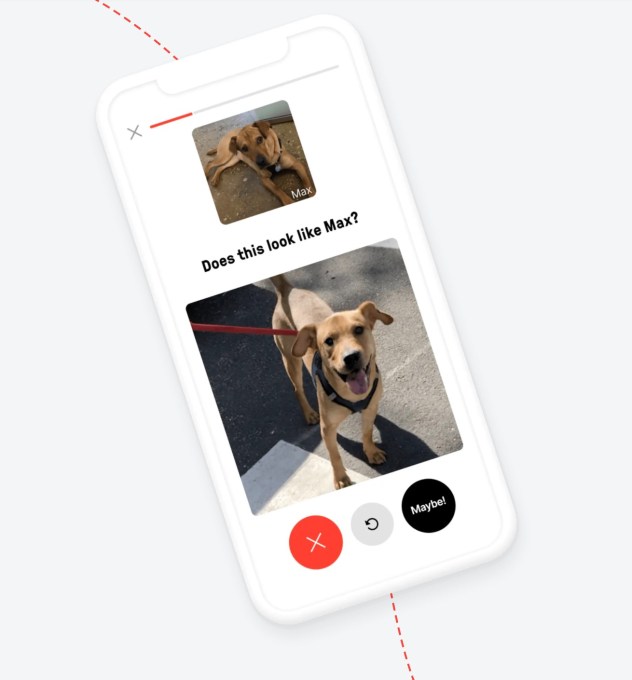 If there’s not a match found, Shadow will then set a search radius based on where and when the dog went missing, and suggest other actions that the dog’s owner can take as the next steps.

This includes viewing all the photographs from the shelters directly, in the case that the technology matching process missed a possible match, as well as working with other Shadow users to help crowdsource activities like hanging “Lost Dog” flyers around a neighborhood, for example.

The app relies on a network of volunteers who help by reviewing shelter photographs and broadcasting missing posters to social media sites they use to increase the chances of the dog being found. Dog owners can even advertise a reward in the app to encourage people to help search.

Today, Shadow claims to have grown its volunteer user base to over 30,000. And it says it partnered with the ASPCA, Animal Care Centers of New York and L.A., the Dallas shelter system and others. 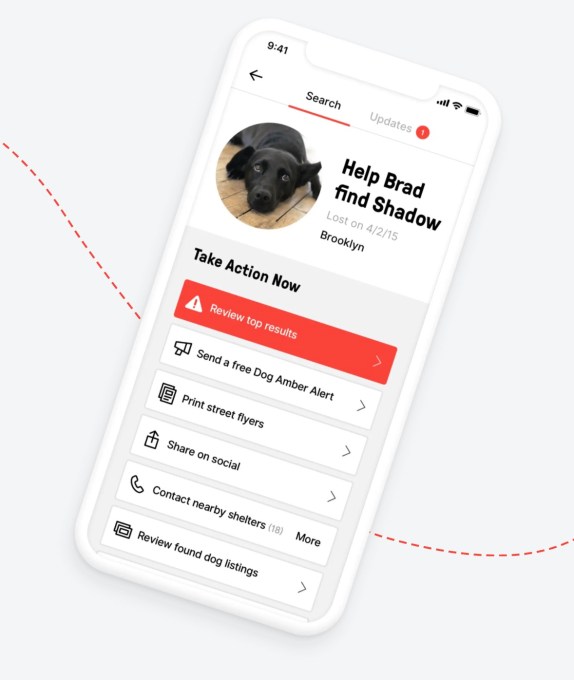 While Shadow is free to use, it makes money through a virtual tipping mechanism when it makes a successful match and the dog is found. It also offers users the ability to buy an Instagram ad in-app for $10. Here, Shadow provides the visual assets and manages the ad-buying process and placement process on owners’ behalf.

The startup, founded by former Zocdoc founder Cyrus Massoumi, has been in a sort of public stealth mode for a few years as it grew beyond its hometown of New York. It’s now offering dog-finding services in 76 counties across 20 U.S. states.

We should note that Massoumi’s exit from Zocdoc was complicated. He sued his co-founders and CFO for orchestrating a plot to oust him from the company during a Nov. 2015 board meeting, claiming fraud. The lawsuit detailed the internal strife inside Zocdoc at the time. A New York Supreme Court judge recently dismissed this lawsuit. (The ruling says the case needs to be filed in Delaware, instead of New York). A ruling was not determined due to this dismissal, and no new case is currently on file.

Ahead of this, Zocdoc had been accused by Business Insider of having developed a stressful, “bro culture,” in which young, male employees would make inappropriate remarks about the women who worked there. This was ahead of the larger rise of the #MeToo movement, which has since impacted how businesses address these issues in the workplace.

Massoumi disputes the claims were exactly as described by the article. The company had 300 salespeople at the time, and while he agrees some people may have acted inappropriately, he also believes the company’s response to those actions was handled properly.

“The allegations were fully investigated at Zocdoc and found to be without merit,” he told TechCrunch, adding that Zocdoc was repeatedly recognized as a “best place to work” while he was CEO. (There were never allegations against Massoumi, but ultimately, the buck stops with the CEO.)

Shadow today claims a different makeup. It has a team of 12 people, and two-thirds of its product and engineering team are women. Some Zocdoc investors have also returned to back Massoumi again.

Despite the complicated Zocdoc history, the work Shadow is doing is aiming to solve a problem many people do care about. Millions of pet owners lose their pets to euthanization as they end up at shelters that cannot keep animals indefinitely due to lack of space. Meanwhile, the current system of having lost-pet messages distributed across social media can mean many of those posts aren’t seen — especially in larger metros where there are numerous “lost pet” groups.

More than half of those were since the pandemic began, which saw many new pet owners and increased time spent outdoors with those pets, when dogs can sometimes get loose.

Massoumi says he was inspired to found Shadow after a friend lost his own dog, the namesake Shadow. It took the friend over a month to find the dog after both following false leads and being connected with people who tried to help him.

“I’m thinking to myself, this is something that happens 100 million times a year, globally … and for people who love pets, this is a lost family member,” Massoumi explains. “It seemed to me to be a similar problem that I’d already been solving in healthcare, where there’s fragmentation — people want to see the doctor and the doctor wants to see the patient, but there’s just not a central way to make it work,” he says.

More broadly, he wants to see technology being put to good use to solve problems that people actually care about.

“I think there needs to be more technology that injects the humanity back in what everyone does. I think that it’s very core that’s what we’re doing,” he says.

Shadow’s app is a free download on iOS and Android.

“We trained custom image models that allow us to automatically classify every photo we have with the breed of the dog and its color. The models return different labels and their likelihood, so using this information as well as other metadata such as location and date, we are able to algorithmically pair lost and found dogs in our system. We also utilize object detection to determine whether an animal is shown in a photo, the type of animal it is, and what portion of the image contains the animal. The detected object bounds of the animal is used to create a cropped photo of only the animal. We create a perceptual hash of the cropped photo to compare against other photo hashes in our system to detect duplicate photos. By hashing only the object in the photos, we’ve reduced the number of false negatives because we eliminate the portions of the same photo that may have been cropped differently by different users or sites.”

Correction: Article clarified after publication to indicate the lawsuit was technically “dismissed” as the ruling states that to proceed, it’s required the case to be filed in Delaware as per the nature of the allegations. Massoumi’s comments indicate he plans to refile.

Update: Dec. 13, 2021 — Already fraught with controversy due to the founder’s complicated exit and lawsuit with his prior biz, it seems Shadow didn’t make it a year. An angel investor in the company told us the company shut down in October, per its website, and the founder removed Shadow from his LinkedIn. While it’s normal for startups to close up shop, the investor noted this one happened fairly quickly — and quietly.